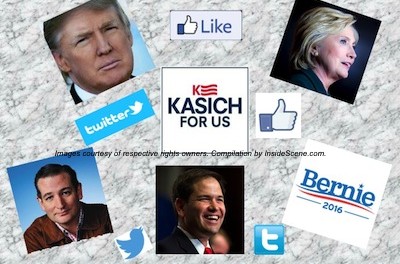 Social media became the media might for President Barack Obama, especially in the 2008 election. If social media is any indicator of a candidate’s popularity and how they may control the polls, below is a breakdown of the social media accounts as they currently stand for both the major Democratic and Republican candidates. As of March 5, 2016, this is what the figures reflected. Click on any of the numbers below in the box of each candidate to find their official accounts on Facebook and Twitter and follow their progress throughout the campaign from both parties for the seat in the Oval Office.

A candidate’s number of followers does not necessarily represent a “fan’s” adoration of the person running for office. Some follow social media accounts simply to monitor the candidate. Some candidates are using social media to not only spread their messages but also to attack other candidates, engaging in Facebook and Twitter wars with each other.

The candidate with the strongest social media pull between Twitter and Facebook is Donald Trump, who is also not a career politician, like the remainder of those in the running on both the Republican and Democratic tickets.

One candidate who did exit the race and has a strong pull on social media is Dr. Ben Carson. Carson has also never served in politics. Dr. Carson plans to continue in an advocate role as the National Chairman of My Faith Votes, and also in championing to repeal ObamaCare, through a grassroots movement. His Facebook fan base exceeds candidate Hillary Clinton’s by 2.4 million fans, though Clinton holds a greater following on Twitter. Clinton’s Twitter account, however, was started in April 2013, with Carson’s two months prior to that date.