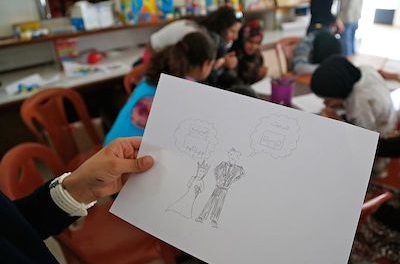 A child holds up a drawing in a Syrian refugee camp where she shows a young bride appearing sad and thinking of school, while a groom smiles and thinks of a home. Creative commons image.

I’m going to give a thumbs up to legislators in the New Jersey Assembly on both sides of the aisle for taking a bipartisan stand against underage marriages, something I didn’t know was even a problem in our state until an eye opening report came across my newsfeed from ABC today.

ABC’s Michelle Charlesworth tells the upsetting story of a young woman, now 26, named Naila Amin. Amin was a young American citizen with Pakistani roots. She was forced into marriage at 15…pledged by her parents to her cousin at age 8 that eventually she would be his bride. She was ushered out of New York (one of the other states now considering legislation) at age 15 to Pakistan by her mother and father and married off to her 28-year-old. There she endured physical and sexual abuse for five long months, before the U.S. State Department swooped in and removed her from the situation. Her own mother ignored her pleas, telling her daughter she “had no say.”

Her cousin would remind Amin that while it was her body, he “owned it.”

He confiscated her cell phone and passport.

After Amin’s rescue she received therapy and lived in group homes and in foster care.

The sick and sad thing is that if a judge gives the blessing, a child can be married off. And how easy is it too that a person could go under the radar and not seek a judge’s consent at all as in Amin’s case?

While Amin’s family is Islamic she was born at home in the Attock area of Pakistan, she told Reuters in 2015 that region follows the Pashtunwali code. In fact, Amin says that forced marriage is against the tenets of Islam and it’s rather a cultural issue when children are coerced into marriage.

Her family moved to New York City to connect with her father, a merchant marine.

She knew her husband “Tariq” her cousin as “lala,” which is a word for “big brother.” She said though per the laws of Islam, she was then technically his bride at age 13.

She understood early on that she “belonged” to “lala” and even a crush on a boy in fourth grade she knew she was “owned” and asked herself, “Why bother?” Especially, after watching her older brother be “emotionally blackmailed” as he married the female first cousin of her mother. Amin’s story then shows this is not just an issue for girls, but both sexes.

But she was a “normal” American kid, who even later had a boyfriend named Edy and her family bruised her up for that “offense.” Thankfully, Child Protective Services intervened in this case, or Amin might still be experiencing a life of servitude in Pakistan, or may not even be here to tell her tell. As a ward of the state in New York, she was being watched like a hawk. It was Edy who was the earth angel in fact that brought her case to the attention of her school after her first beating for dating him.

She ran away from home prior to being beaten for her relationship with Edy and then during her first round of foster care after that, never having had anything but halal food, she fled foster care back to her parents’ home. From there, the family purchased airline tickets in October 2004. She thought this might be the escape from her foster care and group homes where she didn’t fit in because of her cultural differences with the other kids. Plus, social workers didn’t know how to handle her case, which differed from the other children’s.

But then the “day a part of me died forever” arrived on Jan. 5, 2005 when she was married off. In a photo from that day when most brides are beaming with joy, Amin was in an ornate bridal outfit, with a look of dread on her face. She was able to avoid intercourse the first night by forming a barrier in their bed but not after that. Once, she made an excuse of having a kidney stone and her husband kept his hands off of her for a week out of those five months. When she would run away, both her own father and her husband would beat Amin and kick her head repeatedly after dragging her back, as her mother screamed endlessly.

Amin returned to the states, her father advising her husband that it was necessary for her to return to school. When Amin’s mother made her way back to the States eventually, police nabbed her.

A happy ending for Amin is she is now studying in a college program to become a social worker and to help young girls who have endured experiences as she did with honor-based violence. Her goal is to open up a group home where children who deal with this type of violence can receive the care and understanding to recover.

Click below for two eye-opening videos with Fraidy Reiss, the founder of Unchained at Last. She was a part of the Brooklyn Orthodox Jewish community. At age 19, nearly an “old maid” in the community (20 she says was “old”) and after seven dates she was married. From there, only a week later, she discovered an abusive man, who would later make threats to her and later to their daughters, that he would kill them all.

At age 27, she mustered up the courage to seek a restraining order from the police in her community against her husband. Eventually, she was able to free herself through divorce, after being trapped for many years. Since then, her family has declared her dead. Her rabbi and others wrote him off as a “young guy,” when she recounted the horrors of her ordeal. She received threats from people in her former community.

The woman on the second video with Reiss, named Alana, who also left the Orthodox Jewish community said her daughters thanked her for “setting them free.”

Reiss said the only one of the solutions to stop the practice of marriage for children is to remove exceptions from legislation to prevent marriages of children. The only state in our country that has banned it entirely is Virginia, which previously allowed it with consent at 16 and 17, and even younger for those who were mothers, or pregnant.

Another cultural group that says their marriages start typically at age 20 for young people had its own situation recently exposed in Rolling Stone, Lee Kaplan had young girls running around in blue dresses, and one neighbor grew suspicious. Police found there were a dozen of them up to 18 years old. The 18-year-old, he called his “wife.” Her parents , an Amish couple that had separated from the faith, “gave” their daughter to him as a “gift” four years before, and she bore two children with him, also among the group of girls. Family members who spoke on the basis of anonymity noticed the strange behavior and how enamored they were with Kaplan and couldn’t put a finger on it. The Amish community went to the Pennsylvania State Police with a complaint that the mother in the family was being held against her will and there was child neglect, and it was unfounded. Kaplan helped the girl’s father Daniel Stoltzfus from “financial ruin.” Stoltzfus Googled to make sure gifting his daughter was a legal “transaction,” he told police as part of his defense. Kaplan is 51. In Pennsylvania, this is statutory rape since this began when the girl was under the age of 15 and he is four years her senior. Both Kaplan and Stoltzfus, as well as Savilla, the wife. The rest of the girls there were the Stolftzfus’s nine other daughters. Plus they have a son at home who described Kaplan as a “good guy.”

None of the Stoltfus children, including the two youngsters born to the 18-year-old (the children were ages three and six months) had birth certificates and none of them have ever gone to school. And the girl who married him viewed Kaplan as her husband and told police that she also loved him.

An heroic woman named Jen Betz was the astute neighbor who recognized that there was something wrong and would occasionally see the scared kids walking in the yard, though most the time she said the young women stayed indoors. She had previously reported her observations to a child abuse hotline a few years prior, but there was no recourse at that time for Kaplan. Neighbors are praising her for her persistence in calling again.

According The Young Turks, 30 percent of women worldwide are married before they turn 18.

The Young Turks also says that this has been a problem in the Mormon community, and the towns of Hildale, UT and Colorado City, Ariz is under Department of Justice investigations. The Young Turks describe some of the practices similar to Sharia Law. As we know, the rules of Sharia Law don’t mesh with the current laws of the United States, though some have fought to apply them, including one judge in New Jersey’s Hudson County, Joseph Charles Jr. (also a former assemblyman)  who ruled that it was permissible for a man to sexually assault his wife since it was part of his Sharia Law culture. The woman herself a child bride, married her husband at 17 in Morocco before they emigrated to Bayonne, NJ.

We need to protect all of our children, female and male, from the practices mentioned in this story. Please encourage your legislators wherever you are in New Jersey to support Assembly Bill A3091, to prevent children from being allowed to enter into marriages or civil unions before the age of 18, whether parents or judges consent to it. In fact, the new legislation would override this consent. Click here to review this legislation in full.