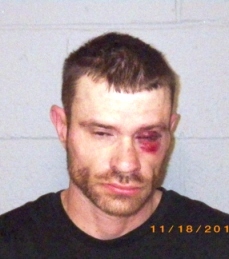 WHAT WAS TAKEN: Visa credit card was used fraudulently via Amazon

ANY OTHER INFORMATION: On 11/06/14 a victim came into headquarters to report someone used her credit card to buy items on Amazon.com.  She called Amazon. All they gave her was a name Wallace.  She believed it was her ex-boyfriend Wallace Krake.  Officer Bianculli spoke to Det. Sutphen who recently arrested Krake for burglary to a residence in Hopatcong. That was case 14-11103. Officer Bianculli tried to contact Wallace several times but Wallace would not return the phone calls.  Officer Bianculli wrote to Amazon to get the information. He found that Wallace Krake bought an Xenon colored headlight conversion kit, LED tail lamp, and 7 color LED glow underbody neon lights kit on three separate transactions. Officer Bianculli called for a warrant for Krake’s arrest. Judge Bowkley authorized the warrant with $16,000.00 bail.  Detective Tracey and Officer Bianculli began looking for Krake.  After several attempts they found his vehicle at the Netcong Heights apartments. The parts ordered from Amazon were on the car. Det. Tracey, Officer Bainculli and an Officer from Netcong went to different apartments until they found Krake.  The Officers entered the apartment with the arrest warrant and tried to arrest Krake. Krake resisted and said he was not going anywhere.  Krake would not give the Officers his hands.  A knife was taken from Krakes pocket by Officer Bianculli during the struggle to handcuff him. Krake was screaming that he was not going to be arrested. Officer Tracey assisted and punched Krake on the left side of his face two times. The officers were then able to handcuff him.  Later Krake apologized to Det. Tracey.  He stated that he has extreme anger issues and sees red when he fights with the police. Krake further stated that if he would have got free that would have been the end for the officers.  Krake complained of chest pains while at the Hopatcong Police Department. He was transported to Newton Hospital, checked out and released.  He was then taken to the Sussex County Jail.  The parts that he put on his car using the stolen credit card are going to be removed.