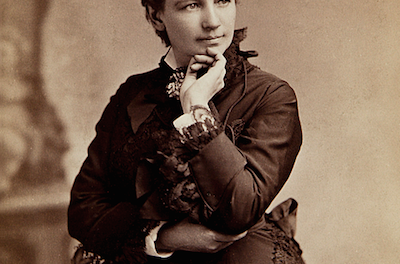 Major publications including USA Today have jumped on the bandwagon, because of statements made at the DNC (Democratic National Convention) that Hillary Clinton is the first female presidential nominee.

The one major news outlet that has it right is NBC, which notes properly that she is the first female nominated to a major party (aka Republican or Democrat).

USA Today’s headline was “How it felt when America got a first woman presidential nominee.”

USA Today acknowledged suffragists including those in 1848 at Seneca Falls’ first women’s right conference, and Elizabeth Cady Stanton’s conviction in 1872 for voting.

But what USA Today failed to acknowledge even once in its article is a very important name from the year Stanton was charged with voting for a Republican.

This was the year that the very first female presidential nominee put her hat in the race…and her running mate was also a man. Not just any man but famed African-American statesman and abolitionist, Frederick Douglass.

So, InsideScene.com would like to give credit where credit is due to the very first female presidential nominee…Victoria Woodhull.

This was also brought to InsideScene.com’s attention as several individuals shared an image on Facebook with the author, a special sign from Ohio honoring Woodhull.

Woodhull is not a huge mystery that journalists at USA Today need to seek high and low for. In fact, a simple Wikipedia search and page reveals who she is (click here and her name lands at the top of the list of party nominees).

Victoria Claflin Woodhull was born in 1838 and was one of the first women suffragists, activists for rights for women and a journalist.

What did Woodhull represent? She was a “free love” advocate, meaning that she believed women should have the right to marry and divorce, and also to have children, without the government butting itself in.

Papers called the daring woman who wore a hat much like Abraham Lincoln’s, and was photographed by his photographer Matthew Brady, “obscene and libidinous.”

She ended up in federal prison for writing about minister Henry Ward Beecher’s affair with a member of his flock, because she used the mail to disseminate “obscene materials.”

But she held a disdain for the double standard that she saw when it came to cheating, that it was acceptable and considered desirable by society for a man to engage in affairs, but women were demonized and were stuck in loveless marriages with philanderers.

She disliked the exploitation of women in the field of prostitution, and was outspoken against the vocation, and rumor has it her sister was forced into the industry. A Woodhull myth is that she was a prostitute, yet no arrest records exist. It was the Chicago Mail, a paper known to smear her, that started these rumors of former publications of her improprieties, but none have ever been found.

Yet, even while discussing such a brash subject, the papers reported that she did so delicately as one would expect from a “sweet-voiced woman.”

This was a subject close to Woodhull’s heart as she was the victim of an affair in her first marriage. Her husband, Canning Woodhull, was 28, 14 years her senior, and a doctor. They married the following year, and she soon learned, her husband not only suffered from a drinking problem, but a roving eye problem. She remarried in 1866 to Union Colonel James Harvey Blood. And eventually, she would divorce Blood and after relocating to England, she married banker John Biddulph Martin in 1883.They remained married until his death in 1901.

In addition to advocacy for females, she was a stockbroker, news editor, and member of First International, because of her abolitionist stance. But later, the group succumbed to the Marxist ideologies and kicked out its U.S. members.

She was also anti-abortion, noting. “The rights of children as individuals begin when they remain in the fetus.” She considered abortion a “symptom of a more deep-seated disorder of the social state.” Strangely, she supported eugenics, much like pro-abortionist and Planned Parenthood founder Margaret Sanger. It is believed she was in support of this due to one of her son’s severe developmental disabilities, which she attributed to her first husband’s alcoholism.

Her religious affiliation was “Spiritualist,” a popular denomination following the Civil War.

It was the Equal Rights Party that made Woodhull its nominee in 1872. Some argue this stating she was too young to run, though others say that age was not an issue.

The Equal Rights Party evolved prior to her nomination and after. It was around in the 1830s and known as the “Locofocos.” It was later called the Anti-Rent Party. Following Woodhull’s nomination, Belva Ann Lockwood became the second female nominated in both 1884 and 1888 under the party’s new name, the “National Equal Rights Party.”

Click for a report of Woodhull & Claflin’s Weekly’s coverage of the Equal Rights Convention. Susan B. Anthony and Stanton were also involved. This was not where Woodhull was nominated but where women were lauded, most especially Woodhull, and the party platform was discussed.

While Douglass was nominated, he was not in attendance at the convention, and reportedly did not formally accept his run with her. The double nomination of a white female and black male stirred the pot of anti-Civil Right’ers.

It was Woodhull’s exposure of the affair between Beecher and Elizabeth Tilton in Woodhull & Clafin’s Weekly that led to her arrest, along with Blood’s and her sister’s Tennie C. Claflin, and landed her in jail during the election.

Later, her trial resulted in a hung jury. Tilton’s husband Theodore, a fellow abolitionist, Beecher’s assistant and news editor eventually sued Beecher on the grounds of “alienation of affection” and “criminal intimacy.” Beecher was acquitted of the charges.

Cady Stanton referred to Beecher’s exonerations by his church, which oversaw his final court hearing as a “holocaust of womanhood.”