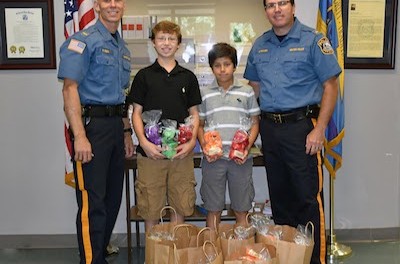 NEWTON, NJ – The Newton Police Department was fortunate to receive a donation of about 100 teddy bears from an incoming Newton High School Freshman; the bears were donated for Officers to give to children who we often come in contact with at difficult times in hopes that it will ease their experience.

Stefano Montalvo, the Valedictorian of Andover’s Long Pond School, will be joining the 9th grade class at Newton High School this fall.  In preparation for his trip to the Fiji Islands, New Zealand and Australia through the People to People Student Travel Program, Stefano raised funds and sought donations of bears in support of his summer trip to the southern hemisphere.  Stefano, with assistance from his younger brother, Sebastian, was supported by many local businesses and shoppers at Walmart, who donated money and personally chose a name for each bear, which was affixed to each new bear donated to the Police Department.

Stefano stated that aside from raising money to support his educational trip to learn about new places and experience other cultures, he wanted to give back to his community and thought that these bears would help to comfort children.

Chief Mike Richards applauds Stefano’s efforts and expressed the department’s appreciation to him.  In fact, there are many times children accompany parents to the Police station who have been involved in domestic violence, have been victims of crime or have been involved in a motor vehicle accident.  These are emotionally charged incidents for anyone and we try to be especially mindful of how it affects children.  The bears will be a great resource for the Police Officers who will carry some in their patrol cars and have them on hand at the station.

Stefano Montalvo and his younger brother, Sebastian, were accompanied to the Police station by their mother, Gloria Febres, who was rightly very proud of their accomplishments and community involvement.  Shown in the photograph (left to right) are Lt. Robert E. Osborn, Jr., Stefano Montalvo, Sebastian Montalvo and Chief Mike Richards in the lobby of the Newton Police station.  #newtonnjschool