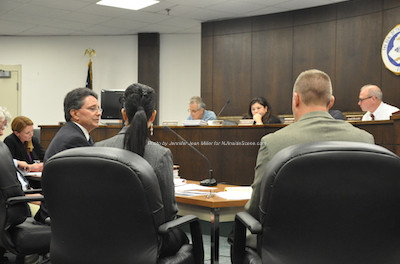 NEWTON, NJ – Iliff Camps & Clinics, LLC received minor site plan approval, after seeking preliminary and final site plan approval at the Wednesday, August 19 to transform its daycare center and “funplex” to three separate businesses that it will own under the same roof including: a daycare center, buffet restaurant and retail store.

Iliff Camps & Clinics, LLC currently owns Camp Iliff in Newton at 280 Spring Street, tucked behind the Spring Street Station House Plaza. It is a supersized center that presently houses a daycare facility and “funplex,” with the “funplex” a longtime host to birthday parties and open play, with large inflatables, a rock climbing wall, a two-story play center, a roller rink and more.

Theresa Iliff is the business owner, who has overseen the same location for about 14 years. With the application, Iliff will maintain one business with three separate uses. The business names will include: “It’z-a-Daycare,” “It’z-a-Buffet,” and “It’z-a-Dollar.”

Both Iliff and her engineer, Jason Dunn of Dykstra Associates, testified about the application. Their testimony began at approximately 9:30 p.m., with the professionals representing the previous applicant on the agenda MNA Newton Realty, LLC for Taco Bell, continuing their discussion about the proposed Taco Bell until September 23 (click here for the article). That party voluntarily postponed their discussion since no new business is allowed after 10:30 p.m. and the group offered to wait to enable Iliff to take her turn.

Iliff said that the business currently maintains a daycare facility from about 6:30 a.m. until 7 p.m., Monday through Friday and is open for parties for the family fun center on Saturdays from about 10 a.m. until 8 p.m. Children walk or are bussed on the business’s private bus during the school week. Over the summers, the business operates as a daycare and summer camp.

The daycare under the new plan will be located to the right with a separate entrance and awning, located adjacent to Sparta Avenue. In the center, Iliff plans to maintain an “all-you-can-eat” buffet, which will have a separate party room for private parties. She described her planned restaurant with a Golden Corral type of feel. On the left side of the building where the roller rink currently exists, she plans to repurpose into her dollar store, which she said all items will cost a dollar, in spite of some stores implementing “Dollar” in the name and charging prices beyond.

The inflatables and the like will no longer be a part of the facility and the daycare entrance will be locked down with no access from the general public permitted. The door would be opened only when deliveries would come in to the facility. When questioned about that, Iliff explained her facility currently accepts deliveries, even with the daycare present. However, deliveries are a challenge because they must enter through the double doors and wind through the ramp-style hallways to haul in supplies, such as beverages and paper goods.

The current building already has the kitchen, due to the building’s Noble Roman’s Pizza franchise. Iliff testified that when the had the building constructed, there were three separate HVAC systems installed, with the building designed for the potential of repurposing it into separate businesses. She said that there would be modifications to the kitchen, including a new hood, but it would be minor. There will also be a walk-in refrigerator and freezer, as well as storage for dry goods. The exhaust would exit through the roof. The restaurant itself would seat 90 people, with a pay and drink station in the front. From there, guests could serve themselves at the buffet. The buffet would have features like a carving station, salad bar, pasta bar, taco bar, frozen yogurt station and other stations to choose from. The fare would be American favorites, plus some other choices like Chinese and Mexican. Wait staff is planned to walk around with hors d’oeuvres to offer to guests. 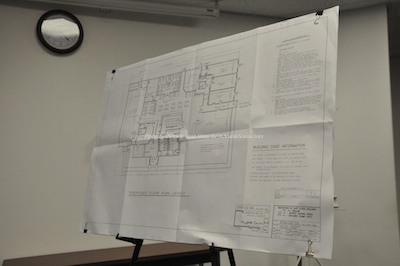 The site plan for the current Camp Iliff property, which will transform into three separate uses for one business; daycare, buffet restaurant and dollar store. Photo by Jennifer Jean Miller.

While Iliff said that there have been questions that she would be the third dollar store in town, she said in essence she would only be the second, with the other on Spring Street. The dollar store would not require much alteration to the existing portion of the building, with racks installed and other items necessary for the retail operation.

She said she plans on more mulch in the islands at the entrance, new sidewalks, new sheetrock for the kitchen, new paint and new classrooms for the daycare.

A new sign will be on the property near Sparta Avenue, in a location that she said would not be distracting and with a message board. She said she wished to use the sign to establish a “hometown feel,” like the Carpet Gallery’s sign that offers congratulatory messages about locals. The sign will not be used to advertise other businesses, but might advertise messages for non-profit groups such as churches. It would be a digital and immobile sign, with a change in the message every 15 seconds, which is the minimum suggested to avoid driver distraction. The sign may have some minor animation, but no video as some signs now do, however she noted that she would control the dimness of it in order to prevent it from becoming a disturbance.

In terms of lighting for the area, Iliff said that the lighting is currently set for business hours, although lights are turned off around 11 p.m. around her facility. She said between her lighting and cameras onsite, her facility has been helpful to the Newton Police Department.

Town Manager Thomas S. Russo, Jr. asked Iliff about the business hours. The daycare center would maintain its same hours as it does now and would be closed for the weekends. She said that buffet would be open during the week from about 11 a.m. until 10 p.m. Mondays through Fridays. On Saturdays, she would like to have the buffet open from 11 a.m. until 10 p.m. On Sundays, she would like to have the restaurant open from 10 a.m. until 7 p.m. The retail area would be open Mondays through Saturdays 9 a.m. until 9 p.m. and Sundays 9 a.m. until 7 p.m. The businesses will be closed on major holidays.

When asked about snow removal, Iliff explained that currently she and the Station House Plaza both have their snow contractors move the snow near the adjacent detention basin.

Deliveries would be before 11 a.m. and could vary between a small or large truck as they have currently been. Iliff was asked if trucks could be smaller, but she said truck sizes presently differ and were sometimes out of control, especially for a company like the Pepsi delivery, which may stop at her facility as well as others, such as G&S and Hayek’s on the same route. Iliff said deliveries would be around normal business hours to avoid the traffic that enters and exits from the daycare as parents are dropping off their children. She said that she expects deliveries for the three new businesses will be no more than once weekly, with potential for only twice monthly deliveries.

Planning board member Helen Le Frois asked if there will be separate restroom facilities for the daycare and restaurant and Iliff replied that there would be. Currently, there are several separate sections with restrooms in the building, including ladies’ and men’s rooms up front in the center, where the restaurant is planned. For the daycare, state law requires one toilet and one sink for every 35 kids. Currently, she has 33 children enrolled. However, Iliff said that she will be reducing the daycare to about 20 children only. There is a junior and full size toilet in the daycare area, including one in a classroom.

The applicants were seeking a design waiver for the sign as well as some of the landscaping.

Planning board member Kent Hardmeyer asked if Iliff could do some maintenance by the grassy area facing the Moose Lodge property by the former rail bed, an area where the unemployment office is also slated to go. Iliff said that she had plans down the road to work on that area.

The town’s planner Jessica Caldwell said that there would be no change to the footprint and with the change of maximum seating for the restaurant, which was initially 92 people and reduced, no parking lot waiver was needed. She said that the freestanding sign meets the requirements and could be set to flash a message no more than every 15 seconds, with the brightness dimmed. The canopy for the daycare center Caldwell said was not in the applicant’s initial package, but as long as it did not exceed four feet, it was acceptable and within limits, meeting the design waiver.

Frank Leone, who owns the Station House Plaza and is the pastor of Christ Community Church said that he and Iliff have a good working relationship. They could not find the deed that shows the legal responsibility for maintenance of the general traffic flow of their shared driveway. He was concerned about the wear and tear on the driveway from large tractor trailers and impact on other businesses in his plaza, which retailers and other businesses begin their hours at about 8:30 a.m. to 9 a.m. Leone’s other concern was the business hours on Sundays, which he said may impact his congregation, which begins to arrive to church around 9:30 a.m. and finishes at about 11:30 a.m. or noon.

Iliff said she has compromised as much as possible to be fair to the church and will adjust as much as she possibly can, without impacting her business. She said that the funplex is currently allowed to open as early as 9 a.m. on Sundays, and even seven days weekly, but she has not to help accommodate the church parishioners.