Stanley Praimnath and Brian Clark, who became friends after Clark rescued Praimnath on 9/11/01, marvel at the condition of Praimnath's shoes from the events that day. Image courtesy of Guideposts/YouTube.

The morning of Sept. 11, 2001 started out as a normal day for both Stanley Praimnath and Brian Clark, as they were working in the World Trade Center’s South Tower on the 81st and 84th Floors. Both were executives; Prainmath worked for Fuji Bank and Clark, Euro Brokers.

That morning as Clark was in his office, he caught a fireball from the corner of his eye from the North Tower, and scurried into action, gearing up and beginning evacuations for members of his staff. A member of his team became overwhelmed with grief after witnessing jumpers plunge to their deaths from the ravaged North Tower. Clark took her in his arms and the two headed for the ladies’ room in order to help her through the tragedy. He credits this incident with saving the both of them, as they were on the opposite side of the tower in the ladies’ room when United Airlines Flight 175 hit the building where both he and the crying woman had first connected.

Like Welles Crowther (click here for our story) another 9/11 hero who sadly lost his life and has the forever legacy of ushering people to safety as “The Man in the Red Bandana,” Clark, who was 20 floors beneath Crowther (the plane’s girth covered the 75th through 85th floors, with both Prainmath and Clark’s workplaces in the middle of the smoldering fuselage), met with seven other survivors towards the same stairwell that Crowther had navigated displaced workers down, Stairway A. This was the only functional exit following the impact. It was an ideal choice for Clark, as the elevator was on fire and the other two stairwells were not navigable.

Only moments before, Stanley Praimnath had witnessed American Airlines Flight 11 pummel the North Tower and began to flee his office, when World Trade Center security urged workers to stay calm and return to their posts, that their building was safe.

While back in his office, a startled Praimnath looked up as United Airlines Flight 175 careened towards him. As a person deeply rooted in his Christian faith, he quickly found his way under his desk and cried out, “Lord, I can’t do this! You take over!”

And that was what happened as the desk safeguarded Praimnath while the plane’s left wing was stuck in a door 20 feet from where he was hiding and crossed through his office.

But Praimnath couldn’t move with debris pinning him within the ruins. 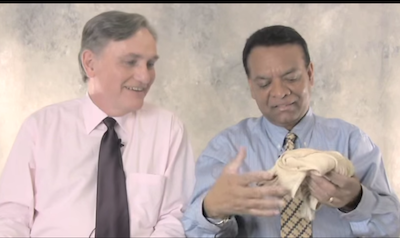 Stanley Praimnath holds up his tattered undershirt that covered his torso on 9/11/01, which he keeps with a pair of shoes and prescription that helped him through that difficult day when the two became friends. Image courtesy of Guideposts/YouTube.

While Clark and several co-workers headed down, others climbed up the stairway. At that point, they also considered climbing to the roof, but decided to descend. Along with money market broker Ron DiFrancesco, Clark heard a cry for help and exited the stairwell on the 81st floor. Clark illuminated the area with his flashlight and followed the voice, which was coming from behind a partial wall. Clark guided Praimnath and told him his only option was through a gap that was on top of the wall. While Praimnath did not succeed with his first attempt, Clark was able to seize his hands and pull him through. Here he was greeted with Praimnath, now wearing only an undershirt, his pants and shoes, while somehow his dress shirt had disappeared after he was buried under the debris. To this day, he is not sure how he lost his shirt.

The two headed for the stairwell. Many co-workers, including DiFrancesco listened to the rumors that the stairway was blocked, and returned to the roof. DiFrancesco was one of the fortunate ones who surmised, “For the grace of God, somebody led me out.” He and IT manager Richard Fern who escaped the burning elevator, fled the building with moments to spare before the South Tower collapsed just before 10 a.m.

For Praimnath and Clark, the pair stuck together and persisted through debris fields on the stairway and made it to the street. Only 18 total survived from above the plane that day, and they were among them. They continued to walk and then turned back, with Praimnath suggesting that the building could collapse. As Clark replied about the strength of the steel structure, the tower began to buckle and roll down into the ground. The pair ran for their lives as the dust cloud engulfed them, and jumped into 42 Broadway for safety.

The two men swapped business cards, and Praimnath headed to the hospital due to the injuries from the impact, plus having injured his hand on a nail as he scaled the wall. Clark returned to New Jersey.

Praimnath connected with Clark on the phone following his hospital discharge early on Sept. 12 and the two have been inseparable since. As “blood brothers,” the friends have told their story together for various news outlets, and Clark invited Praimnath and his spouse to sit at his table on his daughter’s wedding day. Clark retired from Euro Brokers and Praimnath, who was working at the Bank of Scotland as of 2011, is also an Assemblies of God pastor.

The two reunited for an interview to share their story and Praimnath unveiled a surprise for his dear friend that Clark had no idea Praimnath kept. Praimnath credits God’s grace and Clark’s response to his cries that the reason he is a survivor.

During the interview, Praimnath revealed his undershirt that he wore that day, which he described as if it had been through a shredder. He keeps it boxed up along with his dust-covered shoes that helped to walk him to safety that day, with part of the sole obliterated from the conditions they faced. Praimnath said wife Jenny often complained to him those shoes were ugly, but he feels he would not have been able to walk without them that day. He has since asked his wife that if he ever strays from God, that she should bring him this box as a reminder of how God delivered him safely from harm on Sept. 11, 2001. He also keeps a prescription that should have tranquilized Praimnath but instead calmed him slightly for his adrenaline was pumping so fiercely in the aftermath.

“I want it to be a reminder,” Praimnath said of the box with these significant items.

Enjoy the full video below and Guideposts testimony of Praimnath, Clark and their enduring and special friendship.