Pathmark in Jefferson, which has had some of the most competitive pricing in the area recently on milk. Photo by Jennifer Jean Miller.

SUSSEX COUNTY, NJ – Over the years, and especially this year, the price of milk in the fluid form has continued to rise.

In our state, milk prices have not reached that price, though I was shocked a couple of weeks ago to learn that in Hawaii, a gallon of milk runs for approximately $9.40 and $.9.99 a gallon. The milk was on sale from about $7.99 to $8.99 a gallon because of the two hurricanes they had near the islands.

I can’t imagine paying nearly $10 a gallon for milk, especially with how my family drinks it…then again, could I have imagined paying about $4 per gallon several years ago?

According to the New York Post, milk prices have doubled since 2009, when they were then approximately $2 per gallon (this article notes about $2.88).

Some of the main issues affecting milk prices of late includes: droughts in the Midwest, and the surge in pricing due to exports to China.

Reuters reported the same, especially about the exports. According to Reuters, the demand last year from China, equaled production in the U.S., European, Australia, and New Zealand. China exports milk from our country in the form of milk powders, which still has an impact on fluid milks. 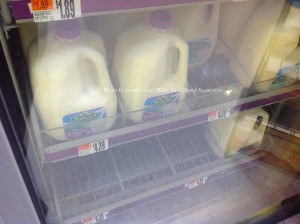 Tuscan Milks at the Stop & Shop in Sparta. Photo by Jennifer Jean Miller.

Reuters said pricing should be stabilizing within this summer as production is equalized, and this is a short-lived crisis.

In China, on the other hand, the purchases were due food issues with melamine added to baby formula in 2008, that killed a few children, and made thousands sick. Additionally, a botulism scare, and other issues contributed to the need to up milk production. Click here to read this article from Reuters in New Zealand, about the crisis. Accordingly, China has slowed down on its purchasing and has now amassed a stockpile, which in turn, will stabilize their supply of what has been referred to as “white gold.”

This cycle, on the other hand, has set a new precedence, with all of us acclimated to such a high cost for our products. Supply and demand. It would be nice if the prices would lower again, though I would be surprised if that happens.

So what are things like today? I checked out prices in our area, of some of the common and larger shops where residents may purchase milk. These prices are some of the general assessments, with some of the prices gathered as early as August 9, 2014, and some as recent as this evening.

First, remember if you’re doing a price comparison between brands of milk, and stores, to also check the unit price on the milk, which is often measured in price per quart. Click here to check out my article about unit pricing, which explains how to evaluate costs based on this pricing measure.

Below is a summary of my results:

There are, however, some important points to note with these prices.

The prices here, of course, can change soon due to market fluctuations. They can also change with sales, so be sure to check your sales flyers in the stores, look out for potential savings in register coupons, and more, for best buys. Use them as a gauge to determine where you may find the best deal when milk shopping. And if you know that you’ll be in a particular neighborhood mentioned in this story, where the prices are decent on milk, you can plan accordingly to purchase. 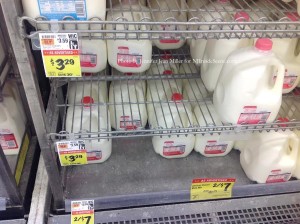 Although these are prices from days gone by, hopefully, some of these suggestions here can help you to find savings on this item, which is one that likely many will purchase regularly.

Do you have a favorite place to buy milk that offers great savings, and is not mentioned in this article? We’d love to hear from you! Post your comments to this article directly, or on the Facebook Post where it is located…or email us at: editor@insidescene.com.

Stay on the scene with NJInsideScene.com, and continue to follow us by clicking here to find us on Facebook.