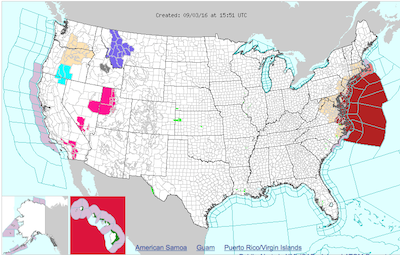 Hermine's path is the red mass along the east coast, as her wrath overtakes the coast in its post-tropical cyclone form. Image courtesy of the National Weather Service.

“Hermine,” which has now been classified as a “Post-Tropical Cyclone,” has been triggering advisories for locations along the Eastern seaboard.

At 11 a.m. today, the National Weather Service, in addition to its summary for the areas from Virginia through New Jersey, spelled out some changes.

A Tropical Storm Warning for:

Additionally, a Tropical Storm Watch has been issued for:

When the National Weather Service update was release, Hermine was located offshore of the Outer Banks along the North Carolina Coast, heading east and northeast at about 15 mph. Hermine will exit the North Carolina coastline by Monday morning, and make its way towards the Delmarva Peninsula (Delaware/Maryland/Virginia).

Wind gusts have been reported between 44 mph and 73 mph at varying locations. The maximum average wind speed expected will be about 65 mph.

The National Weather Service describes the anticipated storm surge coming to places like Sandy Hook as “large and dangerous waves,” with a “danger of life threatening inundation during the next few hours in the Hampton Roads [North Carolina and Virginia] region, and in the next 36 from Chincoteague, Virginia to Sandy Hook, New Jersey.”

The National Weather Service suggests that there will be life=threatening inundation during the next 48 hours between Sandy Hook and Bridgport, Conn.

“Persons within these areas should take all necessary actions to protect life and property from rising water,” the outlook added. “Promptly follow all instructions, including evacuation orders, from local officials.”

Peak surges at high tide are expected at:

Hermine will leave Virginia and Maryland with about four to seven inches of rain, with about one to four inches along Eastern New Jersey, Southern Delaware and Long Island by Monday.

The local news stations including WAVY has provided images of the wrath that Hermine is already causing in Hampton Roads, including an overturned tractor trailer on the Alligator Bridge, with its cab crumpled. Below is a video from Joe Fisher of WAVY.

The article provides embedded video footage from the City of Hampton’s Police Chief of the storm surge. It is below from the Fort Monroe sea wall in Virginia.

Take a ride on the Fort Monroe sea wall with the Police Chief. (Don’t try yourself!) pic.twitter.com/ncSbWb37Ov

The Richmond Times-Dispatch has noted that Hermine has left 58,000 residents without power in the region of Virginia’s southeast.