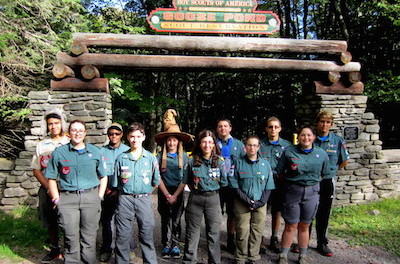 SUSSEX COUNTY – The weekend of September 18-21, Byram Township’s Venturing Crew 276 attended the 2015 Harry Potter themed Insomniac’s Revenge at Goosepond Scout Reservation. What is Insomniac’s Revenge? This insane camping experience gives each scout the opportunity to stay up from Friday night to Sunday morning with nonstop activities and games.

Round the clock Harry Potter themed activities were being conducted such as make your own wand, potion making and even geocaching. Campers were also given the opportunity to participate in camp-wide tug-of-war, quidditch, wizard chess, and the infamous Tri-Wizard tournament! Like in the world of Harry Potter, there were four houses that scouts could be a member of: Krackenblood, Bearclaw, Falconcrest, and Fisher Fang. The four houses competed in a race to the finish line during the Tri-Wizard tournament.

It wouldn’t be a weekend without candy though! Goosepond Scout Reservation didn’t just provide any ordinary candy, however. They provided some yummy Harry Potter inspired treats like Chocolate Frogs, Butter Beer, and even Bertie Botts Every Flavor Beans. Watch out though! Those beans include some nasty flavors, like bacon.

While site guides led their magical activities, the race to find the most disgusting bean in camp was underway. Normally people would avoid trying to find this gross bean, but the prize was the camp’s sorting hat! Eating a nasty bean for that prize is completely worth it. In fact, a member of Crew 276, Jennifer Sarcona, found the bean herself and won the sorting hat! In response to the flavor of the bean she said, “I could feel it in my nose. If I think about it hard enough I can still taste it.” She then proceeded to gag. Obviously this is not a flavor people want to try.

Overall, the weekend was spectacular, mischievous, and magical. It only makes sense that crazy Venturers would host and attend such a crazy weekend. We can’t wait for next year!