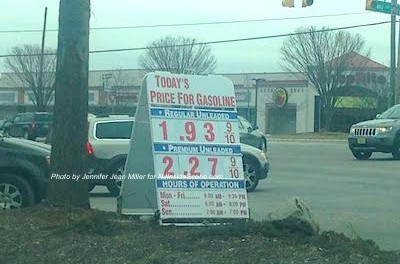 NEW JERSEY – The buzz over these past days on social media and offline has been over the excitement that fuel in many places in our area is now under $2.00 per gallon.

A few months back I’d written an article about Searching for the Lowest Prices at the Pump. At the time, I had planned a follow up article about purchasing fuel at Costco, but other stories took me away from it. So, now I’m returning to the topic…with even better news.

The article I’d written and photo I’d taken, however, shows how positively prices have progressed. The photo below shows a price for gasoline right after Labor Day, when we stopped to Costco before our last jaunt to the Jersey Shore at the Wharton Costco at $3.1o per gallon. According to what I’d written in my original article, prices in New Jersey in Sept. 2014 were averaging $3.271 per gallon, which actually wasn’t bad compared to our neighbors in Pennsylvania (ranking 27 of 50 states at $3.469 per gallon) and New York (then 42 of 50 at $3.683 per gallon). 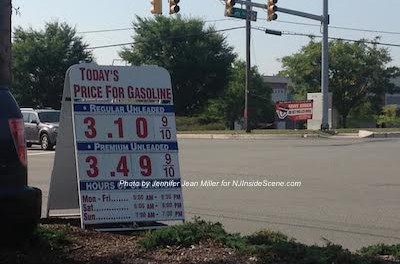 A site I promoted in my first article and that I’ll be pushing again is Gas Buddy, which is user generated in most cases with prices input by those using the Gas Buddy app or site to let others know what they have paid or may have seen in terms of pricing as they passed stations on their routes. For their inputs, GasBuddy.com participants are eligible to win prizes, including free gas cards. One offering currently on the site is for a $100 card.

How to use GasBuddy.com to learn of the gas prices at service stations around your area? Simply plug in your zip code on the home page. If I put in the Newton, NJ zip of 07860, it shows that the Busy Bee in Newton has the lowest price of $1.95 per gallon for regular…however, that price is for cash and the price will likely be higher for credit. Prices rise incrementally with the highest on the list currently displayed at $2.08 per gallon for the Gulf near Limecrest Road in Andover Township, which was coincidentally the station I photographed for my Aug. 26, 2014 article, and was then $3.19 per gallon. What a difference a few months can make!

For those of you watching your pennies at the pump, I highly recommend Costco for fuel. There are a few caveats though to gassing up at Costco. First, is membership…the pumps are open for members only. Costco also not accept cash — this retailer accepts most debit cards with pins and American Express. A cool perk for members who opt for the Costco Membership Card with the American Express card rolled into one, is the ability to pay for gas at the station and then earn cash back on purchases, including fuel, because of this card (3% cash back…not bad…click here for info.).

One exception for non-members to purchase fuel is if they have a Costco Cash Card, let’s say, if someone gifted it to them to be used to try out or make purchases at Costco.

Now, I don’t recommend riding to Costco from our area if you don’t have a mission down there already to head to Costco, the mall or another destination down there. However, if you do, it’s the best bet in the area for fuel prices.

Another cool thing about Costco’s stations is the expediency with a fuel purchase. Some may be deterred because the entry to the pumps is one way and so the lines might look massive sometimes. I can tell you the line, however, does not take long. What is genius about their system is the fact that they don’t take cash, so there’s no fishing for cash or change and it’s a quick zip of the card (and the cardholder may have to exit the vehicle for debit purchases to input the pin).

What is also cool is that the hoses are long enough so the gas tank can be accessed from either side of the pump. I’ve got my geography memorized as to which side of the car the tank is on, but don’t we all have one of those days, where you pull up to a pump in forgetfulness and realize that you’re on the wrong side? Then have to locate another one pump? No fun when that happens Or, what if the pumps are crowded and your car is nose to nose with another car — and they practically pull into your front end when they whip in?

I can say, the Costco system is more efficient because there is no jockeying around for a spot at the pump — everyone is heading in the same direction and then simply can exit.

Click here for the full Q & A about purchasing gas at Costco in terms of payment, process and the quality.

What is great is that the GasBuddy.com site has a page for New Jersey Gas Prices for Costco only (the site is also under the url NewJerseyGasPrices.com). Click here to access the Costco Page, which lists the Wharton Costco today at $1.87 per gallon. My featured photo for this article was taken two days ago on Wed., Jan. 14, when gas was priced at $1.93 per gallon for regular. That is quite a decline over only 48 hours.

Wharton Costco is not the lowest of all the Costcos and, to the contrary, is on one of the higher ends. Costco locations in Wayne and Clifton are showing $1.69 per gallon…for those by the shore areas, Ocean is $1.82 per gallon and $1.84 per gallon in Brick.

Sure beats the prices I recorded right after Labor Day at the Costco locations…which were then the best around, with Brick at $3.14. Manahawkin was charging $3.15 per gallon and today is $1.93 per gallon…the highest of all the Costcos for regular unleaded.