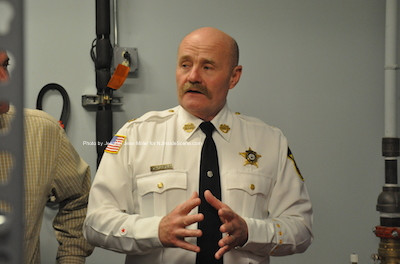 Strada and members of the Sheriff’s Office gave tours of the facility to the almost 100 attendees at the event.

The facility is staffed 24 hours each day with three employees during the daytime and two on duty overnight.

“We have the ability to bring in more dispatchers,” Strada added.

The groundbreaking for the communications center was in Dec. 2012, when the center was acquired. It was formerly the county’s juvenile detention center and came with the price tag of $1 million. Previously, a project was conceptualized to create a new countywide center, which municipalities did not receive warmly, with an estimated cost of $7 million. 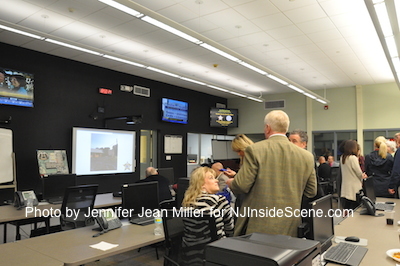 The new facility communicates with nine other county microwave towers to transfer communications. There are redundancies in the communications, in case one mode is down, said Undersheriff Keith Armstrong.

Armstrong led the tours of the center, which he told visitors is also hurricane and earthquake proof. The center became a main communications source during Superstorm Sandy.

In the new communications center, there are 10 workstations for the expansion of a greater workforce, in addition to the phones and computers in the main area of the building. Calls are handled in rotation between the Sheriff’s Office in Newton and the center in Frankford. One supervisor is stationed on each shift.

Dispatchers are equipped with stations that have map views, the ability to give instructions to callers during emergencies, and NCIC (National Crime Information Center) background checks. Additionally, a radio screen enables the center to monitor local police, fire and EMS channels, as well as sound out tones to agencies via touch screen.

The climate-controlled equipment room hosts the immense servers that maintain the computers. Diesel and natural gas help to provide generator power, which kicks on in times of power outages.