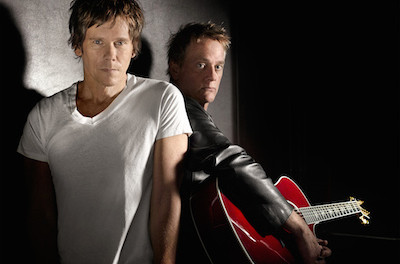 The Bacon Brothers, Kevin and Michael Bacon, will be appearing at The Newton Theatre. Image provided.

The Bacon Brothers are anything but a typical rock band. Brothers Michael and Kevin Bacon, each accomplished in their own right, play gritty rock that is unapologetically unique and authentic. Their style can best be described by their first album title, Forosoco, a word describing the blend of folk, rock, soul and country influences. Now, nearly 20 years later, The Bacon Brothers continue to impress audiences and critics with their soulful sound and their latest offering of Americana, 36 Cents.Older brother Michael, an acclaimed musician and composer, and younger brother Kevin, an award-winning actor, combine to form The Bacon Brothers. Their childhood hometown of Philadelphia is the brothers’ muse for their eclectic blend of rock and soul. Growing up in the City of Brotherly Love, Michael and Kevin were surrounded by music from an early age.Michael started as a career musician in the 1960s, first playing gigs at Philadelphia’s Electric Factory with younger brother Kevin tagging along. He later moved to Nashville to pursue songwriting, and his musical career took off. Now, an Emmy Award-winning composer, Michael is credited with many original scores for film and television.   Kevin always loved music but chose a different path. He’s best known for his acting roles in The Following on TV, and on the big screen in Footloose, A Few Good Men, Mystic River, X-Men: First Class, Flatliners and Apollo 13. Kevin has appeared in 80 films and has a Golden Globe win along with several Emmy and Screen Actor’s Guild nominations.Now, two decades after the band formed in 1995, The Bacon Brothers are a musical force to be reckoned with. Don’t let Kevin’s roots in Hollywood fool you. According to The New Yorker, “Hollywood hangs like an albatross around the neck of any movie star turned musician, but this duo shakes off the burden of fame with sharply executed rock that has a blue-collar, rootsy edge.” With the release of their seventh album, 36 Cents, it’s a new era for the Bacon Brothers. With new connections in Nashville and tour dates across the country, The Bacon Brothers may no longer be one of the industry’s best kept secrets.

“I like risks,” notes Kevin, a classic understatement from an artist who’s played challenging, unsympathetic roles in everything from The Woodsman to Sleepers to Oliver Stone’s JFK. “And there’s nothing more risky about being a well known actor and playing in a rock band.” But there’s the interesting thing about risks—sometimes they pay off. And for The Bacon Brothers, they certainly have.