As the 15th anniversary nears of the terror attacks against the United States on Sept.11, 2001, stories of valor continue to be shared about people from all walks of life.

One such story of courage emerged a year following the attacks about one of these heroes who bravely saved minimally dozens, Welles Crowther.

Crowther, 24, was an equities trader from Nyack, NY working on the 104th floor of the South Tower. The South Tower, located at 2 World Trade, was dwarfed by its sibling North Tower, which featured the 360-foot antenna.

Crowther was working at his job at Sandler O’Neill and Partners, when the second plane, United Airlines Flight 175 hit his tower at 9:03 a.m. that day. Though hit later, the South Tower, which endured the explosion of the plane, was the first to collapse only 56 minutes following the impact at 9:59 a.m. The North Tower followed at 10:28 a.m., after it smoldered and burned for 102 minutes.

In Crowther’s building, the plane impacted between the 77th and 85th floors.

At 9:12 a.m. Welles Crowther picked up the phone to calmly leave a message for his mother.

His family was uncertain about Crowther’s final moments but realized their son would not be coming home in the aftermath of the attacks. As they both watched the South Tower collapse, his parents immediately knew he had perished.

His mother described it as a feeling she had that she could not explain; and said it was a “mother’s heart knowing.”

His father, who knelt down in prayer after watching the collapse of the tower said, “Dear God, take me now. Leave him here. Take me now.” 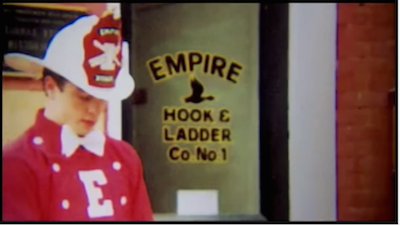 When rescuers located his body though on March 19, 2002, he was found resting with other firefighters in the South Tower Lobby. This made sense, as Crowther was a volunteer firefighter like his dad with the Empire Hook and Ladder Company; and it was surmised that he helped usher people to safety, though little was known from there at that time.

“The Man in the Red Bandana”

One of Welles Crowther’s trademarks was a red bandana that he was known to carry around. This was a trait he picked up from his father, who as a young boy, Crowther noted his father wrapped a comb within a red bandana in his back pocket, while keeping a white handkerchief in his front shirt pocket for show. At age six, Crowther received a bandana as a gift from his dad, along with the white hanky. He was seen carrying his red bandana along wherever he went, even under his sports uniforms and under his lacrosse helmet at Boston College.

Crowther hoped to return to a life of serving others, although he had a thriving business career and potentially hoped to become a member of the New York Fire Department (NYFD) or even the CIA or FBI. He was not a fan of sitting behind a computer, though he believed he should work in the business world.

It was not until Judy Wein’s account in The New York Times in May 2002, that Crowther’s parents would learn how their son applied his joy in helping others, along with his skills as a firefighter and incident command that day.

Wein was one floor beneath Crowther in Aon and suffered a punctured lung from three cracked ribs, and her broken right arm. In spite of her injuries, she helped to move a piece of fallen stone and to free other colleagues.

But soon, someone Wein had never met before, she told the Times in this article, arrived, his nose and mouth protected with a “red handkerchief,” as he sought out a fire extinguisher. Wein said that he instructed all of them, “Everyone who can stand, stand now. If you can help others do so.” 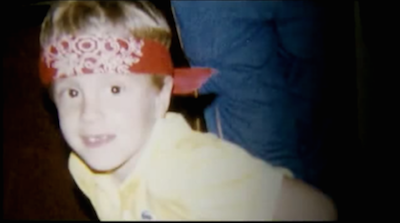 Welles Crowther sporting a red bandana as a child. You Tube screenshot fair use image.

Wein no longer speaks publicly, but her husband Gerry Sussman does, and after she was operated on at the hospital on Sept. 11, she recounted to him that she saw a young man extinguishing fires, and helping those who were injured. Wein then saw the young man return back to the sky lobby.

Another person separate from Wein was Ling Young. She told the times that she had seen this young man, who called out to her and said, “This way to the stairs.” After ushering Young to safety, she noted that the man, who had the same red bandana that Judy Wein remarked about, had a woman hanging onto his back. After leaving them at a location that was safer and clearer, he departed back upstairs to help more victims.

The man met the victims on the 78th floor, on the sky lobby at the 78th floor to Stairway A, which was the only stairway accessible from that floor. Those who could walk themselves followed him to floor 61, where firefighters were waiting to take people the rest of the way to the 40th floor, where elevators were still operating.

Allison Crowther mailed photos to Wein and Young. Each confirmed Welles Crowther was the man who saved them.

“I looked at it very carefully, I said, ‘yes that was him,’ there was no question in my mind,” said Young.

Young keeps the photo of Crowther on her living room end table.

His mother told ESPN it was a “beautiful thing,” to discover this about Welles, as well as for the victims, to be able to know who the mysterious stranger was who saved them that day.

“We took great peace in knowing that Welles didn’t suffer and that, up until the end, he was being very courageous, doing what he wanted to do,” she said. “So he must have felt very fulfilled that day, knowing he was helping others.”

His father, Jefferson Crowther, added, “He didn’t live long enough to be head of a corporation or do good works or endow a museum. But what he did on September 11, that’s his legacy.”

Click below to view an ESPN documentary about Welles Crowther.

Welles Remy Crowther has been honored and remembered a hero that day, like so many others, for his sacrifice. In 2006, he received a posthumous honor as a New York City Firefighter.

There is the annual “Welles Remy Crowther Red Bandana Run,” a 5K run held at his alma mater, Boston College. Boston College, at the 2011 game versus Central Florida, players wore red bandana stickers, with Crowther’s siblings, Paige Crowther and Honor Fagan, taken out to the field as Boston College as he was remembered the day before the anniversary.

Crowther’s former teammate Tyler Jewell, in tradition during the 2006 Winter Olympics sported a red bandana during the games as part of the U.S. snowboarding team. 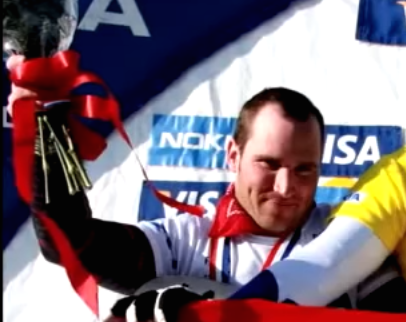 A documentary film and book has been released about Crowthers. Tom Rinaldi authored, “The Red Bandanna.” And a documentary, Man in the Red Bandana, is narrated by Gwyneth Paltrow, with music by Lyle Lovett.

“He went up so, so other could come down,” is the tagline for the film.

In May 2014, President Barack Obama during the museum dedication, where one of Crowther’s bandanas is now on display, said, “They didn’t know his name. They didn’t know where he came from. But they knew their lives had been saved by the man in the red bandana. He called for fire extinguishers to fight back the flames. He tended to the wounded. He led those survivors down stairs to safety and carried a woman on his shoulder down 17 flights. Then he went back up. Back up all those flights. Then back down again, bringing more wounded to safety. Until that moment when the tower fell.”