It’s October 5, 2001 and I’m resting in a New Jersey hospital bed with my newborn child. While I lavished in the beauty of welcoming my sweet child into the world, and watched educational programs to pass the time on the hospital’s channels about newborn babies, when I switched to network television, it was a different scene.

As I caressed my tiny babe’s head while my child rested in my lap, I watched reports from ABC 7 that reflected a sheer nightmare. The smoldering mass where the World Trade Center had collapsed was referred to as the “pile” and Ground Zero. The prospects now seemed grim at finding survivors at the site of the catastrophic and brutal attack on our country in New York, at the Pentagon and also at a lonely crash site where patriots saved the nation from further disaster and heartache as they scuttled the plane in Shanksville PA to prevent the hijackers from crashing into another major location as they heard was planned while they were in the air.

The last month leading up to my child’s birth had been surreal and I was grateful that I hadn’t been in early labor as I believed I was on Sept. 7. That would have landed me in the hospital in coordination with efforts to bring injured survivors to trauma locations in New Jersey.

Instead, that morning, September 11, 2001, a day much like today with blue skies, though even hotter and clearer, I sat on the recliner to hoping to watch Regis and Kelly. I had just emailed my dear friend who worked at Lehman Brothers at 3 World Financial Center in complex by the towers. I had emailed her to wish her a good day in our correspondences. Little did I realize she was not reading my response but fleeing for her life that morning. She and others, though they were assured by security all was OK were departing in elevators, were trying to convince another co-worker not to return to the office. One of her co-workers died. She ended up telling me later those on the ground were certain the city was being bombed and she headed for the East River, planning with the others to jump in, feeling it was one of the safest locations. Like Stanley Praimnath who InsideScene.com featured in a previous story, along with Brian Clark who saved him from the towers. Like Praimnath, who was missing his shirt after United Airlines Flight 175 cut his office in half with its wing, and unsure where it disappeared to, my friend lost her shoes somewhere in her escape and never knew where they went. As she walked uptown, crying and barefoot, she remembered a man on the street telling her, “Don’t cry sister.”

It is because of 9/11 my friend ended up in midtown and later laid off because of the net income loss. Eventually, Lehman Brothers folded altogether in one of the largest Chapter 11 cases the country has witnessed.

After I emailed my friend and then called the telephone company to pay my phone bill, I was greeted strangely by the representative. I later wondered if she had heard at that point, as she was very sullen on the other line. My attempt to watch Regis and Kelly was thwarted with the television not working. I thought it might be an issue with that channel, but as I surfed others, I also received no reception and only “snow.” Channel 2 was the only one able to broadcast and I watched both towers aflame. It was all unbelievable and seemed like a horrible movie. While initially thinking “people had to escape,” the grim reality set in as the towers fell, and one wondered how many could have perished that morning.

I also thought of my job, in Boonton NJ. We had a beautiful view of the towers and could see them every morning. Some days they were shrouded with clouds. At night, they twinkled in the darkness. But on many days, they were in their sparkling majesty, with the sunbeams shining down on them evident from 30 miles away. That day, my co-workers reported to me that all they saw was smoke billowing over the horizon, and while I was on the phone with the lady covering my maternity leave, one of our VP’s stepped out of his office and told of the news of the crash in Shanksville.

I was born in New York City and the towers were in my life my entire life. I visited them as a child and have fond memories of them being my beacons as I arrived in the city for work right after college. The windows emanated starlight from the building every night and also looked so radiant. I always wondered as the bus rounded up the hill from the tunnel, who might still be in that tower close to 7 at night as I was making my way home. They truly reminded me that the “city never sleeps.”

There were several stories I heard of that day of “almosts.” Like celebrity chef Michael Lomonaco, who worked at the Windows on the World and by the grace of God had an eye appointment to have his glasses repaired. He was spared by being downstairs at LensCrafters and ended up being ushered away as the second plane hit. One of the 79 co-workers that he referred to in this article, was a friend of a friend from Sparta who died while on duty that morning, leaving behind a family, including children.

Another friend and co-worker, also pregnant, feared for her husband’s safety, as he was headed to a meeting that morning in the Towers, but missed his train.

Hearing the stories of hope, blended with the sad tales of people’s final moments, including some that are still being discovered 15 years later, is so hard to bear. So many innocent lives were lost in an instant, and so many lives changed forever. Not to mention many people who have since developed illnesses, including cancers, because they helped that following the aftermath (someone I know who is a firefighter who helped ended up with kidney cancer). Even those who didn’t help were subject to illness and were victimized, like the woman known as the “Dust Lady,” an elegantly attired lady named Marcy Borders who ended up with a full coat of white dust from head to toe. She also died from stomach cancer and was a New Jersey resident from Bayonne. 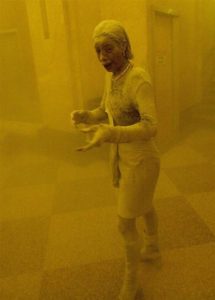 I need to give a hat tip to Matt Rooney of SaveJersey.com for inspiring this post. Rooney had written that on Sept. 11, 2001 most high school freshmen weren’t even born yet. “They’ll be voting in a few years,” he wrote about the tragedy, “teach them.” He especially asked that we remember the victims and teach New Jersey’s children, not only about all, but all who were killed from New Jersey, which tallies to 746. One of them was Todd Beamer, who stormed the cockpit of United Airlines Flight 93 and was a resident of Cranbury, NJ. I related deeply to his wife Lisa, who was pregnant at the time that I was, with her daughter born on Jan. 9, 2002, and like my child, is now in high school. Her dad’s wonderful legacy was one of his favorite expressions, “Let’s Roll!” as they fought the terrorists. These were Todd Beamer’s final words to Lisa Jefferson, an operator that he ended up speaking to from the air on one of the plane’s phones. He asked her to relay to his family how much he loved them. The line was dropped and Jefferson heard his expression. The voice recorder in the cockpit captured the struggle and the hijacker Ziad Samir Jarrah yelling repeatedly, “Give it to me,” as the passengers took control. It was destined for the White House, or potentially the Capitol Building. 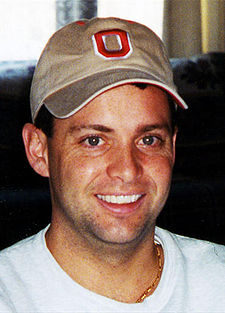 As Matt Rooney has aptly noted these people cannot be forgotten, no matter their role on Sept. 11, whether they were a victim, or someone who helped someone else.

As a reporter, I’ve had the honor and bittersweet task to report on numerous 9/11 events. I’ve also interviewed those who were there, or who lost loved ones. It is always emotional for me to write about it, though I know as a reporter and someone who has written historical books the importance of retelling the story with accuracy.

As a parent, I also believed this as I looked at my amazing child those days as I watched the heartbreaking news reports. I also felt this in my heart as my second equally amazing child, my daughter, was born.

Neither of these kids, nor any of their friends could understand the magnitude of the hurt of that day, unless we tell them. And having been a student myself I remember how historical stories were also whitewashed and continue to be in textbooks that we read, as well as our children. They are summarized and diluted, often editing out details and not fully revealing all. To me, it’s important not just as a writer but as a parent to teach readers and children of the present and future about this tragedy as best as possible.

My children have been with me to 9/11 ceremonies at both the college here, as well as in West Orange where one of the monuments now sit, and we attended together at the 10th anniversary. They’ve seen the distraught firefighters and prayed along with the rest of the group. They’ve heard speeches and listened to stories, even as children in the single digits. They’ve asked questions and we’ve had dialogues about 9/11.

The other day, my son was telling me about how he’d like to grow his hair out slightly to wear a headband when he’s playing sports with his team.

I reminded him of Welles Crowther, another hero who I’d just written about, known as “The Man in the Red Bandana,” and suggested to him he might like to wear a red bandana as he plays, which many athletes have done to honor Crowther’s memory.

We must all never forget and to quote Matt Rooney…”Teach them. Honor the lost to help the living.”

Remember 9/11 and teach our children, grandchildren and great-grandchildren about it, as living witnesses to a tragedy that should always be remembered, and victims of it and their stories of courage, never forgotten.