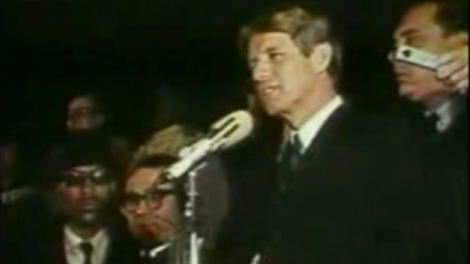 In recent times, particular groups like Black Lives Matter, have chosen to segregate themselves in a world where there is integration for all.

And in 1968, Senator Robert “Bobby” Kennedy pointed out the obvious fact – that the majority of people of all races loved one another and wanted to live together peaceably.

Kennedy was a Democrat but today’s Democratic leaders pale in comparison to Bobby and his brother John, our beloved president who was assassinated in 1963. That’s because today’s Democratic Party promotes the same message of division as its “establishment” Democrats did in the 1960s – not unity – hate – not love.

And the mainstream media, which for the most part shows that it caters to today’s Democratic Party, promotes the hate and suppresses the unity amongst Americans too.

In Kennedy’s time, the Democratic Party was splintering, with old-schoolers like Lyndon B. Johnson sitting in the corner pouting. That’s because Johnson’s policies supported division, while both Kennedy brothers were committed to civil rights. Kennedy also had plans to bring home the troops from Vietnam. Johnson held a disdain for the Kennedy brothers and JFK offered him the vice-presidency as an olive branch to gain support from the Southern Democrats, who wished to continue their tradition of racism and segregation.

“We can do better,” Kennedy told fellow Americans as he campaigned, believing that “the national soul of the United States” was in trouble.

“We confront our fellow citizens across impossible barriers of hostility and mistrust,” Kennedy said as he campaigned for presidency in 1968.

Robert F. Kennedy had hoped to end things that are rampant today and have become signatures of our times under the Obama administration – bigotry, destitution, hatred and bloodshed.

His assassination was the third of peaceful men who only promoted harmony amongst all citizens. First, it was his brother John. And next it was Dr. Martin Luther King. These three were sacrificed because they challenged the narrative of hate among citizens.

Lee Harvey Oswald assassinated John F. Kennedy on Nov. 22, 1963. Oswald, a Marine, lied to immigration officials as he traveled to the U.K., stating he was headed for Switzerland, but instead made his way to Russia. He was a communist sympathizer seeking Russian citizenship and attempted to murder U.S. Major General Edwin Walker before Kennedy, who also held a disdain for communism. Jack Ruby later murdered Oswald as he was escorted from the Dallas Police Station. As he shot Oswald, Ruby yelled, “You killed the president, you rat!” Ruby said his hope was to save “Mrs. Kennedy the discomfiture of coming back to trial.”

Kennedy was instrumental in helping the Freedom Riders of his day, led by Dr. Martin Luther King, Jr., providing the peaceful group with the National Guard and U.S. Marshals in Alabama. Many credit Kennedy with having prevented an assassination attempt against Dr. King.

On April 4, 1968 King was murdered in Memphis while Kennedy campaigned for presidency in Indiana. His murderer was James Earl Ray, a repeat felon and major supporter of George Wallace. Wallace, an Alabama Democrat and the state’s Governor, ran under the American Independent Party ticket. Previously, only days before JFK had been assassinated, Wallace had said he planned to run against him.

The night that King was slain, Kennedy stood in the back of a flatbed truck within an Indianapolis neighborhood that was primarily the home of black Americans. His speech was one of comfort and unity. To the black audience, Kennedy brought solace, while in 60 other major cities there was uprising and violence, which King would have naturally condemned. Kennedy related how he could understand their hurt, with his own brother having been murdered by a white individual. 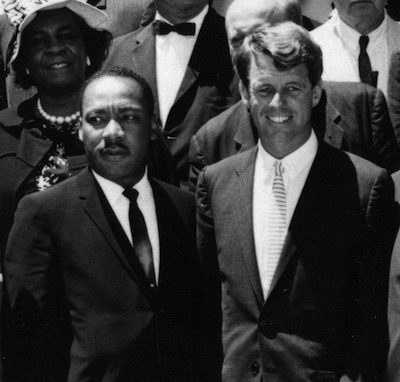 “For those of you who are black and are tempted to…” he began…”be filled with hatred and mistrust of the injustice of such an act against all white people, I would only say that I can also feel in my own heart the same kind of feeling.” He continued” I had a member of my family killed, but he was killed by a white man. But we have to make an effort in the United States. We have to make an effort to understand, to get beyond these rather difficult times.”

In his speech (click here for it in its entirety) Kennedy’s words healed and iterated how the majority of people felt then…and still feel today.

dIt was the first time he had ever spoken publicly about his brother’s death. Kennedy also refused his press secretary’s and speechwriter’s drafts. Authorities also warned him that day he may also not be protected if the crowd rioted, and Kennedy spoke anyway.

Click here for his speech in its entirety. Click below for the video of this historical speech.

On June 6, 1968, Sirhan Bishara Sirhan, a Palestinian shot Kennedy, an event captured on national television as he was in Los Angeles after having won California’s primary. Sirhan held a disdain for the Kennedy support of Israel.

His last words were a weak, “Don’t lift me,” as he slipped into unconsciousness after being placed on a stretcher, but just prior to that, as a busboy Juan Romero who he had just shaken hands with and who placed a rosary in Kennedy’s hands after he was shot, Kennedy asked him, “Is everybody OK.”

Let the love of people and of country that these three men, Robert F. Kennedy, John F. Kennedy and Dr. Martin Luther King, Jr. be remembered in such divisive times…may this legacy of a United (both literally and figuratively) States of America always be held the highest.

Let’s always dedicate our lives to love and justice between fellow human beings as Kennedy remembers King did in his speech.