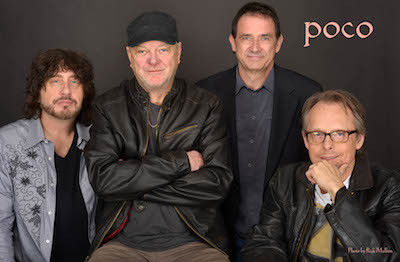 Poco began when Richie Furay, Jim Messina and Rusty Young met during the Buffalo Springfield’s Last Time Around sessions in 1968. Rusty was called to play steel guitar on Richie Furay’s song Kind Woman and after the session was over the three talked about starting a band. The addition of Randy Meisner and George Grantham completed the line-up and launched the band that would inspire a generation of musicians and would include as some of the genre’s most distinguished players.

With the release of their first album Pickin Up The Pieces, the only debut album to ever receive a perfect rating from Rolling Stone, Poco was off and running. with 24 original albums and 26 Best Of and anthology collections, Poco is one of the most prolific bands in rock history. In the last decade the band has stayed true to form, releasing Running Horse in 2002, the all acoustic collection The Wildwood Sessions in 2003, Bareback at Big Sky in 2005 and Keeping The Legend Alive, the critically acclaimed 40th Anniversary Live DVD. Loved by fans and critics alike, they are among the best of their career.

Still playing to crowds of Poconuts, still winning over new fans, still reaching for new challenges, the band continues to maintain a busy tour schedule, beings on stage at venues across the country. Longtime Poco bassist Jack Sundered, renown Muscle Shoals Section drummer George Lawrence, and the newest addition keyboard wizard Michael Webb, join Rusty Young, in building on the musical tradition that has been a hallmark of Poco for over 4 decades.

“Poco has a history unmatched by any band and we feel a responsibility to keep audiences captivated with each and every concert. I’m excited about Poco’s future. It’s been a long ride and it just keeps getting better!” – Rusty Young.