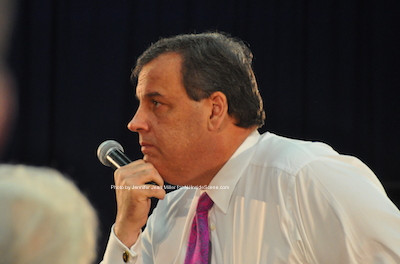 SPARTA, NJ – New Jersey Governor Chris Christie visited Sussex County for one of his town hall meetings at the Sussex County Technical School on Thursday, May 14 to a packed crowd of about 450 strong.

The attendees began lining up before 8:30 a.m. and the doors opened at 9 a.m. with the event starting shortly after 10 a.m.

Christie has been to Sussex County previously for town hall events in the past including one in Hopatcong and then one in Vernon. The town hall was his number 137. He reiterated how much he enjoys the county, as does his family.

“My kids can’t wait to come up for the fair,” he said, noting that Senator Steve Oroho (R-24) gives him a tour of the event annually.

Christie’s town hall followed the formula that he has at his other town halls where he speaks briefly and then offers a time for questions from the audience.

Christie offered that he enjoys the town hall meetings because “I get to know what you’re thinking about.” 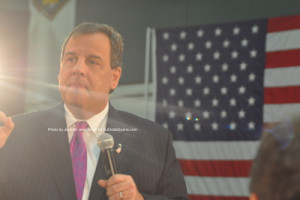 Governor Chris Christie as he speaks during his introduction. Photo by Jennifer Jean Miller.

Christie also shared with the audience about the budget that it has been six budgets since a tax increase and that overall the state spends 25 percent less in discretionary funds than it had eight years ago.

“I don’t have a magic money tree,” Christie said. “It’s your money and we need to spend less.”

He also said there were “deadly sins of the past we have to fix,” regarding the prior administration.

On the topic of health insurance in New Jersey, he said that the state picks up insurance for retired teachers to the tune of $1 billion annually and in terms of their pensions, $39,000 a year. In other states, the average pension runs $26,000 annually for teachers. He also said that police in the state are garnering an average yearly salary of $92,000, also highest in the nation. With New Jersey at the top of the scale in pay, they are also at the top of the scale in payouts for pensions.

He added that after the known tension between he and the teachers’ unions, it appeared in February a framework had finally been agreed upon, but then the unions backed out and they no longer wished to negotiate.

Christie said in order to fund the pension, a topic that one of the audience members Mark Worobetz debated him on during the Q&A, Christie said taxes would need to be raised between seven and 10 percent or the income tax, 29 percent. He also said New Jersey attempted to make cuts in particular areas, such as reducing Medicaid, but it was something the Federal Government would not permit. He said he could lower costs or increase taxes and he did not want to increase taxes.

“We hear the democrats in the legislature say ‘OK, I’ll make the payment,’” Christie said, and then asked, “Where’s the money coming from?”

Christie said he does not want to cut pensions and does not want the pensions to go bankrupt at the same time. He said if it goes bankrupt, no one will get paid and said it could turn out similar to what happened in Detroit.

“This is coming to a theater near you,” Christie said.

He said that he was not going to take the easy way out.

He said over 10,000 millionaires have left New Jersey.

“Where are we going to get the next $25 billion?” he asked. “You don’t get it from taxing rich people. They’re going to tax you.”

He said when questions like that are not answered for constituents by those suggesting that they will make payments, they end up taking it from the working citizens of the state.

After wrapping up his introduction, Christie explained the four rules of his public portion of the town halls. One reporter called him out that he did not apply his four rules while on tour in New Hampshire for speaking engagements and he quipped, “’Cause New Hampshire is not New Jersey.”

One of his rules is for audience members to raise hands to be called on jokingly explaining that he can easily tune out those calling out to him after being a parent of four children. One of his other rules is for those called on to state their name and where they are from. Not giving a speech at the microphone was another one of his rules. And lastly, he asked to make any disagreements respectful. 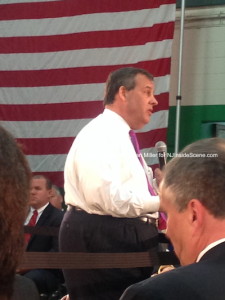 Governor Chris Christie during the question and answer portion of the town hall. Photo by Jennifer Jean Miller.

Christie said many have a philosophy that “today is my day” when some take the mic and he cautioned, “We are all from New Jersey so if you take the Governor of New Jersey out for a walk, you give it and you’re getting it right back.

Alexandra Miller from Sparta was one person who asked a question about Christie’s stance on giving psychologists the ability to write prescriptions. Her concern was that there is a shortage in the area of those in her profession. Christie asked as he did in a few cases, for Miller to follow up with her information with a member of his staff. He said it was a topic he had not considered and suggested it could potentially be done carefully, with a narrow ability. 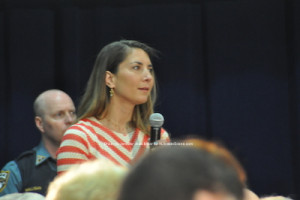 Francine Brink was another one who had concerns about the New Jersey Education Members and those with PERS status. In light of the issues with the teachers’ unions, Christie said he hoped they could reach an agreement and that if they could, he would look into special cases.

Bill Gettler was chosen to take the microphone and asked Christie if he would address what he saw as corruption in Wantage Township government. He had spoken about this in the Vernon Town Hall as well as in letters. The governor acknowledged that he had received the letters and remembered his previous request and said he forwarded to law enforcement in the attorney general’s office for their review and trusted that if they were to find issue with his claims they would address them. He also noted that if a person was to make accusations and take away a person’s liberties by doing so that would prove beyond a reasonable doubt of what they were accused that every other citizen should have access to the same constitutional rights in case the day came when someone came knocking on their door with similar accusations.

The topic of illegal immigration came up as well and asking Christie what he would do if he were to run for president and be elected. Also, Christie was asked his view on instate tuition for children of illegal citizens.

Christie said with regard to illegal citizens, because the question was asked about creating a wall across the entire border, he felt that was not necessary except in certain locations. He said the United States is a place that welcomes immigration and having a wall up across the full borders would prevent entry by those who would like to enter legitimately.

“We need to control who comes in and who does not now and need to fix it in a way that is smart,” Christie said.

He also said that employers should use the E-Verify system to check that employees are documented for work in the United States.

Regarding the tuition, he said it was a challenging process but determined that children of those here illegally are most of the time citizens born in the United States. Those children are already being educated as other students are as provided under the law. Christie said he did not want things to be more difficult for these children and wanted to make them productive.

Another topic that came up for Christie was in the environmental sector and regarding his ban on fracking waste ban bill. He described it as one of the bills put through for the purpose of grandstanding, which he said he has been asked to ban certain things that New Jersey does not do and banned the bill because it was unconstitutional. 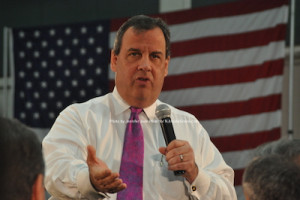 One question posed was from a mother whose daughter was suffering a mental illness and began abusing drugs. She asked what Christie’s plans were to tackle this issue. He said this was a cause near to his heart because of a friend of his who had been a brilliant lawyer who became addicted to painkillers and vodka following a back injury. In turn, his friend lost everything, including his marriage. Christie said he waited for the day of the dreaded phone call that he eventually received that his friend passed way and his body was found in a hotel. There were many wiping tears away in the gymnasium where the town hall took place as Christie told the story.

“Addiction is an illness,” Christie said and that he has founded a task force to address the need. “Pro-life means being pro-life for a whole life and your daughter is an individual gift from God. Every life we save will be helpful.”

Christie concluded his town hall by stating that it has been a privilege to serve in two terms as New Jersey’s Governor, whether he chooses to continue until 2018 or if he may pursue another job in 2016 that continues to be rumored that he is aiming for. While at times he describes his role as governor isolating, as the person who is relegated to taking side doors into buildings for reasons of security, he tells the New Jersey State Troopers who watch over him that he will ascend the front steps each time he enters into the statehouse. As the boy who came from a working class background, with the first family picture that he said was taken in June of 1962 at his father’s graduation from Rutgers –- the first in the family to graduate college — and when his mother was pregnant with their first child who would go on to become the state’s governor, each time he asks himself how it has happened that the name Chris Christie is on the door of the Governor’s Office.