The Great Blue Heron from Lake Tranquility peeks his head out from a spot in his temporary home.

WANTAGE – For Kim Hart and her husband, Steve, they were unaware that a recent canoe excursion would become a rescue mission.

While canoeing on Lake Tranquility in Green Township on Friday, Sept. 27, Kim and Steve noticed something amiss with a Great Blue Heron they typically spot on their canoe rides.

“I usually see him, but we saw a bird that its beak was tucked behind its feathers,” she said.

Whereas the bird would typically squawk and flee, the heron did not move. Immediately, the couple knew something was wrong, and contacted the Antler-Ridge Wildlife Sanctuary in Warren County for help. Antler Ridge referred Kim, who made the call, to the Avian Wildlife Center in Wantage. 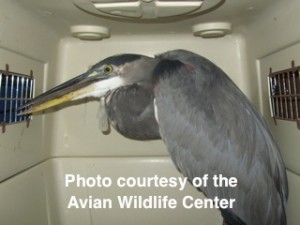 The Great Blue Heron being transported to the vet to remove the fishing lure from his beak, tongue and throat.

Once Katie arrived, Kim joined her in an attempt to reach the heron, which was done with difficulty since the bird stood behind a fenced-in area. The first approach to near the heron came from the lake’s clubhouse, to no avail. The second was from the shoreline by rowboat, from where the pair became successful in reaching him. With Katie’s training, she was able to remove the bird, while covering him with a towel.

Upon observation, she was able to see the bird had a fishing line dangling from his mouth that was wrapped around his wing. The line turned out to be anchored inside of his mouth, via a fishing lure with four hooks The hooks gripped onto his beak, tongue and throat. 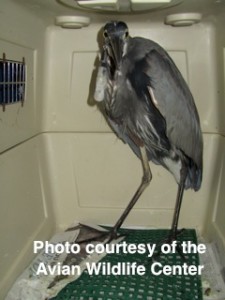 The Great Blue Heron from Lake Tranquility after arriving to the Avian Wildlife Center.

The fishing line, which was removed from his wing, cut so deeply into the bird’s tender flesh that it reached his bones. Anesthesia was required to sedate the Great Blue Heron and remove the lure and hooks from his beak, throat and tongue, which were all severely wounded. He required a course of antibiotics to treat an infection that developed, and may require another round, to completely eradicate the infection from the injuries.

Kim felt so strongly about this topic, she sent an email to residents in her lake community, after being told by Giselle Smisko, wildlife rehabilitator at the Avian Wildlife Center, that ducks and geese are often found with severed legs from razor-like fishing line.

“It’s not just animals though,” she said, noting how often on their canoe rides, she has nearly been hit herself, by fishing lines and hooks left dangling from trees.

In her email she asked her neighbors to take care and dispose of lures and fishing line properly.

The heron at the vet, for removal of the lure.

“This is not only to protect the wildlife, but humans as well,” she reiterated. “There are many times I’ve canoed under a tree, to almost get a fishing hook in the eye. I understand there are times that lures get stuck and lost, but please make every effort to find the lure, or if it gets stuck in a tree, make sure to cut it down and remove it.”

Giselle’s background as a naturalist with a biology degree, she said, did not completely prepare her for the vocation of wildlife rehabilitator, for which she and her husband volunteer their time. Many of their skills have been acquired from hands-on experiences.

“I can, unfortunately, give you countless tales of birds injured by fishing line,” Giselle recounted to NJ Inside Scene, as we proceeded with her to meet the Lake Tranquility Great Blue Heron.

It was breakfast time, and he was delivered “room service,” to his area, with a special meal of fish to start off his morning.

The Blue Heron has been recuperating in a contained area, which will permit him to rest, regain his strength and heal, after his injuries. Once he progresses, the Great Blue Heron will be upgraded to a flight cage to regain his wing strength before his release.

Lake Tranquility’s Great Blue Heron happily dined on his fish dish, in spite of the company nearby his quarters. Unlike the bird in the photos within the cage, his demeanor no longer looks pained and hunched over – he is now freed from the constraining and detrimental fishing line. The piercing lure is also now fully removed. The Great Blue Heron’s healthy appetite is also an excellent sign. His appearance is evident of a creature that is on the up and up, who will eventually be able to return to his home, where he can, in turn, fly up and away to where he is most familiar.

This is the goal for all the birds at the Avian Wildlife Center.

“Our goal is to get all of the birds out of here,” Giselle said.

With recoveries like the Great Blue Heron seems to be experiencing, she said, “Some miracles happen, and we rejoice over those.”

NJ Inside Scene received a first-hand look at the immense fishing lure that had been removed from the Great Blue Heron’s beak and mouth and discussed how brutal the pain must have been for this graceful wetland-gravitating bird.

The Plight of Other Birds in Recovery and Residency

Though the Great Blue Heron’s injury was most likely caused by an act of negligence, Giselle and John showed NJ Inside Scene evidence of intentional acts of harm and cruelty that humans can cause to wildlife.

A pointy dart was something the couple showed, which had been removed from the skull of a goose. It took a week to catch the goose, and then from there, extract the dart, which, scraped the back of the bird’s skull, and created no further harm from there.

Both the lure from the Great Blue Heron and the dart are on the video that accompanies this story.

“It was a totally illegal act,” Giselle said of the action against the goose.

Another act of brutality against a guest of the Avian Wildlife Center was done against a hawk that is now recovering there. Many birds that stay for a stint at the center are harmed when they collide with cars. It was suspected that was the outcome for this hawk that had an injured wing and leg. However, an x-ray revealed instead lead pellets – one in the wing and one in the leg.

The pellet in the hawk’s wing has been removed, yet the one in the leg has not been retrievable at this stage. The bird has been tested for lead poisoning since the incident.

“The tragedy of this,” Giselle said, “is that those who illegally hurt wildlife never get caught.”

Giselle and John said they need people, such as hunters and those fishing, to report acts of cruelty to animals. Though often given a bad rap, most that hunt also care about wildlife, she said, and hopes they can keep their eyes and ears open for these cases, and report them to authorities.

In a case reported North Carolina this past spring, two Great Blue Herons were shot, and later euthanized near an area pond. A third heron was shot the year prior.  The article from the Charlotte Observer said, although not endangered species, Great Blue Herons are protected under federal law with the Migratory Bird Convention Act, and those who shoot them are subject to a fine of $250,000 if caught.

In a California case in 2008, a Great Blue Heron was shot and lived, and the perpetrator remained at large. The maximum penalty in California is six months jail time and a fine of $1,000.

In two cases, there was restitution for harm done to Great Blue Herons.

In the Adirondack area of New York, two men stoned a Great Blue Heron tauntingly, and were caught. The bird was so badly wounded it was sadly euthanized. The two men accused of killing the bird denied it, though they were identified by witnesses, and were charged. The maximum penalty there in New York created an outcry for steeper penalties, with $250 and/or 15 days of incarceration for each violation, and additional civil penalties of $300 per count. A follow-up news report in 2012, stated one of the men was fined $500, and the other sentenced to 60 days in jail, with four years in state prison tacked on for parole violations.

In Arizona, this penalty was much less, when in 2011, a man was fined $450 for bludgeoning a Great Blue Heron to death with a golf club, for eating fish in a course’s pond. Sadly, this assailant, police reported, was not remorseful, and sneered to them that he should not have committed the act in the presence of “bird lovers,” and did not regret harming the heron.

“Great Blue Herons can live up to 24 years,” Kim Hart wrote. “I can only hope that our Lake Tranquility Blue Heron will be OK, so we can have many more years of its presence on this lake.”

How can individuals help to further protect New Jersey’s wildlife?

Kim Hart shared some tips with her neighbors as well, that are below, about conduct around the lake community while fishing:

Editor’s Note: Thank you to Kim Hart and Giselle and John Smisko of the Avian Wildlife Center, for their assistance with this article.