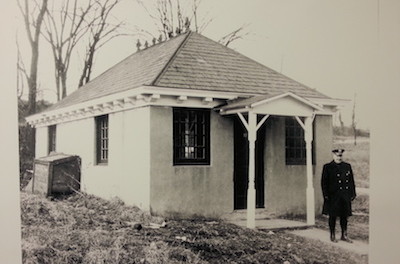 FRANKLIN BOROUGH, NJ – In 1915, Alexander Graham Bell made the first call across the United States to San Francisco. In tandem, Thomas Edison invented a special recorder for phone calls known as the “telescribe.” Baseball hero Babe Ruth walked to the pitching mound for the first time for the Boston Red Sox during this year. President Woodrow Wilson was also in office then, and the first commander-in-chief to attend a World Series game. The First World War was underway, and the sinking of the Lusitania developed further strife between the United States and Germany, with Wilson attempting negotiations along the way.

This was a golden year for Hollywood, with W.C. Fields first appearing onscreen and Charles Chaplin starring in his legendary film The Tramp, which set people back about 15 cents for a movie ticket. “Keep the Home Fires Burning,” was one of the year’s hit songs recorded on Edison Records that year.

A gallon of gas cost 15 cents, to send a letter cost about two cents, a loaf of bread about seven, and a quart of milk a whopping nine cents. The take home pay for the average citizen two years after the income tax was established in 1913 was about $687 a year.

It was at this same time that a monumental occasion happened in Sussex County history, with the establishment of the Franklin Borough Police Department. 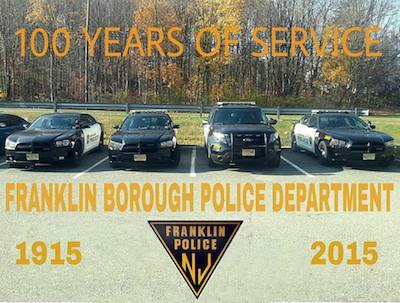 A tribute for the Franklin Police Department. Image courtesy of Rafael Burgos.

Franklin Borough was a thriving mining community, with miners from a range of different countries forging a diverse population in town. There were other monumental occasions in the borough then known as the “village of Franklin Furnace,” with its first hospital built in 1908. In 1913, the community separated itself from Hardyston Township and the Borough of Franklin was born.

With the new community, a school was created to help educate the children of the miners who foraged for the minerals and ore in the caverns of the borough, and the building opened its doors in 1915. Franklin’s school is still in existence today, having just celebrated its 100 years in existence as well.

On Oct. 1, 1915 the Franklin Borough Police Department came into being, with the hiring of its first mounted police officer and chief Herbert C. Irons. Franklin Borough’s Mayor at the time, Elwood Shuster, recruited the man who would become legendary in the area as a member of law enforcement.

On Oct. 5, 1915 meeting minutes from the Franklin Borough Council note that the Jail Committee “reported the employment of a police officer and have secured a horse for him.” 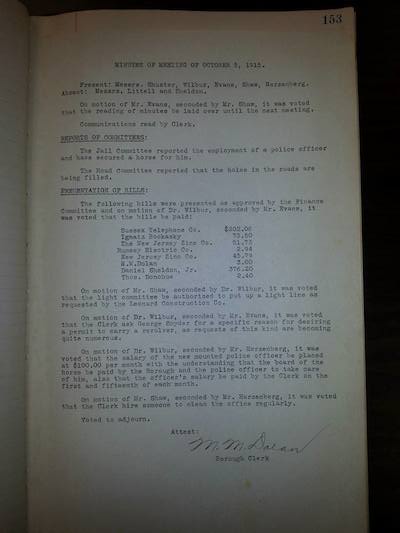 Meeting minutes from Oct. 5, 1915. Image courtesy of the Borough of Franklin.

One of the motions from that meeting voted that the salary of this new mounted police officer be set at $100 per month (far exceeding the average salary from that year). The officer would be paid twice monthly, on the first of each month and the 15th. The borough council also voted to pay for the boarding of the horse, with the officer appointed to care for the horse’s needs.

Watson Littell was one of the council members on the borough’s first council and considered one of the founding fathers of Franklin Borough. His great-granddaughter Alison Littell McHose is the current borough administrator.

“As the great-granddaughter of Watson Littell, one of the founding fathers of Franklin Borough, I am pleased to congratulate the Franklin Police on their hundredth anniversary,” said McHose. “We appreciate them for all the hard work and their dedication to the residents of the borough.”

Irons was an illustrious member of the community and employee for the Borough of Franklin. He retired from the police force in 1957 at the age of 67. Irons had previously served in the United States Army, and while in the military, the Panama Canal Police Force. Prior to his post in Franklin, he was a trooper with Troop A of the Pennsylvania State Police.

He was known for his fearlessness and persistence. One of his major cases was the 1921 Cat Swamp murder, with the chief coordinating the search for the suspects, later leading to the capture of six individuals. Two eventually served life sentences of about 30 years, two others spent the remainder of their life behind bars, and the final two met their fate in the electric chair for the crime.

For Irons, he was recognized for his coordination of the entire case, and bringing the murderers to justice, after one individual was kidnapped, the other murdered and the community terrorized.

“I also want to recognize the New Jersey Zinc Company for their role in hiring Chief Irons, who led the force and was the force for many years,” added McHose.

The Borough of Franklin enjoyed prosperity due to the guidance of its founders and with the New Jersey Zinc Company, then Sussex County’s biggest employer. During the Great Depression, residents of Franklin Borough remained steady, as the mine kept its workers on staff, with a four-day workweek.

Back in those days, according to Franklin Borough’s local history page when a resident was seeking police assistance, if the resident had access to a phone, they would dial 2201. Otherwise, they would need to report to the New Jersey Zinc Company and speak to the clerk in the company’s time office. From there, the clerk summoned the police via a switch that ignited lights throughout the borough, with the clerk flashing the lights for dire emergency situations.

The police department has grown since its days when Herbert Irons joined its ranks. Today, there are 11 officers on staff. Chief Eugene McInerney heads up the department. There is one lieutenant, two sergeants, two detectives and five other officers that are on the roster.

All emergency calls are now routed through the 911 system, or police can be contacted directly through the dispatch center in Sparta.

Fraternal Order of Police Lodge 57 President (the fraternal police organization for Franklin, Ogdensburg and Hamburg Boroughs) Nevin Mattessich, who is also a detective in Franklin Borough said, “As the Franklin Police Department celebrates its centennial, we honor all of the officers who have served the Borough. While policing has seen drastic changes in technology and strategy the essence of the job remains the same for Franklin Borough officers, to serve and protect the community, whatever it takes. All of our officers continue to go above and beyond to make sure our community is safe and take whatever means necessary to make the quality of life as good as it can be in the borough.”

Mattessich continued,” Under Chief Eugene McInerney’s direction specifically, the Franklin Police Department has and continues to make great strides in making Franklin safer and we have been able to continue to serve and protect Franklin residents despite the negative climate surrounding law enforcement today.”

“We look forward to serving the residents of the Borough of Franklin for another 100 years,” Mattessich concluded.

Editor’s Note: NJInsideScene.com congratulates the Franklin Borough Police Department on its centennial and thanks the department for its years of service to the community.