SPARTA, NJ – Members of the public had the chance to learn more about some of the Republican Candidates for Assembly at the Skylands Tea Party Debate held at the Sussex County Technical School Cafeteria on Tuesday, May 26. Marie Bilik, Gail Phoebus and Parker Space were present, with Nathan Orr not in attendance due to a scheduling conflict.

In spite of the warm temperatures in the cafeteria that night, the audience didn’t divert from staying tuned in to the debate.

Each candidate opened with background information. Bilik told the group she hails from Green Township, served as former mayor and works in Alexandria, Va as the National School Boards Association (NSBA) Chief Operating Officer. Since her residency has come into question several times throughout the campaign, she clarified that she has a furnished apartment there and comes home to Green Township to visit her five grandchildren. She stated she has both a New Jersey Driver’s License and maintains New Jersey residency. 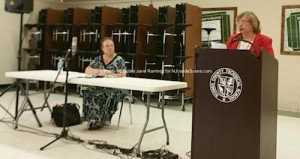 Space’s family has been entrenched in Sussex County for over 100 years. Space Farms Zoo & Museum has been a part of Sussex County since 1927. Space was the Mayor of Wantage in 2008 and 2009, has served on the fire department as its chief and before he became an assemblyman, served as a Sussex County Freeholder. 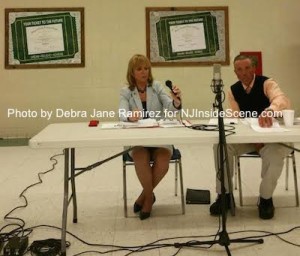 Phoebus has served on the Andover Township Committee, including having sat as the township’s mayor, and has lived in Sussex County for over 45 years. She and her family own Farmstead Golf & Country Club for over 40 years.

All three candidates agreed that government should have no part in business.

Phoebus pointed out that on her business property, the government has insisted on monitoring the water supply to the course and is constantly insisting that she upgrade the monitors even though they are in perfect working order. This, she said, is costing her thousands of dollars to upgrade systems that are working perfectly.

Bilik said her family owned a small deli and the government insisted she put in five sinks.

Space stated he spends a great part of his day doing paperwork, “where my Dad never did.”

Both Phoebus and Space attended the opening night of the Skylands Stadium and said they are excited it was owned by a private business.

“What should the government be involved in? “ was another question pitched to the candidates.

Phoebus answered in public safety only and the roads.

“Government should not be part of the business world. “I mean really can you think of anything that government is involved in that is working?”

They also agreed on the Second Amendment. Phoebus herself owns three handguns, shoots regularly and is a member of the National Rifle Association (NRA). Space’s father gave him a gift of lifetime membership to the NRA when he was younger, he said. Bilik remarked that her deceased husband was an active member of the NRA, as is her son. She however is not a member and doesn’t own guns. Bilik contributed that gun education should be taught very early on, so if small children come across guns in their home they understand what the bullets and guns can do. She feels this would prevent a lot of necessary tragedy.

When Bilik was asked about the Abbott district, she said that Jersey City and Hoboken need to been reevaluated, as they are Abbott Districts and the average rent in these cities is $3,000 plus dollars. Phoebus said that parents should have the right to send their children to any school or educate at home and be reimbursed for the same. All three of Space’s children attended the Sussex County Charter School of Technology early in their careers,  with his son Hunter and daughter Lindsey, having already graduated from Sussex County Technical School. Daughter Kelsey is a sophomore at Sussex County Technical School. Lindsey has recently completed her freshman year at Lock Haven University.

Space probed Bilik on several issues, including if she was an education lobbyist, which she denied. He also asked about her receipt of a pension from the State of New Jersey. Bilik maintained while the funds are managed by the state, her pension is not administered by the state.

The moderator asked all three candidate about Gay marriage. Both Phoebus and Space said they were against it.

Bilik offered on the topic, “You don’t have to like it or accept it or endorse it but you have to recognize it.”

Gail shared that her own daughter became pregnant at 20 and now has a four-year-old daughter. Phoebus said overall there should be a larger support system for woman on the topic of abortion, especially for those that are raped and become pregnant or become impregnated by incest.

The hottest topic of the evening was the Solar Project.

Both Space and Phoebus explained they contacted the FBI and State Prosecutors when they suspected foul play. They said out that nine members of the board on the Solar Project stood to financially benefit. Space held up a copy of the Evaluation Report for anyone to review after the meeting. 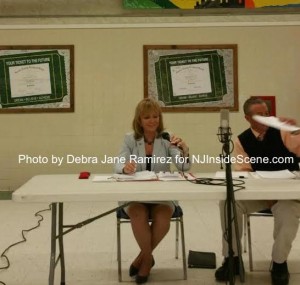 Finally when asked what your biggest contribution is to date each candidate answered as follows:

Space: ”I was a volunteer Fireman for over twenty years and I loved helping families.” He added that as a “rattlesnake handler” is needed in Trenton.

“Phoebus : “ I love helping people.” She told a story of how her neighbor’s donkeys and three 450-pound pigs escaped from their property and the animal control officer was beside herself. Phoebus and husband Bob of 41 years successfully corralled the animals.

Biliksaid of her most prized accomplishments was fighting the Federal Aviation Administration (FAA) and keeping Green Township Airport a dirt runway keeping the sky’s above clear from larger, noisier plans.

The crowd also asked questions via note cards that the three candidates answered, however Phoebus was the only candidate to take on the question as to why New Jersey has the second highest foreclosure rate in the nation, with hundreds of home right in Sussex County pending foreclosure, including many in Sparta.

Phoebus responded that New Jersey has the longest process in the nation, where other states foreclose in 90 days, since is a judicial state.