The excerpt of the letter referring to Nick Giordano that Paul Crowley sent to Franklin Borough Republican Voters. Image courtesy of Nick Giordano.

As many know, I am running for Franklin Mayor this Tuesday. I pride myself in running a clean and honest campaign, focusing on what and how we can do for a better Franklin. Recently, my opponent however decided, as he has in the past to get down and dirty. Let me address this without stooping to his level.

In a recent letter, claims of me being uneducated, caustic, working against people and giving excessive contracts out were made.

The truth is that I put myself through college WHILE working full time, like a lot of working people. I consider myself lucky to have been able to do that. So like most of the residents of Franklin, I may not be a doctor, the letter clearly shows that class isn’t what you take, it’s what you have.

Am I Caustic? You bet! I believe that we are there for the betterment of Franklin, not our friends. (See the past administrator for that) That means I will do what is right, because there is never a bad time to do what is right.

Truth is we combined the Roads and Water dept positions for a new role; we paid the man what he made the year before (inclusive overtime) saving over $100,000 for Franklin. This is an example where petty personality conflicts were going to cost Franklin $100,000 in salary and benefits for another supervisor because Paul Crowley did not like the guy who has the job now. The council saw the savings and we (the taxpayer) prevailed. 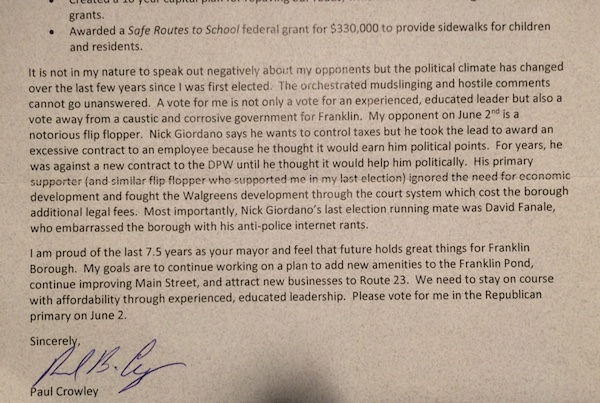 The excerpt of the letter referring to Nick Giordano that Paul Crowley sent to Franklin Borough Republican Voters. Image courtesy of Nick Giordano.

Now in the letter so graciously tendered to our residents Paul Crowley makes claims of his continued effort to improve Main Street.

“Much of the discussion focused on Main Street, and whether plans to revitalize it would succeed.

On that, Crowley and Giordano offered differing perspectives.

Crowley said that Main Street has no prospect for competing with Route 23.

“That’s just the way it is. I would not really recommend a small businessman open on Main Street unless they had a niche enterprise,” Crowley said.

“There are a lot of things that could be done on Main Street,” he said.”

His other claims of bringing business to Franklin fail to point out that that we have lost 3 businesses to every one opening. To include: Staples, Arby’s, Super Walmart, Sussex Bank and now Easter Seals to name just a few

But WAIT! There is more, he claims that I was Dave Fanale’s running mate. Yup, I was re-elected when he was elected, but the truth is on that he was “hand-picked “ to run against me by Paul Crowley; My feeling are easy to find with a quick Google search.

While not an overtly religious man, I do feel that this is appropriate:

“For now we see through a glass, darkly; but then face to face: now I know in part; but then shall I know even as also I am known.”

I guess when you can’t run on your own record; making up lies is the way to go. Now we know the true colors of Paul Crowley. Let them shine brightly upon him.