Cats currently in a Stillwater home that the NJSPCA is seeking to rehome. Photo courtesy of the NJSPCA.

STILLWATER – The NJSPCA (New Jersey Society for the Prevention of Cruelty to Animals) has intervened in a Sussex County case, where more than 40 cats were located in a Stillwater home.

The cats’ owner who hoarded the felines, however, will not be charged, as she is an elderly woman dying from cancer, and in hospice care.

The cats have been lodged indoors, and, according to Lisa Deutsch, NJSPCA Investigator, have not been spayed or neutered, and are not current on their vaccinations.

According to the Stillwater Township ordinances on Animals, the maximum number of cats permitted per owner in the municipality is five, unless the cats are kept in a kennel, pound, shelter, or pet shop, with full licensure held by the person who is caring for them. The only pet licenses specified on the township’s website applies to dog owners, although Stillwater Township notes that all dogs or cats within the municipality over six months of age, must be administered the rabies vaccine. 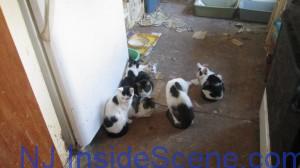 A view of several of the 40 cats that have been kept in a Stillwater home. The NJSPSCA has intervened and is seeking rescue groups and potential adopters to help rehome them. Photo courtesy of the NJSPCA.

While the cat owner is hospitalized, a family member has stepped up to the plate to care for the pets, until the NJSPCA can remove them, though this is creating a hardship for the relative, who is from New York.

“All seem to be friendly and for the most part healthy,” said Deutsch of the cats, which vary in ages, including kittens.

Deutsch noted, however, that there are two kittens dealing with different degrees of blindness, with one missing one eye, and the other missing both eyes.

“They are both very sweet,” said Deutsch of the cats.

Stillwater’s Animal Control Officer Alan DeCarlos reported to the NJSPCA that there were cats outside, though Deutsch said she did not see any when she was at the residence this past Monday.

“If there are, we will have to somehow deal with that problem too,” she added.

“Our great need is loving homes or shelters until they can be rehomed,” Deutsch said. ”Unfortunately, it is not their fault that their owner did not spay and neuter them and that situation got very out of hand inside the home. As always the animals suffer for human mistakes.”

The Animal Alliance of New Jersey located in Lambertville, has offered to spay, neuter, vaccinate, and deworm the cats for $25 each.  The family of the cat owner is willing to pay the fees for spay or neuter, and vaccination and worming of the cats.

The Animal Alliance of New Jersey has also offered to most likely take the special needs kittens, as the NJSPCA is having challenges finding rescues willing to take them.

Captain Richard Yocum of the NJSPCA said those interested in fostering and adopting these cats can reach out to DeCarlos directly at: (908) 377-0808, or go to the group’s website (click here) and use the “contact” tab to leave a message.

Donations can also be made to the NJSPCA for vet care, and to offset spay and neuter costs. Click here to donate. 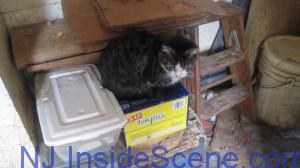 A cat is perched on a box, within its current home in Stillwater. Image courtesy of the NJSPCA.

The NJSPCA is the second oldest SPCA in the country, according to the group’s website, and receives no government or tax funding. All funds come from donations and grants.

“Hoarding is hard to understand for many people,” Yocum said, “but NJ SPCA deals with these situations far too often and honestly, it is sad. This time, we can intervene, and hopefully have a positive outcome for these cats.” 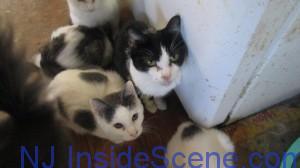 Cats peer up at the camera as they are visited by the NJSPCA. Image courtesy of the NJSPCA.