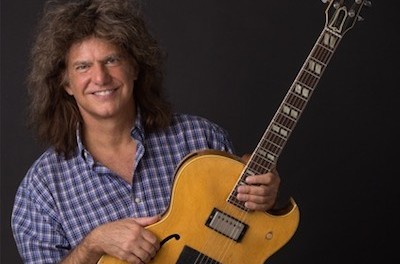 NEWTON, NJ  – The Newton Theatre welcomes legendary musicians Pat Metheny and Ron Carter on Sunday, April 24, 2016 at 8:00 pm. Tickets will go on sale to the general public on Friday, February 5th at 10:00 am.

Guitarist Pat Metheny is a 20 time Grammy winning guitarist and one of the most important and influential musicians of the past 40 years. Bassist Ron Carter stands tall as the most revered and recorded bassist of all time; a former member of Miles Davis’s iconic 1960’s quintet.

Following their triumphant and critically acclaimed performance at the 2015 Detroit Jazz Festival, the two legendary musicians enjoyed their time together so much that they decided to join forces to present a select number of concerts around the world in 2016.

Their Motor City debut was described as the “Best Set” of the four day festival by the Detroit Free Press.  Critic Mark Stryker writes “With just Carter’s bass walking behind him, Metheny’s connection to his roots bubbled up from his subconscious with thrilling results. The high point of their communion came on Carter’s Eighty-One, a blues whose presciently funky bass line, airy melody and fleeting gestures opened a window on the infinite and pushed both players into provocative dialogue.”

Both musicians have a long history in the duet format as members of arguably the two most iconic lineups in the unusual and challenging guitar/bass combination. Metheny and his longtime friend bassist Charlie Haden recorded “Beyond the Missouri Sky” a Grammy winning project in the 90’s that remains a recording with an almost cult like devotion. And Carter’s work with guitarist Jim Hall over several decades literally defined the territory of what a duet of this instrumentation could be. The Hall/Carter recording “Alone Together” remains one of the most important and influential entries in his vast discography.

Metheny and Carter have performed and recorded together occasionally over the years, with Herbie Hancock, Milton Nascimento and others, but this is the most intense playing the two have done together.

Says Metheny, “Ron has been a hero to me my whole life. I literally became a musician after hearing the Miles Davis Quintet record “Four and More” that featured Ron when I was 11. To get this chance to play duets like this with Ron is one of the greatest privileges of my musical life to date. What was a little unexpected to me was the level we were able to get to so quickly. We spent a few hours one day at Ron’s house playing and a whole universe of possibilities presented itself. It will be great to explore that world in depth over a bunch of different evenings and to take the audience on that journey of discovery with us.”