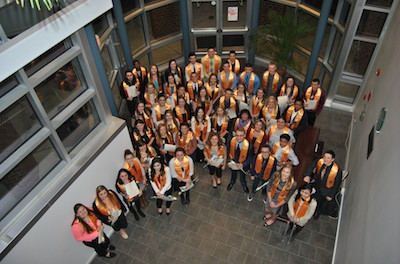 NEWTON – More than 100 Sussex County Community College students were recently inducted into the most prestigious honor society for community colleges in the United States.

Phi Theta Kappa International is the honor society for 2-year colleges and boasts members from throughout the country. Membership is based upon academic achievement. Among the criteria for induction, students must be enrolled in an accredited associates degree program and have a GPA of 3.5 or over. As a member of this organization, these students are eligible to apply for Phi Theta Kappa Transfer Scholarships offered by over 600 4-year colleges and universities located throughout the United States.

One hundred and one students were inducted into the organization during a ceremony held in March.

“Hard work and perseverance has paid off for these inductees,” said Scott Scardena, Transfer Counselor and PTK Advisor at SCCC. “These students are now part of an elite group of people who have achieved an important goal in their academic career.”

The following individuals were inducted: