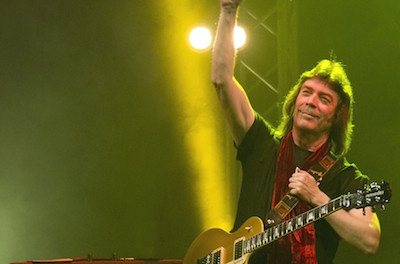 Newton, NJ  – The Newton Theatre proudly presents Steve Hackett, former lead guitarist of Genesis, on Sunday, November 15th at 8:00 pm. Tickets will go on sale to the general public on Friday, July 3rd at 11:00 am.

In celebration of his new album WOLFLIGHT released in April 2015, and the 40th anniversary of the release of his first solo album VOYAGE OF THE ACOLYTE, Steve brings to us a unique show of both solo and Genesis classics. Along with the superb pieces such as Ace of Wands and Spectral Mornings and a selection from WOLFLIGHT, Steve will conclude his two and a half hour show with yet more Genesis material that was not part of his previous Genesis Classics shows. Epic songs like Lamb Lies Down on Broadway, The Cinema Show, Can-Utility, Hairless Heart and The Musical Box will be part of this spectacular tour. It will be for many, the Total Experience, spanning Steve’s prolific output from early Genesis days to today.

Steve Hackett has released more than thirty solo albums in addition to the seven he did with Genesis, as well as his work with the super group GTR together with Steve Howe of YES. A productive but always quality oriented musician and producer, Steve Hackett is not one to miss under any circumstances.