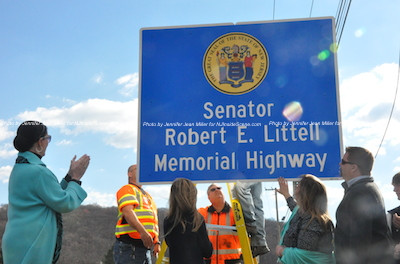 Ginnie Littell (left) claps about the sign just unveiled in memory of her husband, while daughter Alison Littell McHose (second from right) places her hand on it. Photo by Jennifer Jean Miller.

AUGUSTA, NJ – On the sunny, clear and brisk morning of Fri., Nov. 13, the Senator Robert E. Littell Memorial Highway was unveiled on Route 15 South adjacent to The Chatterbox, with family, friends and supporters of the late New Jersey Senator in attendance. 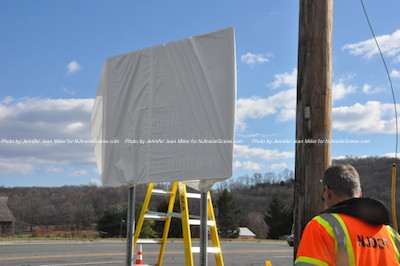 The sign before the unveiling. Photo by Jennifer Jean Miller.

Littell, 78 passed away on Nov. 14, 2014 after a long illness. The senator was beloved by many throughout the county, having risen up through the county first as a councilman in Franklin, then an assemblyman, and lastly a senator. His tenure in the New Jersey State Senate (R-24) commenced in 1992 and he stepped down in 2008.

Alison Littell McHose, the senator’s daughter, began serving alongside of her father as an Assemblywoman in 2003. She concurrently served as Franklin’s administrator beginning on Jan. 1, 2015. She resigned from her assembly seat this past month. The senator’s wife Ginnie Littell also served as the Chair of the New Jersey Republican Committee.

The day was bittersweet for the family, on the eve of the anniversary of his passing. Yet in the midst of the tears, there was joy, as they recognized the honor their husband, father and grandfather would have been touched with.

Assemblyman Parker Space and Senator Steve Oroho, who assumed Littell’s seat following him, made remarks at the beginning of the brief ceremony.

“I’d like to thank everyone for coming out,” Space who had known Littell since childhood, began noting the honor of the naming of the 10-mile section of highway after the senator.

Oroho thanked the parties that made the sign possible and then explained the unique honor he has with having served following Littell. He said that both sides of the aisle still often agree when they walk into the Budget Room in Trenton, “this is Senator Littell’s room.” 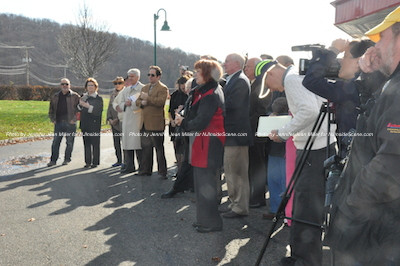 Those in support of the project and members of the media listen in to the remarks made during the program. Photo by Jennifer Jean Miller.

“He was a guy who said, ‘hello’ and ‘thank you’ and talked to everybody,” Oroho added.

Ginnie Littell explained that the dedication to her husband was “sort of bittersweet, obviously,” and that during Littell’s career he was passionate about transportation, and the importance of safe roadways. 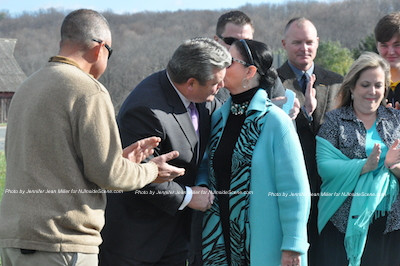 “He would be so humbled,” she added.

In spite of the many awards and accolades that Littell received during his time in the Senate, Ginnie Littell summed up his generous spirit with one of her husband’s quotes after being awarded for a particular honor. 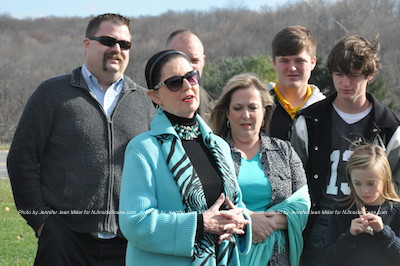 Ginnie Littell speaks about the passion her husband had for the transportation sector. Photo by Jennifer Jean Miller.

Alison Littell McHose and her brother Luke Littell, who flew in from Nevada to attend the unveiling of the sign in their father’s memory, next addressed the crowd. She thanked Governor Chris Christie for passing the bill, as well as those who signed it into law. 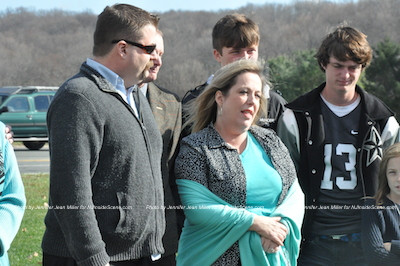 Luke Littell said that Friday the 13th was never considered unlucky to their father, and he used to say that there was “no number luckier than 13.” 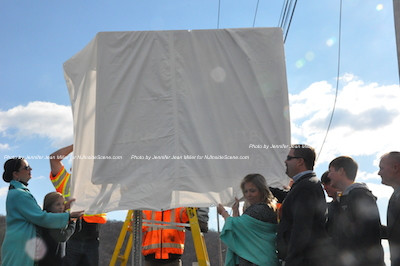 Senator Littell’s family begins pulling back the cover to reveal the sign made in his memory. Photo by Jennifer Jean Miller. 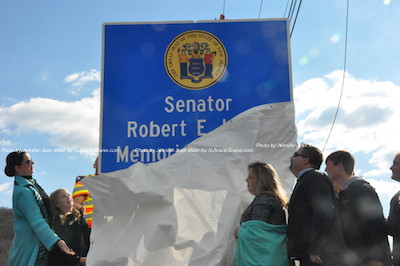 The sign cover is moved away. Photo by Jennifer Jean Miller.

“My father was born, raised here and died in Sussex County,” he said. “What a fitting honor to have a road named after him.” 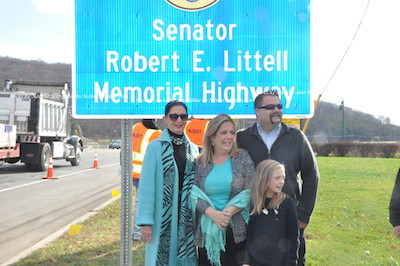