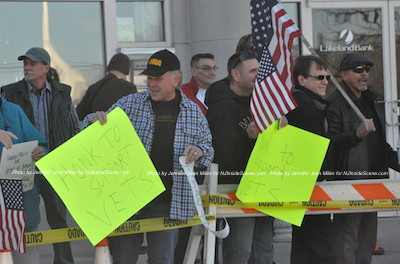 NEWTON, NJ – It was like the tale between two cities with two opposing groups straddling either side of Newton’s Park Place with differing interests on Sat, Dec. 5.

The Demonstrators offer a message that all in the United States are immigrants. Photo by Jennifer Jean Miller.

“Hey hey! Ho ho! Islama-phobia has got to go!” was chanted from the “Occupy Newton” side of the issue, comprised of a group lined up along the sidewalk in front of the Gazebo in Newton’s square. Those individuals toted signs for the NJ Peace Action, and signs emblazoned with a variety of messages, such as “Not Just Politically Correct, It’s Called Respect,” “This Land Is Your Land, This Land Is My Land,” “We Are All Immigrants,” and “We Welcome Syrian Refugees.” A couple of flags were waved on this side, including a white one advertising “VeteransForPeace.org,” and a flag with red and white stripes with a blue area in the upper left corner with a white peace sign. Later, the group broke into song with a guitar accompaniment to “Blowin’ in the Wind.”

Demonstrators in Newton rallying in support of the Syrian refugees. Photo by Jennifer Jean Miller.

“Say it loud, say it clear, ISIS is not welcome here!” was chanted on the opposite side of the street, with a later explosive chant of “USA” repeated over and over. The size of the counter demonstration crowd exceeded that of the demonstrators. “Support Homeless Vets, Stop Refugees,” was one message, plus “You Help ISIS,” “Protect America,” Veterans Before Refugees,” and “Honk to Support Vets.” This group flew numerous American Flags, and waved the yellow Gadsen flag with “Don’t Tread on Me” and the coiled serpent on it. This group broke into a small chorus of “God Bless America.” This side of the street boasted about 110 behind the orange barricade by the end of the two-hour event. 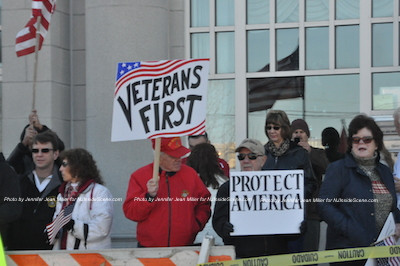 Those on the counter demonstration side hold up signs asking that veterans be placed first. Photo by Jennifer Jean Miller.

Members of the Newton Police Department and Sussex County Sheriff’s Office presided over the demonstration and counter demonstration. The Newton Police Department reported on its Facebook Page, “This afternoon there was a peaceful assembly of passionate citizens who exercised their right to express their views, supported by and in cooperation with professional law enforcement officers, resulting in no incidents requiring enforcement action.”

Newton’s Mayor Dan Flynn and Town Manager, Thomas S. Russo, Jr. also watched over the rallies briefly from the corner of Park Place and Main Street. On Dec. 3, the Newton Police advised the public on Facebook about the demonstration and counter demonstration, explaining ground rules in that participants on both sides were welcome to participate, as long as each side remained in the designated areas, and did not harass one another. 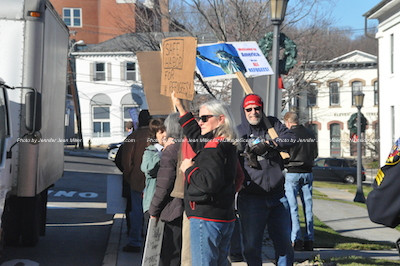 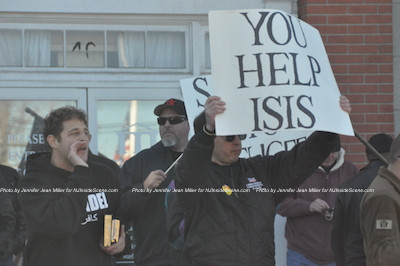 “You help ISIS,” was what one of the signs on the counter demonstration side reflected. Photo by Jennifer Jean Miller.

“It’s really important that we are the moral voice that continues to explain how the United States has a moral responsibility to house the veterans, house the refugees from Syria, and end the war,” one speaker said.

“I believe what the Statue of Liberty says, Ed Selby added later, reflecting on “give us your tired, your poor, your huddled masses yearning to be free.”

Selby continued that he was also a veteran and that those across the street could see his VA card in his wallet that they “don’t give those out for free.” He said the person toting the “VeteransForPeace” flag was his brother.

Barbara Kellam-Scott of Vernon later spoke to Inside Scene regarding a blog post that she said is from a group that often touts itself as Republican, the Cato Institute, sharing the post on the subject of Syrian Refugees not posing a threat. 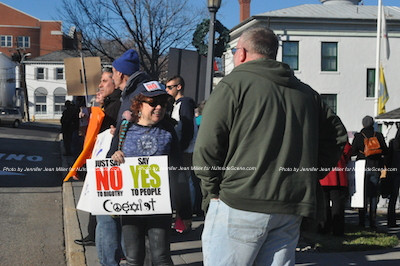 The Cato Institute, on the other hand describes itself as not receiving government funds, and that they receive tax-deductible donations only, and states on its website it is a think tank that supports libertarianism. The group’s post accordingly claims that the vetting system is “so thorough.” However, Wikipedia notes that the Cato Institute disagrees with the conservative front on particular topics including immigration.

Kellam-Scott told NJ Inside Scene that she believed if the taxation system was better in the United States, she said there would not be an issue of homeless veterans. When asked for a solution, she gave a nod to big business, including the Waltons (Wal-Mart) and even Donald Trump, because he owns hotel properties, to help house “vets, refugees, whomever.”

“We are a country of abundance,” she said. “We don’t need to be fearful of not having enough.”

Groups from the Counter Demonstration against the assimilation of Syrian Refugees and “Veterans Before Refugees.” Photo by Jennifer Jean Miller.

NJ Inside Scene asked Kellam-Scott about the lack of United States flags on the side of those she was with in the Occupy Newton group. “It didn’t occur to us that they’d [the counter demonstrators] be pretending they owned the flag,” she replied.

Bill Hayden of Branchville was the organizer of the counter demonstration. The group was described by one of the tea party members in attendance as a “mixed bag of vets and constitutionalists.”

Hayden told Inside Scene that when he learned of the demonstration with the Occupy Newton group, and began engaging the group’s Facebook Page with facts about the Syrian Refugees, his comments were deleted from the posts. That is when he said he knew he had to take action.

With friends who are Iranians and Syrians in the United States, Hayden said that those friends have also advised him that allowing these refugees in is not a favorable idea.

“’This is not good,’” his Syrian’s friend’s mother told Hayden.

Behind the barricade at the counter demonstration. Photo by Jennifer Jean Miller.

Hayden said that he could not see how monetarily it could be possible to take in the refugees either, with approximately 10,000 homes in Sussex County in foreclosure, and then about 4,500 people that are battling homelessness, and requiring resources and assistance around the area.

“It was a good turnout,” Hayden said about the counter demonstration group. It started with about 64 in the early part of the rally, with the number increasing to 85 and then concluding at 110.

A counter demonstrator gives a thumbs up while holding a sign that refugees can be taken into the demonstrators homes. Photo by Jennifer Jean Miller.

Support local! We are a woman-owned, family-run, grassroots, objective news outlet, offering the “inside scene” to every event we cover! Be a part of Inside Scene for all time! Donate here and have your name or the name of someone you would like to honor on the Inside Scene Wall of Fame. Click here to follow NJ Inside Scene on Facebook.