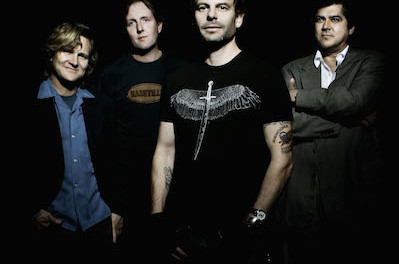 The Gin Blossoms courtesy of The Newton Theatre.

Newton, NJ – Gin Blossoms return to The Newton Theatre on Friday, October 23rd at 8:00 pm. Tickets will go on sale to the general public on Friday, August 14th at 11:00 am.

For more than two decades, Gin Blossoms have defined the sound of jangle pop. From their late 80s start as Arizona’s top indie rock outfit, the Tempe-based combo has drawn critical applause and massive popular success for their trademark brand of chiming guitars, introspective lyricism, and irresistible melodies. Gin Blossoms soon unfurled a chain of crossover favorites spanning five different formats, from Hey Jealousy and Until I Fall Awayto Follow You Down and the GRAMMY®-nominated As Long As It Matters,”earning the band sales in excess of 10 million in the US alone.

Singer/guitarist Robin Wilson, guitarist Jesse Valenzuela, and bassist Bill Leen co-founded Gin Blossoms in 1987 and quickly became the toast of the Grand Canyon State’s local scene. Blending an array of influences – from The Beatles and The Byrds to The Band and The Buckaroos – with pure pop songwriting and their own post-adolescent energy, the band hit upon a truly thrilling sonic approach that instantly set them at the forefront of the always-adventurous American underground.

“We were on a course,” Wilson says, “inspired by our influences. The bands that unified us were our forefathers like Cheap Trick and R.E.M, The Replacements and The Plimsouls. Those were bands that all of us as Gin Blossoms had in common. When people ask me, what kinda band are you in, I say, ‘We’re a classic rock band.’”

Having taken the local scene by storm with their magnetic live show, Gin Blossoms released their debut in 1989 with Dusted, on influential Arizona indie label, San Jacinto Records. It wasn’t long before the majors came around, with A&M Records ultimately the lucky label to get Gin Blossoms’ signature on a contract. “They really believed in us,” Valenzuela says. “They showed the support that made us a better band.”

Gin Blossoms released 1991’s self-recorded Up and Crumbling EP and got right to work on their major label debut. The band hit Memphis’ legendary Ardent Studio to record such now-classic tunes as Until I Fall Away, Allison Road, Hey Jealousy, and Found Out About You.

Justly regarded as one of the era’s milestone works, New Miserable Experience earned critical acclaim upon its 1992 arrival before exploding into the popular consciousness. Hey Jealousy was one of 1993’s essential singles, ruling the top 5 at Mainstream Rock radio before ascending to the top 25 on Billboard’s “Hot 100.” The following year saw Found Out About You  climbing the charts, eclipsing its predecessor by reaching the #1 spot onBillboard’s “Modern Rock Tracks” tally.

Congratulations I’m Sorry arrived in 1996 and immediately ascended to the top 10, fueled in part by the top 5 single, Follow You Down. Moreover, the album’s next single, As Long As It Matters, earned Gin Blossoms a prestigious GRAMMY® nomination for “Best Performance by a Duo or Group.” “It was pretty cool to lose a GRAMMY® to The Beatles,” Valenzuela says. “Who else would you want to lose out to?”

Having dominated radio and MTV playlists for most of the 90s, Gin Blossoms took a brief turn of the century hiatus, a provisional parting of the ways that Wilson chalks up to “personal dissatisfaction and the mistaken impression that we could perform at that same level with another group.” The brief break allowed Valenzuela and Wilson to reenergize. Gin Blossoms’ idiosyncratic magic proved impossible to ignore for long and on New Years Eve 2001 in their hometown of Tempe the band reconvened and never looked back.

“We’re entertaining and we have chops,” says Wilson, “but it really comes down to the songs. The reason we’re still here is that we have good songs. When young musicians ask me for advice, what’s the best thing to do to further my career, I always say, ‘Write good songs.’ It always comes down to that.”