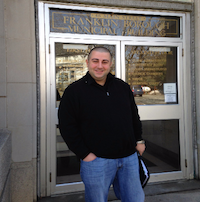 Skellenger kicked off the fundraiser by addressing the crowd and discussing some of his major campaign platforms including the support of local first responders, bringing new rateables to Route 23, the revitalization of Main Street, and to hold the line on spending.

Skellenger has been involved in politics on the local and state level for more than a decade, but this is the first time that he has declared himself as a candidate. He currently serves on both the Recreation Commission and the Zoning Board for Franklin Borough. As a life-long resident of Franklin and a recognizable name within the community, it will be interesting to see how this race shakes out in the coming weeks leading up to the June 2nd primary.