Thank You Veterans from NJInsideScene.com.

SUSSEX COUNTY – Many days when I am out and about in the county, perhaps walking in or out of a grocery store like Shop Rite, I often will make the acquaintance of one of the many veterans in our area. Some of them are easily identifiable, typically wearing a hat, or jacket, with their branch of service marked on their article of clothing.

Whether we strike up a conversation or not, I make it a point when I spot someone who is obviously a veteran, to thank them.

It is because of them that I have the choices that I do.

They made a choice too, and that choice was to enlist (or in the times of the draft, be drafted) into the service, to ensure the freedoms of other Americans of their own and future generations.

For all of us, they sacrificed, and some of them gave the ultimate sacrifice, with their lives. It is because of their efforts and their blood lost, that we who survive have the opportunity to live freely. From 1775, until the present day with the Afghanistan and Iraqi Wars on Terror, the death toll has been 1,321,612 deaths, 1,531,036 wounded, with a total of 2,171,991 in both categories.

World War II, however, has been the highest ranked in combat deaths, with 291,557 lives lost.

Out of the many stories that were impacted by that war, I am one of them, though I was born over a quarter of a century after it ended.

On December 24, 1943, a young private and his bride married in a base chapel at Seymour Johnson Field, in North Carolina. The pretty bride-to-be ended up on a train ride from New Jersey, the only lady in a car filled with soldiers. They all tried to speak with her, and she politely flashed her engagement ring.

The newspaper account of their special day, memories left behind in yellowed news clippings since both the bride and groom are together once more in the heavenlies, was run on New Year’s Day of 1944, and recalls the surroundings of the day –- the holly and pine branches pulled from the local forest, decorating the chapel, and the reporter noted, “the bride radiant in her Nile green dress,” with her procession down the aisle on the arm of the Lieutenant Colonel, to “the strains of the Wedding March.”

One of the most poignant reminders of the times, reflected in this wartime wedding account, was: “The drone of a plane flying over the chapel seemed to synchronize with the melody.” 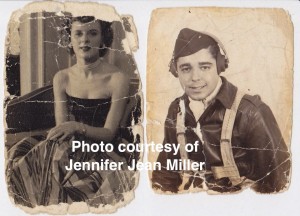 Jennifer Jean Miller’s grandparents, and the tattered photos she treasures, which were in each of their wallets, as they were apart from one another during World War II.

The couple married on this date, because he was permitted a day off the following day, Christmas Day, before he would have to be shipped off and she would return on the train to New Jersey, alone.

Thankfully, after a tour in the Pacific Theater, he returned home. They kept photos of one another in their wallets, which remain tattered from being lovingly kept and reflected on while they were apart from each other, and are a testament to their enduring love.

I am here today, because this couple, my grandparents, loved one another to endure the sacrifice, and she waited patiently for him to return. And with prayers and good fortune, he did.

There are many stories of sacrifice, and there are still today, with families separated miles from their loved ones –- wives from husbands, husbands from wives, fathers or mothers from their children.

They are sacrificing for all of us.

And the sacrifice is not only on the battlefield.  While many “sleep” through life, not participating or stepping out as we should, members of our military are always on alert, taking care of others, no matter where they are, or what they are doing, both on duty and off.

One of them is Chief Warrant Officer 4, Thomas Oroho, a 12th Aviation Battalion Soldier, who is the brother of Senator Steve Oroho (R-24). Officer Oroho saved a father and daughter caught in a riptide, while he was on vacation in Panama City Beach, in Florida, with two other soldiers joining in on the rescue. Officer Oroho received a Soldier’s Medal from General Raymond T. Odierno, Chief of Staff of the Army, for this act of bravery.

In a similar story, Airman Lieutenant Colonels Edward Casey and Ryan Messer rescued a boy from the wrath of a riptide, while on vacation on the Pacific side of the country, at Coronado Naval Air Station in North Island, California. Lieutenant Colonel Casey is the son of Ailish Hambel, Sussex County’s Republican Chairwoman. The two men sprung into action, and thankfully so, because there was a lifeguard shortage due to budget cutbacks on the beaches.

It is not only a coincidence in these two separate incidents, that there were parties involved with ties in the Northwest New Jersey area, who took such courageous actions. It did not matter to them that they were “off duty,” technically enjoying some time off. They all made sacrifices that could have also cost them their lives, in battling deadly riptides in their rescues. Thankfully, all were blessed with happy endings.

In turn, let us not sleep in our support for our troops, and be grateful each and every day for the sacrifices the members of our military make for us (as well as their families), in all hours of the day, in all circumstances. 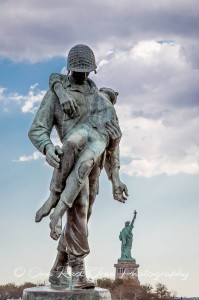 “Reaching for Freedom,” by Sara Hudock, of One Red Tree Photography.

For those who would like to reflect today with poetry, please click the video at the top of the story for a reading of the poem, “In Flanders Field,” and read the poem, “In Your Honor,” below:

Unselfishly, you left your fathers and your mothers,

You left behind your sisters and your brothers.
Leaving your beloved children and wives,

You put on hold, your dreams-your lives.
On foreign soil, you found yourself planted

To fight for those whose freedom you granted.
Without your sacrifice, their cause would be lost

But you carried onward, no matter the cost.

Many horrors you had endured and seen.

Many faces had haunted your dreams.
You cheered as your enemies littered the ground;

You cried as your brothers fell all around.

When it was over, you all came back home,

Some were left with memories to face all alone;
Some found themselves in the company of friends

As their crosses cast shadows across the land.

Those who survived were forever scarred

Emotionally, physically, permanently marred.
Those who did not now sleep eternally

‘Neath the ground they had given their lives to keep free.

With a hand upon my heart, I feel The pride and respect; my reverence is revealed
In the tears that now stream down my upturned face

As our flag waves above you, in her glory and grace.
Freedom was the gift that you unselfishly gave

Pain and death was the price that you ultimately paid.
Every day, I give my utmost admiration

To those who had fought to defend our nation.
~ Author Unknown ~

NJ Inside Scene would like to say, “thank you” to our veterans, past and present. Jennifer Jean Miller would also like to honor Jason Kennedy, who is an integral part of our team here, and who served in our U.S. Navy.

God Bless America and thank you to everyone who has served — we are grateful to and for you.