The icon that Dave Fanale currently has on his Facebook Page, which represents the AnCap beliefs.

SUSSEX COUNTY, NJ – Councilman David Fanale spoke out again about his viewpoints of the Roxbury Police Department, the Franklin Police Department, police departments in general, the upcoming council meeting and more, on an online webcast. Click below to watch the video, here for the link on YouTube and to listen to the broadcast.

The interview, which exceeds an hour in time, was broadcast on the “Voluntary Virtues Network,” which describes itself as a “platform for voluntaryists to advance the message of freedom.” The segment is entitled, “AnCap Councilman David Fanale Posts Pic Of Calvin Peeing On Local Cops Symbol.”

Some of the episodes in the channel’s previous videos, include “Episode 1, A for Anarchy: Introduction,” the “Jefferson Anarchy Hour,” and more.

Throughout the interview, he referred to police officers with derogatory vocabulary, beginning with two Roxbury Police Officers. Fanale accused them in a 2013 traffic stop of harassing he and his fiancée, and described the one officer as having being on steroids and having “roid rage.” He has said the stop, and their search of their vehicle, was illegal.

“I want these two f**ksticks to be accountable for what they did,” he told the panelists who conducted the interview on the “Voluntary Virtues Network.”

He described the officers as “abusive” and “belligerent.”

“These guys have serious problems and need serious coaching and counseling,” Fanale added.

He said some of his issues with the police department in Franklin began with his dislike of the department’s use of plate scanners, and red light cameras, some things he said he spoke passionately about during his campaign.

The one day he made the decision to post something that has incited law enforcement across the nation.

First, it was Fanale’s post about the Roxbury Police as “pigs,” which has caused him what he said, was a loss of friends, including those in law enforcement in the Sussex County area.

“None of them asked, ‘what the hell is going on?’” Fanale stated in response to his post about the Roxbury Police.

It was then when he upped his ante, and sought out a cartoon for his Facebook Profile Photo, he said, of a pig and a blue and black background. Afterward, he found the thin-blue line symbol, and Calvin cartoon.

“That thin blue line symbol was not created to memorialize police officers,” Fanale and the panelists who conducted his interview, agreed among themselves.

Fanale said the backlash occurred instantly. One person wrote him, he said, “That’s real nice of you, you should be ashamed as a councilman, pi**ing on the blue line.”

Fanale then described text messages [Editor’s note: actually Facebook message], he received from the author of this story, who he described as a “freelance reporter” that he knows.

“This is not a brotherhood symbol, I thought it was a gay pride symbol,” he told interviewers, referring to the police emblem, of which Fanale and his interviewers snickered while discussing the topic. He further elaborated that he felt the symbol alluded to a feeling when he first posted it to, “I’m a cop, you’re a cop, let’s share a milk shake together with two straws.” 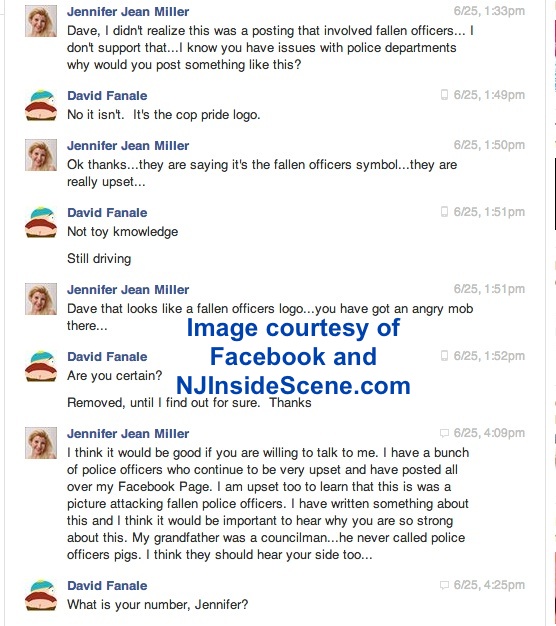 The Facebook Correspondence that occurred when reporter Jennifer Jean Miller notified David Fanale of the meaning behind the “thin blue line.” Fanale references this in his interview on the “Voluntary Virtues Network.” Note, Fanale has indicated he was driving when this conversation took place, via chat. Image courtesy of Facebook and NJInsideScene.com.

Fanale told interviewers that the author of this story notified him, “David, they’re saying that this is for fallen police officers killed in the line of duty.”

“No it’s not, no it is not,” Fanale recounted how he reacted to the response, and continued. “And she said, ‘Yes it is.’ I’ll tell you what, I’ll take it down ‘till I find out otherwise.”

Fanale further said about police officers in the interview, “I feel sorry for them in a way, because they’re so f**king pathetic, they’re so weak.”

Fanale said after the posting of the cartoon, his business was attacked online, with 717 negative reviews left on his Facebook Page, which he shut down, and also on his Google Plus Page. He has said since, he has received an endless stream of calls that have been pranks, harassing, screaming, moaning, and mocking voices.

He has described police officers as “terrorists” and “Muslim Extremists.”

“The town can be punished by this choice of reckless behavior,” he said.

He feels there is little risk for the rural police officers, and the possibility that they are risking their lives, he describes as “rhetorical bulls**t.”

“I don’t see how these guys can get up in the morning and think they’re contributing anything to society,” Fanale said. “They don’t do much most of the time.”

“This same reporter has criticized me,” Fanale said referring to the author of this story, “because my comments on Facebook have been borderline anarchism.”

Fanale confirmed the mayor asked him to resign, and described that the attendees at the upcoming council meeting on July 8 will include “not just cops, it’s firefighters, EMT’s, and other sycophants.”

He joked with interviewers about these parties in attendance at the meeting. He said suspected once he was allowed to make his statement, which the mayor has given him an allotted amount of time, Fanale will be booed. The interviewers told Fanale he should bring a can of compressed air to the meeting, with a bullhorn.

Fanale said the public will be allowed to speak, for no more than three minutes, and the mayor will allot that process to 20 members of the public, approximately. Fanale described in his interview, he would only have to “sit through it, for an hour,” and then “get on with the council meeting.” [Editor’s Note: in this article, the mayor has indicated the town would accommodate as many people as possible, which is information that conflicts from Fanale’s statement during his interview].

Fanale said during the interview about his Facebook posting, “What takes place on someone’s Facebook Page, should have no bearing on the job duties as a councilman.”

He described citizens overall of not caring about the issues that he feels police cause. And described them as not caring to go to the polls, and instead watching television and voting party lines.

Fanale told the interviewers he was a “model citizen, and active in the community,” and his fiancée was a kindergarten teacher and Girl Scout leader. He said now she has apprehension when she drives after the stop in Roxbury, and is fearful whenever a police vehicle drives behind her.

Fanale feels that citizens should become educated, and suggested they support “Cop Block” and other sites.

“I’m 47 years old, and I’m just coming around,” he said of his own developing views.

“It’s the white elephant in the room,” he said of the police departments, “and I’m the kid saying the emperor has no clothes.”

“I feel like a born-again Christian right now,” Fanale said of his revelations with what he has educated himself with, something he described previously to NJInsideScene.com, in his interview with this publication (click here to view), which he told NJ Inside Scene, he began searching for different answers on his political theories in 2012.

He delved further into his AnCap beliefs in his webcast interview, and said when he met people who subscribed to AnCap principles, who “kicked his a** in debates,”  he realized, “I gotta study these people, they are unbelievable.”

Editor’s Note: NJ Inside Scene has provided a screenshot below of what Fanale has described as “criticism of his views,” from us in his interview. We see it as not criticism, but pointing out the obvious in an objective manner. We had also posted the “AnCap” flag after learning the meaning ourselves and seeing it on Fanale’s Facebook Page as his profile picture. After having told our publication only a few days ago, and the public that he was a “Libertarian” and now revealing himself as an AnCap subscriber, the author of this story, who is also the editor of this publication, feels Mr. Fanale has not only deceived the publication in our previous interview, but the public as well. We also feel he has deceived voters if these have been his deeper longtime political beliefs, and he told the public otherwise. We posted this image to inform and educate the public that has been following his actions, and this story. 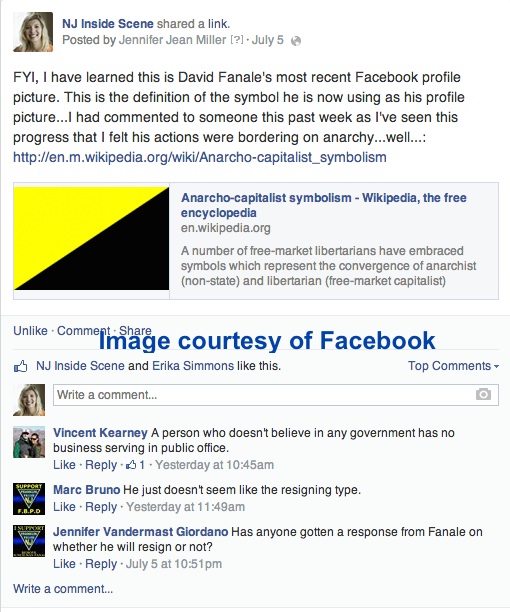