Jonathan Andrews of the Springboard Shoppes (far left), and visitors to the Newton Winter Farmers' Market, stop by the Jersey Barnfire Hot Sauce table for samples, with John Sauchelli (left) and Austin D-Almeida (right), the team that created the original sauce.

NEWTON – Purchasing farm fresh and other quality items made in the Garden State is possible beyond the typical time when the weather changes cooler and winter sets in.

There is something for everyone at the Newton Winter Farmers’ Market, held each Saturday, through April 23, 2014, at the Springboard Shoppes in Newton, from 10 a.m. to 1 p.m.

Newton Medical Center is the sponsor for the Newton Winter Farmers’ Market.

This past week, chef Priscilla Moynihan from Andre’s Restaurant & Wine Boutique, demonstrated the preparation of Andre’s Sausage Stuffing, encompassing items found readily at the farmers’ market. The stuffing had a wonderful texture and flavor, and it was terrific to see the support that a fine establishment like Andre’s provides to local farmers and purveyors, by using their items.

Chef John Sauchelli was there with his friend and business partner, Austin D’Almeida, with samples of their Jersey Barnfire Hot Sauce.

In addition, there was live musical entertainment at The Table, a spot for “coffee, conversation, and camaraderie.”

Click here to check for upcoming farmers’ market vendors, posted within a day or two prior to the market.

NJInsideScene.com had the opportunity to speak with many of the vendors there on Nov. 23. Here are some highlights from this past week:

Friends John Sauchelli and Austin D’Almeidia were friends in Essex County, and then lost touch. They reconnected via Facebook, discovering both were now located in Sussex County. The two decided to meet at D’Almeidia’s house.

“We had beers one night, and he saw my hot pepper garden,” Almeidia said.

Sauchelli, who has worked as a pastry chef for the last 15 years, had a hot sauce recipe, which would work great with Almeidia’s peppers, and the rest is history.

“I’m surprised I went down the sweet path,” he said, in terms of his work with pastries.

D’Almeidia works in the HVAC industry.

The two teamed up and Jersey Barnfire was born.

“This is our part-time gig, we want to make it our full-time dream,” said D’Almeidia.

The two said out of approximately 10 people who sample the sauce, three buy it. D’Almeidia’s co-workers, he said, often keep jars on hand to accompany their sandwiches at lunch, and have already re-ordered for themselves, and for their friends.

“From Our Comb to Your Home” 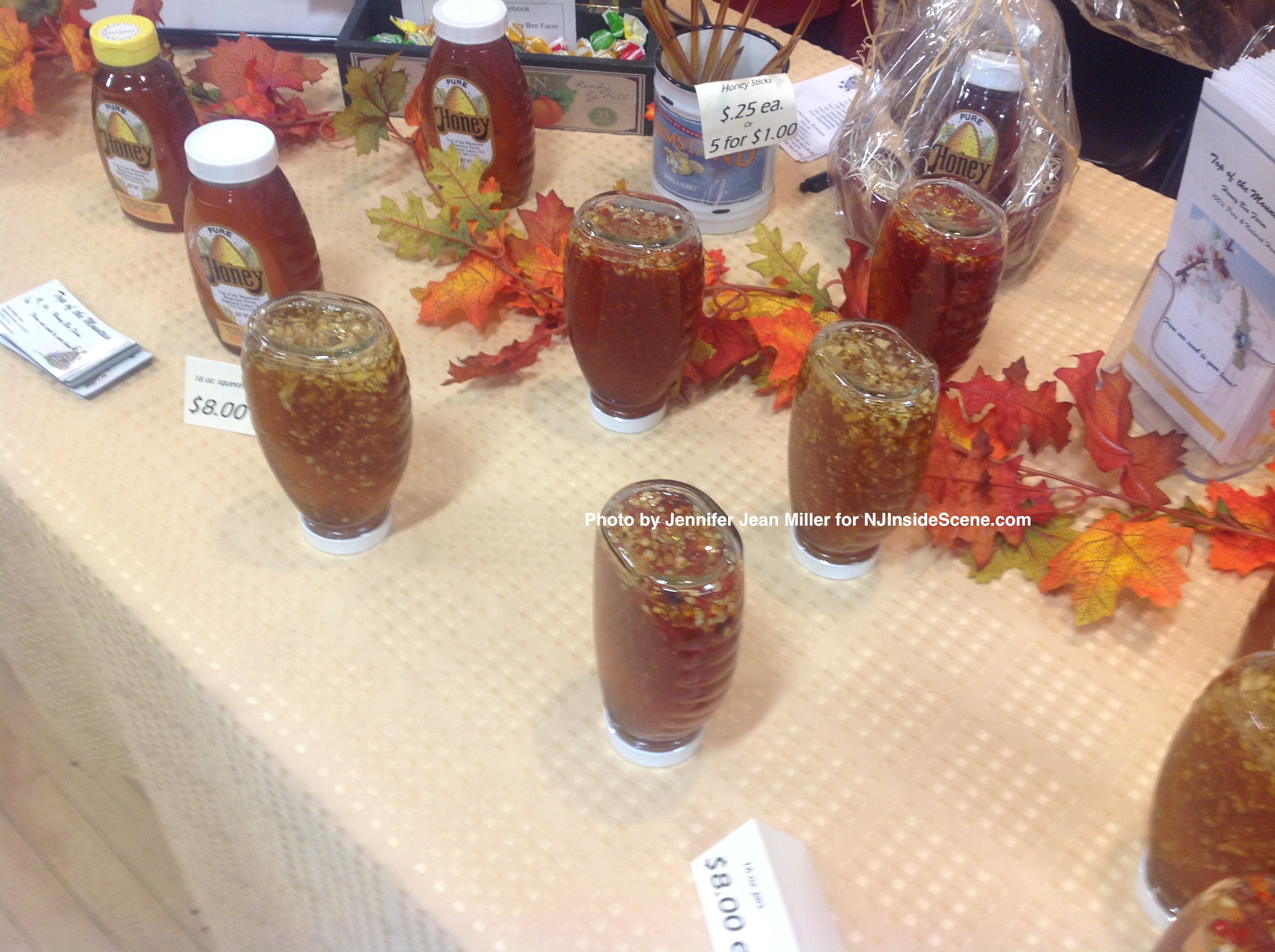 Honey infused cinnamon, garlic, and hot pepper, are some of the delicacies created by Top of the Mountain Honey Bee Farm.

Donna Coco considers herself the poster child in terms of her personal knowledge about the benefits of honey, which goes beyond raising the bees on her farm.

“I take honey daily, and I’ve had no allergies, and haven’t been on medication in two years,” she said.

As the owner of Top of the Mountain Honey Bee Farm, her company brings their honeys to many of the local farmers markets, and some retailers stock it as well.

At Coco’s honeybee farm, honey is harvested twice a year, in June and in October.

And the honey has other surprises as well.

Coco received many requests for honey infused with cinnamon — it is proclaimed to help with a variety of ailments from upset stomach to the flu, as an immune system booster, to promoting weight loss. And now that variety is one of her top sellers (at Saturday’s market she ended up sold out). Some of the other favorite varieties were honey with garlic, and honey with hot pepper.

Honey sticks are another treat she has on hand, which can be eaten on their own, as a sweet, natural treat. The author of this story can vouch for the honey sticks as she enjoyed one, as did members of her family who tried them when she brought them home – and they were delicious.

Speaking with Peggy Kelly from Glenmalure Farms, as it was with all of the other vendors, was an education. At the farmers’ market, those with spots there will take the time to explain to those who patronize the market, the benefits of the items they sell (which are many, in terms of quality, price, and health benefits).

All of the animals that they raise for meat are handled differently than those, which are often purchased in the supermarkets. Many supermarket meats may have been fed antibiotics.  According to the website, sustainable.org, industrial farms often feed their animals antibiotics, to help with their growth, and “to compensate for the unsanitary conditions in which they are raised.” The article states that 75 percent of the antibiotic remains in the bodies of the animals and that 80 percent of all antibiotics in our country are fed to farm animals. Humans, in turn, ingest those antibiotics, which can increase our susceptibility to antibiotic resistant bacteria. That also adds to skyrocketing medical costs for us.

Animals at farms like Glenmalure, on the other hand, live differently. Kelly explained at the industrial farms, livestock are often kept contained in not the best conditions.

“There is less stress on the animal,” she said of the way that her farm takes care of their animals.

The beef and lamb at Glenmalure are grass-fed, and a Google search of “grass-fed beef” brings up Glenmalure as one of the top that has information about it. Click here for the story. Peggy’s Husband Pat, who hails from Ireland, comes from a tradition of family farming there according to the article, and understands the benefits of allowing animals to be grass fed (versus other feeds that are used in industrial farming), and “naturally raised as nature intended.”

Not only are the cows and lamb able to freely graze, the chicken and pigs at Glenmalure are considered “free range,” meaning they are able to graze outside as well.

When farm animals are allowed to exist as intended, instead of in unnatural conditions often created by the larger industry, it is better for humans and for the animals.

Kelly also said that the beef and lamb from Glenmalure are processed via Halal techniques. When animals are slaughtered with the Halal method, they are done so by the throat, which is considered more humane and less stressful on the animal.

In this article, it explains how animals are processed at larger processing plants, and how they live out their lives before becoming food. Many, as the author worded it, “see very little grass nowadays in their lives.” By the time they are six months old, they are taken from their mothers (which is traumatic for both mother and their babies), they typically stop eating grass, and then are switched to a diet of corn, until they are slaughtered at age 14 months, which can also make them ill.  That is when the antibiotics are kicked in, and the animal becomes stressed. . Often, the animals are given the antibiotics and more, because in the end in the industrial cycle, the larger farms make more profit. When the animal is slaughtered, the process is different than described above –- with the cow experiencing a death that the writer of the story (who owned a cow taken in for slaughter), was not allowed to see – in which the animal was first “stunned” in an attempt to render it brain dead, then cut in the aorta.

It is obvious that Lenny Ojeda, one of the representatives of Paolo’s Kitchen in New Providence, builds relationships wherever he takes the Paolo’s Kitchen items. He is friendly, helpful, and takes the time to answer any questions about his products.

Equipped with large storage containers filled with gourmet entrees such as Eggplant Rollantini (a signature item of the caterer, and a favorite), different types of lasagnas, chicken dishes (the author of this story took home Chicken Francese, which was prepared with fresh lemon juice, and wonderfully flavored – plus, the portion was generous and enjoyed over several meals), meatballs, side dishes, soups,“extras” (their wonderful vinaigrette dressings, and tomato and basil sauces), kids food items, desserts, and more. They had many samples for the market attendees to try.

“We support local,” Ojeda said of the ingredients used in their items. 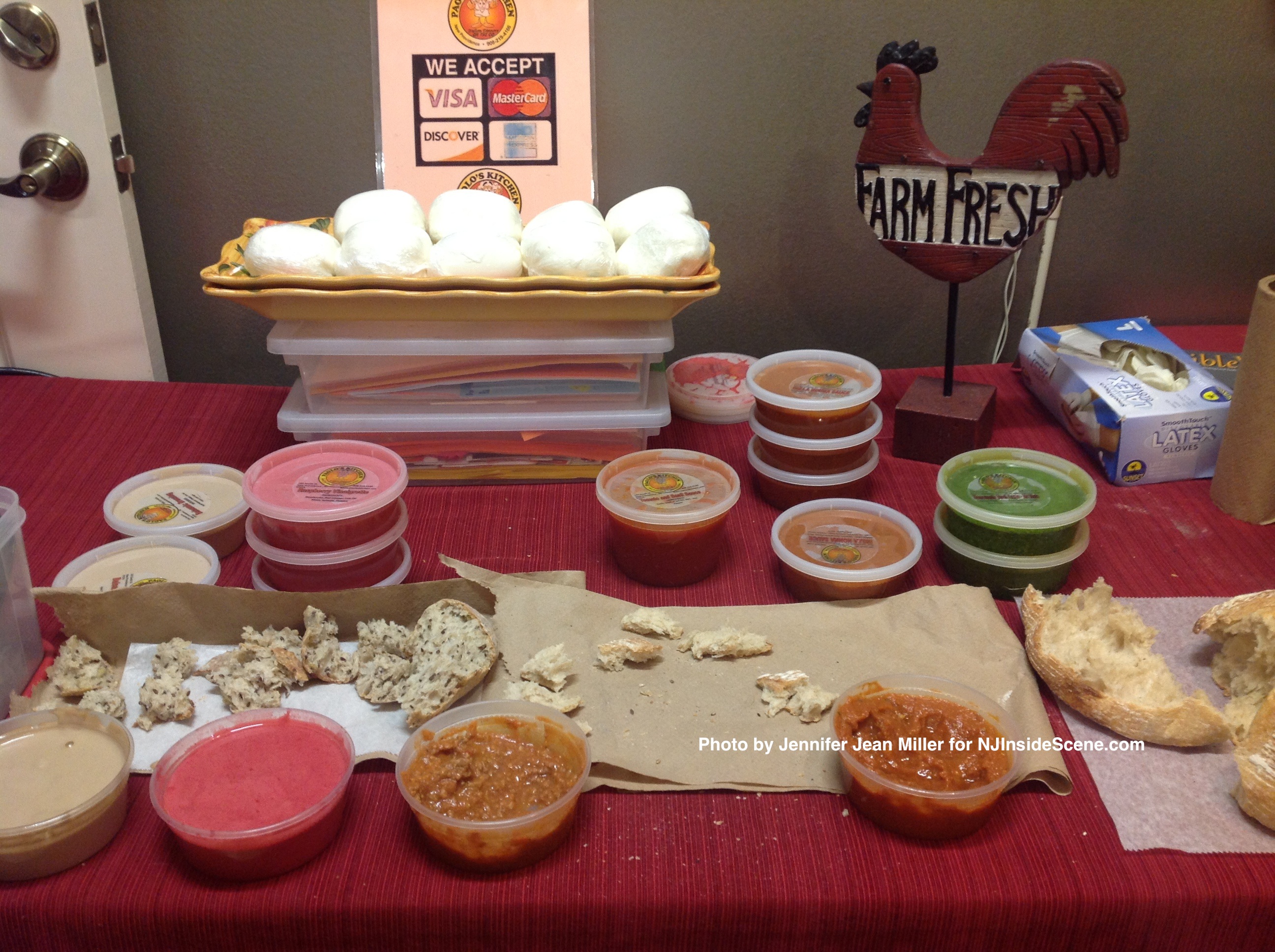 A sampling of sauces and dressings from Paolo’s Kitchen.

And their items are made in smaller batches so the freshness is ensured. Fore example, he brought freshly made mozzarella, prepared the night before, to the market.

While Ojeda was there, he surprised one of the other vendors by purchasing her bread for customers to sample his sauces.

“Anything I do [at local farmers’ markets he attends] I mix with other vendors,” he said. “It shows support.”

Items from Paolo’s Kitchen, such as their Eggplant Rollantini, which was frozen, but tasted as if it was just freshly prepared because of the quality ingredients used, are restaurant quality and affordable.

Paolo’s Kitchen, Ojeda explained, has a wide selection of gluten free, recognizing the need for their clients. And those items are prepared and kept separately. There are also dairy and vegan free items, and no nuts in their items, he said, including Pesto, to help those with food sensitivities.

“Seventy percent of my customers are moms,” Ojeda said, as they appreciate the foods are healthier with no preservatives.

Paolo’s Kitchen, in addition to its presence at 28 farmers’ markets throughout the state, also ships its items nationwide.

Walking by the Godlewsky Farms booth was impressive, and so was the knowledge of sisters Stefania and Rachael Swider, two representatives of the farm,  that answered questions the day they were at the market.

The spinach they stocked was a vibrant green, fresh and crisp looking, for example. There was garlic, Swiss Chard, Kale, and Brussel Sprouts, which many were walking away with. They had completely sold out of their carrots.

“There’s different kinds of nutrients in our soil,” they explained.

The soil they described as “muck soil,” because the farmland used to be a lake.

The soil is darker, and, in turn, the produce, Rachael Swider said, “grows better, is sweeter, and lasts longer.”

Stay on scene, with NJ Inside Scene. And stay on the scene with us online, by clicking here for our Facebook Page!