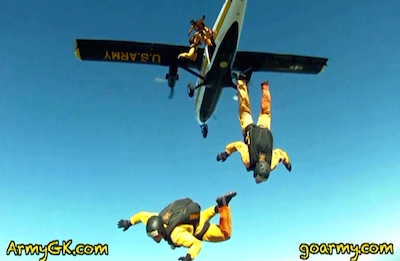 The Golden Knights. Image courtesy of the Patriots' Path Council.

CEDAR KNOLLS, NJ  – One highlight of Patriots’ Path Council’s 2015 Liberty Jamboree, scheduled for October 2 -4,  will be precision landing in Liberty State Park in Jersey City, NJ by The Golden Knights, who are members of the US Army Parachute Team. Conditions permitting, the jump will take place at noon on Saturday, October 3rd.

The U.S. Army’s Golden Knights are recognized as the most skilled parachuting competitors and skydiving demonstrators in the world.  Stationed at Ft. Bragg, NC, the Golden Knights cross the globe to support the Strategic Outreach Program, to compete in national and international competitions, and to evaluate equipment and techniques for improved operations and safety.

Attended by 5,000 local Boy Scouts and thousands of day visitors, the 2015 Liberty Jamboree marks the first time that overnight camping has been allowed in Liberty State Park since the 9/11 terrorist attacks.  Nearly 5,000 Boy Scouts, Sea Scouts and Venturing Scouts will learn from and participate in scores of demonstrations and activities hosted by 8 major colleges and universities, dozens of military and emergency service units, and several conservation and sustainability organizations.

In addition to the Golden Knights, the Liberty Jamboree will feature everything from a NASA Astronaut and a NASCAR driver to hands-on activities including an extreme obstacle course, backwoods engineering, zip-line, tomahawk throw, drones, robotics, rockets, log rolling, a crane simulator and even construction of a “Habitat for Humanity” house.

The Jamboree theme and program activities (all listed here) are STEM-related (Science / Technology / Science / Math). The program is open to the general public on Saturday, October 3rd. Gates open for day visitors at 9:30 a.m. There is a $10 admissions fee.  For additional information regarding the 2015 Liberty Jamboree visit www.libertyjamboree.ppbsa.org or contact Bill SanFilippo at (973) 765-9322 x227 or bill.sanfilippo@scouting.org.

The Patriots’ Path Council, Boy Scouts of America (Council #358), is a not-for-profit organization dedicated to preparing young people to make ethical choices over their lifetime by instilling in them the values of good character, citizenship and personal fitness. Each year, the council serves more than 16,000 youth members and 5,000 leaders in the counties of Morris, Somerset, Sussex, Union and parts of Middlesex, New Jersey. Some 400 local organizations have a Cub Scout pack, Boy Scout troop, Venturing crew, Varsity team or Explorer post as a part of their service to youth.