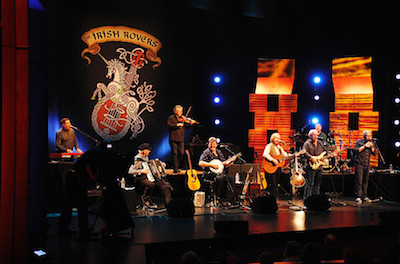 NEWTON, NJ  – The Irish Rovers celebrate 50 Years of Music at The Newton Theatre on Friday, November 27th at 8:00 pm. With a career spanning 50 years they’re now selling out their final world tour – while still getting top reviews. Tickets will go on sale to the general public on Friday, October 16th at 11:00 am.

The band first became known on American television in the 60s. As guests on The Tonight Show, The Smothers Brothers Show, Mike Douglas Show, The Virginian, The Dating Game (George Millar actually won the date), and many more, they gained experience before hosting their first of three television series “The Irish Rovers Show” in the 70’s. At that time, fans enjoyed their early hits likeBlack Velvet Band, The Unicorn, Whisky on a Sunday and Wasn’t That A Party. These days, they’re back on the radio, releasing television specials, and they’ve gone viral with Drunken Sailor!

As ecstatic evangelists of Celtic music, the Irish Rovers who have zealously spread the word about Irish folk music, returned to Ireland last May as a treat to themselves. “As a celebration for us, we took over Lismore Castle for a few days,” says George Millar. “Half of us live there anyway so it’s wasn’t that difficult. We threw ourselves an anniversary party with lots of music and a good supply of Guinness – a kind of pub session that lasted four days.” he says with a laugh. This is all part of the band’s 50th birthday celebrations.

Audiences will be the first to see their new (long in-demand) Children’s album, “Songs for the Wee Folk” which will be available at concerts! Everyone should stay tuned for the next DVD “LIVE on St. Patrick’s Day” due out next March.

Over the years, The Irish Rovers became cherished music icons, have touched three generations of music lovers, and brought Ireland into North American living rooms with their three television series that spanned over twenty years.

The days of the long tours are coming to an end for these lads as they are now completing one last world tour. After that, they will rove again only for special events, festivals and longer stays. International touring will happen only on a very limited scale.

On this, their final World Tour, fans will enjoy a mix of their hits, rollicking Jigs and Reels, plus hilarious stories from their years on the road.