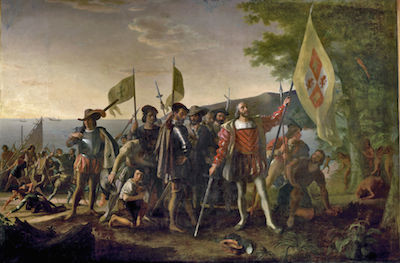 The Landing of Christopher Columbus in a painting by John Vanderlyn. United States Public Domain Image.

NEW JERSEY – While many municipalities in the Garden State are embracing the Italian-American heritage that is strong in New Jersey, and are recognizing Columbus Day with parades and fanfare, a movement is building across the country in other places embracing the Native American culture instead on the same day.

Among places in New Jersey that have hosted Columbus Day Parades this year are: Jersey City, Long Branch, Nutley/Bellville and Seaside. Across the river in Manhattan, Columbus Day is recognized with an elaborate parade.

In many states, Columbus Day is a public holiday the second Monday of every October, with schools closed on this day, as well as many post offices and bank. However, this can vary from state to state, and municipality to municipality. It is not a law that schools close, or post offices, though many do.

Most Gen X children and prior were infused with the knowledge that Christopher Columbus was the discoverer of the United States, with students tasked to remember the year 1492, and if it was even more specific, the date of Oct. 12, 1492.

Yet for some of those Gen X’ers, the tide began to turn in some university settings as certain professors became more outspoken during lectures about the “cons” surrounding citing Columbus as a murderer, rapist, and genocidist who slaughtered the Indigenous/Native American people he encountered during his explorations. These statements would change the paradigm for many scholars who grew up with the idealized view of Columbus as the world-exploring hero.

Columbus and “The New World”

As an explorer, Columbus sought financial support from the Spanish Crown before proceeding to locate the best trade routes and places for Europe to colonize. One of his destinations, for which he received compensation to explore, was the East Indies, where he made several voyages and eventually became governor in Hispaniola, a role from which he was eventually dismissed, prior to his arrest.

Spain’s King Ferdinand and Queen Isabella had hopes to conquer particular territories for Spain and offered Columbus governorship in return for his land discoveries, and the title “Great Admiral of the Ocean.”

While many history books from the childhood of many Gen X’ers and earlier portray friendly meetings between Columbus and the indigenous people that he met in the Americas, that was folklore, which was grossly misinterpreted.

In his first voyage of October 1492, the peoples that Columbus met greeted him with friendliness, yet upon noticing their gold, Columbus took some of them hostage and demanded they take him to the gold.

He listed in his journal that the people he met fended off attacks of slavery, but that they “ought to make good and skilled servants, for they repeat very quickly whatever we say to them.”

Part of the conquering was also not for fiscal benefits, but to spread the message of Christianity.

“I think they can very easily be made Christians,” wrote Columbus, “for they seem to have no religion. If it pleases our Lord, I will take six of them to Your Highnesses when I depart, in order that they may learn our language.”

He noted their primitive weapons, and realized he could “conquer the whole of them with 50 men, and govern them as I pleased.”

After some bloody encounters with another less friendly group, Columbus left the islands and returned in 1493 with settlers to colonize the region.

And in colonizing the areas, that also meant that the women of those areas were captured as plunder for the pleasure of Columbus’s friends, much to their dismay. One such woman fought back against his advances with strength, until she was subdued with a harsh beating by rope, the friend wrote to Columbus that generated “such incredible screams that you would not have believed your ears.” After her beating into submission, the friend reported that he and the Caribbean beauty he was gifted “came to such terms, I assure you, that you would have thought that she had been brought up in a school for whores.”

It is no wonder a woman may have opted for that path, as the colonists subjected the indigenous people to bloodbaths. However, he did not support genocide directly, because he and the other colonists used the slave labor that they dominated in the indigenous peoples and exploited them to their advantage. But the genocide occurred from his exploitation of the peoples that were enslaved, and who crossed Columbus and crew for differing views.

Many with Italian heritage embrace Columbus Day not for Columbus himself but because he technically hailed from Genoa, in the northwestern region of Italy. Yet Italy was not officially a full-fledged nation until it underwent unification, or “Risorgimento” beginning in 1815 and ending in 1871, when the states (some reluctantly) unified under one flag.

Although many credit Columbus with having discovered America as “The New World” and reporting it back to Europeans, prior to Columbus was Leif Eriksson aka Leif Ericson and Leif Erikson, of Norse descent, a Viking explorer who was initially a pagan that discovered Christianity. Like Columbus, Erikson also had the mission to deliver Christianity throughout the places that he landed. One stop was Greenland, and another suspected to be Newfoundland, reportedly in 999, about 500 years prior to the arrival of Columbus.

Little is reported in detail about the reception that Eriksson may have received, though it is known that it is known that between the climatic conditions with the weather, and skirmishes with the Native Americans, the Norse crew did not have the settlement impact with their invasion that Columbus did. One can anticipate though his intentions were unfriendly, with plans of conquering those indigenous to the area.

Nonetheless, as Columbus Day received its first run as a holiday in 1937, so did Leif Erikson Day in 1964. Yet, this day does not have the impact that Columbus Day has, with it an observance, but no formal holiday celebrations throughout the nation.

In Critique and Support of Columbus

Many media outlets have stopped whitewashing the Columbus myth, with some evaluating the debate of Columbus in a more objective manner, while others are more defamatory.

One publication described Columbus as a “lost sadist,” condemning the idea that a holiday should be declared in his name, and calling him out as a tyrant whose crews killed off natives with diseases they carried from Europe, as well as the greed in cutting off the hands or ending the lives of the Native Americans who refused to lead him to their gold mines. This same author described Columbus as a “vicious slave trader” who precipitated the suicide of 50,000 lives. He said that those who celebrate this day could come up with a better hero to reflect the pride of Italy.

Another has coined Columbus as a “genocidal maniac” and “bumbling idiot.” This author said that there are others who could be celebrated, and Columbus was a “self-aggrandizing jerk who largely stumbled into the history books despite getting a whole bunch of things wrong.” This author noted too that as well as Columbus bringing European diseases to the new land, with the extensive exploitation of women that Columbus’s friend bragged about, those sailors returned to Europe with cases of syphilis and pox that exterminated the population of Europe by about five million.

A report in NJ.com also airs about the removal of monuments in Philadelphia in Columbus’s honor via a petition to the mayor.

On the other end of the spectrum, a NJ.com reader reflected in a letter to the editor recognizing Columbus was not the first person to set sail to the Americas, and that there may have been others not reported, but that because of his spirit, he should be remembered. This reader described Columbus as having left a legacy with the elements of inspiration, imagination and intensity.

While Indigenous People’s Day/Native Americans’ Day has not taken off yet in many places, including New Jersey, some have swapped out Columbus Day with a day with this title. In South Dakota, the state made the switch in 1989, calling it the “Year of Reconciliation,” and proclaiming the date that most of the nation celebrates Columbus Day to “Native American Day.” Berkeley, California did the same in 1992, calling that year the “Year of Indigenous People,” with the “Native American Day” kicking off on the fourth Friday of each September. Local observances in parts of California, Minnesota and Washington State are held the same day each year as Columbus Day.