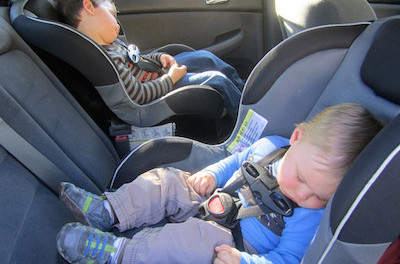 TRENTON – The revised car seat laws may mean big changes tomorrow for families, as it goes into effect tomorrow, Sept. 1.

Governor Chris Christie signed off on the revised legislation in May, clarifying what many considered confusing and antiquated car seat laws.

After this, children must stay in a front-facing five-point harness seat until they are four-years-old and 40 pounds, once they have passed the upper limits of the rear-facing car seat.

After that, children must stay in a booster seat until they are age eight, or 57 inches of height. Prior to the update to the new regulations, children could opt out of booster seats either at eight-years-old or 80 pounds.

Once a child has either attained eight years of age, or 57 inches in height, they can be seated while wearing a seat belt.

All passengers, including those 18 and up, are mandated to wear seat belts.

According to state statistics, three out of four children are either not properly restrained, or not restrained at all in car seats as mandated under the law.

In New Jersey, car seat checks are ongoing and free in all of the counties at various locations. Click here for information.

New Jersey’s law follows guidelines set by the American Academy of Pediatrics, and is the first state in the nation to apply all safety suggestions set by the organization.

Those who are not adhering to guidelines can face fines between $50 and $75. While many have said in the past that they were following what their safety seat manufacturer mandates suggested. Now everyone must follow the laws, and the manufacturer recommendations for a child’s age and weight have been nixed from the new law, which is how some were able to squeeze out of tickets in the past.