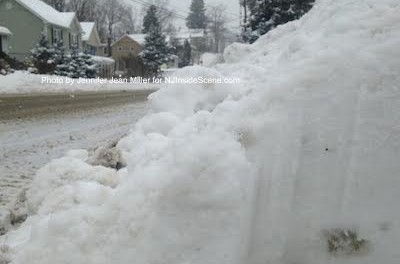 NEW JERSEY – With the arrival of icy weather over these last couple of weeks it’s a good time for a reminder/public service type of message.

When it’s icy out, it’s best to stay off the roads and stay safe. If you don’t have to travel, don’t go out — period. If you don’t know how to drive additionally in icy and snowy conditions, or do not plan to clean off your vehicle, please also stay home (one such example was on Tuesday night when I was one of many stuck on Route 206 after a head-on collision occurred when a driver did not clean off their vehicle and snow blew around, obstructing their view and causing them to crash into a vehicle in the oncoming lane…thankfully, injuries were minor though the two drivers were taken away by ambulance).

Some may be saying, “That’s easy for you to say,” in suggesting one stays off the road, with a job that mostly allows me to work remotely.

For those who may feel that way, I will just reply, “Don’t judge,” because I’ve been where you are.

Before I was blessed with the opportunity to have a position where I could work from almost anywhere (though I do have to venture out from time to time in bad weather), I can say I clocked plenty of hours on the road, with a commute close to New York City for several years and then to Morris County for over six years. During those days, I witnessed plenty of strange traffic accidents due to the weather and thankfully, was not involved in any myself.

There were more times than I could count that I honestly had no business being on the road. In fact, those driving with me shouldn’t have been either. But likely we were all in the same boat…having employers who did not offer other options, or those that guilted you to drive to work even in the worst of conditions.

In my first job, barely out of college, I white knuckled it many mornings in one of the worst winters, driving daily towards Jersey City from Sussex County. That year, we had ice storm after ice storm…and snowstorms with a foot or more at a clip. One morning, I drove to work, arriving to my destination about two hours later, only to be sent home a half hour afterward, because the building was closing. In another instance, I drove down and then around noontime (after about a two hour commute), decided to leave, with the snow coming down in buckets. I made it almost to the Stickel Drawbridge on Route 280 in Newark more than two hours after exiting the Turnpike.

Thankfully, I’ve always been pretty directionally savvy…and this was in the days before GPS, though there were cell phones (though not common)…little did I realize that Route 280 had closed and it was a good thing that someone I was speaking to navigated me off the ramp into Newark. I eventually landed on Bloomfield Avenue, which it was suggested I take Bloomfield Avenue, which I made my way through Newark and then traveled that and other roadways all the way to Fairfield. Once I arrived in Fairfield and onto Route 46 West it was smooth sailing to Sussex County…however, the ride through all of the cities and their stoplights, yielded about a five-hour drive in that weather…for a total of eight hours on the road without stops.

I have always been an adventurer, thankfully and have enjoyed driving. Though I will admit, I’ve navigated through some scary conditions, which I wasn’t thrilled with, but did fine. I spent four years in college in New York State and with a car up there after my freshman year and a boyfriend back home, I had plenty of practice with commuting between the two points in all types of weather…especially snowy and icy. Up there, they hardly if ever close and as a student teacher, I was relegated to driving to school on a daily basis through snowy weather. Their idea of snow and ours range differently, with it commonplace for heavy machinery to rid of snow on a daily basis…yet classes and work to still be on as usual. 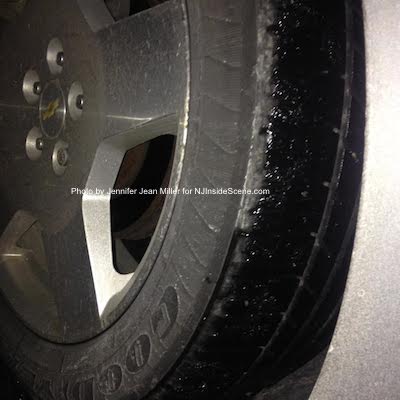 Icy tire with an icy surface can be a combination for disaster. Photo by Jennifer Jean Miller.

Recently, I had a déjà vu moment from one of those days, when I saw footage from Interstate 84 in Pennsylvania and some accidents that took place there. I remember very well coming home one weekend and sitting in an endless stream of stopped traffic, as if we were sitting in a parking lot –- unusual for this roadway. I stepped out of my car as other motorists did, onto what was like an ice rink…a sheet of ice literally coated the road.

“Must be some kind of accident up there,” one girl said.

Finally when the traffic a couple of miles ahead began to slowly move, engines started up again and we all returned to our cars, we were able to pass the site of an accident that involved seven cars – all ditched on the side of the highway face forward in snow banks, spun around facing the traffic, banged up horrendously in some cases, with all of the drivers and passengers noticeably absent. I prayed as I drove by wondering the fate of the drivers and passengers.

No matter what you drive, you are not safe on icy roads and are not immune to the possibility of a crash. And to boot, as shown in this photo below, the cold right now is so extreme, the other night my tires picked up the wet roads…and then the surface water on them froze. So…frozen roads plus frozen tires can be a sign of a complete hazard.

According to IcyRoadSafety.com, between 2008 and 2009, 477 people died during their travels on icy roadways and from 2009 through 2010 458 died from traffic fatalities from slick surfaces…the average of those two numbers is 467 fatalities per year.

In 2010, the state with the highest traffic fatalities was Pennsylvania – this reading area’s neighbor from where many also read this site — with 26 deaths…seven of those during one freezing rain event on Dec. 13. Over that season in New Jersey, one New Jersey death from icy surfaces was in Morris County and the other, Warren.

With the most recent storms, one of the most frightening incidents was one that a driver filmed while on the New Jersey Turnpike. An accident with two tractor trailers in front and careening from behind was another tractor trailer…flying at a high rate of speed erratically on the roadway. That truck almost hits the driver stopped who is filming and ends up flying over the guardrail into another spur of the Turnpike, whipping around with pieces of the truck falling off, before coming to a halt. The rear trailer to that truck appears to be further pushed by another vehicle, and a car looks like it is in the shoulder with flames nearby.

One of the other hazards on the road, no matter how skilled we think we are at driving are drivers like this trucker who simply don’t care how they drive…or like the driver on 206 who decided not to remove the snow from their car the other night. It’s best to avoid travel if possible to keep safe from incidents like these.

However…an ideal world does not necessarily exist. Case in point…some online discussions recently about the roads on social media with people commenting to others that if drivers are scared, they should just stay home…that no job is worth it.

Easier said than done in some cases. When an employer is threatening you their way or the highway in a tricky job market, drivers may feel they have no other choice but to go to work…or be shown the door. I know the feeling from the days I was at one job, which refused to close during a hurricane that was imminent…even though our Governor at the time had called a State of Emergency. I left slightly early anyway and it took some time to arrive home. I was one employee who was ridiculed for leaving early. I was one of the ones who made it home safely that night…and one of the managers doing the ridiculing complained rigorously the next day about all the downed trees they contended with on the way home and how long their commute took.

Employers should not be hassling their employees when their personal safety is at risk, but it unfortunately does happen…and workers in some cases feel they have no choice.Bottom line is if you feel you must travel to work or another destination in bad weather, there are some tips for traveling in the snow and ice that are featured on IcyRoadSafety.com.

On My Mind: Stay safe everyone…hope this article and these tips have been helpful. Please share this article to help educate others about the dangers of driving in inclement weather and freezing temperatures.