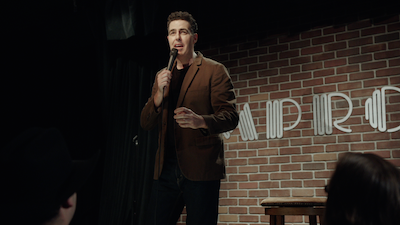 Newton, NJ  – Comedian Adam Carolla will perform at The Newton Theatre on Sunday, January 17th at 8:00 pm. Tickets will go on sale to the general public on Friday, November 6th at 11:00 am.

Not Taco Bell Material is a New York Times Best Seller and now a one man show written and performed by Adam Carolla about growing up poor in Southern California’s San Fernando Valley. Told as a succession of hilarious stories,  Adam recounts his awkward childhood and teenage years through the many absurd family episodes that shaped his extraordinarily dysfunctional upbringing. Pulling no punches, Adam exposes with pictures and video the ridiculousness of his 60’s era Hippy parents raising their kids on good vibes, top ramen and government cheese.

Adam Carolla is best known as a comedian, actor, radio personality, television host and NY Times best-selling author. He currently hosts The Adam Carolla Show, which holds the Guinness Book of World Records for “most downloaded podcast”, and stars on Spike TV’s Catch a Contractor. His latest book, Daddy Stop Talking, was released in May 2015 from Harper Collins Publishing.

Adam started The Adam Carolla Show podcast with only a computer and a microphone from his home office in February 2009, going on to receive more than 20 million downloads a month. His immediate success prompted Adam to launch an online network known as Carolla Digital in February 2010 which produces many of iTunes’ top podcast programming.

Adam became a New York Times best-selling author when his book In 50 Years We’ll All Be Chicks topped the charts for ten weeks. The audio version went straight to the #1 on iTunes. He has since released two other New York Times Best Selling Books, Not Taco Bell Material and President Me.

Adam began his career on the nationally syndicated radio program Loveline with Dr. Drew Pinsky. MTV developed a television version of the show, which was co-hosted by Adam and Dr. Drew for five seasons (1996-2000). Adam co-created (with his partner Daniel Kellison, and Jimmy Kimmel) and starred in two hit Comedy Central shows, The Man Show (1999-2003) and Crank Yankers (2002-2005).

A native of Southern California, Adam currently resides in Los Angeles with his wife, Lynette and their twins.