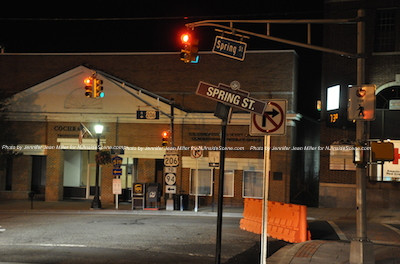 There are still some who drive the wrong way on the new one-way Spring Street, in spite of prominent barriers and signage. Photo by Jennifer Jean Miller.

NEWTON, NJ – While town council members praised the efforts from town employees for their hard work on ensuring the one-way construction schedule on Spring Street remained on time, the work from the State Department of Transportation in the green, was another story.

Council members talked about the changes near the green area at the meeting on Wed., Sept. 16. 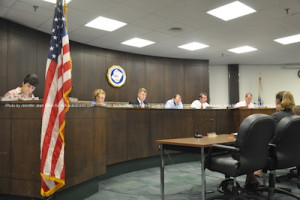 The state has refused to paint lines in particular crosswalk areas after Spring Street was changed to one-way, even though the state changed the direction of the traffic flow from Main Street and repaved the street from around the green.

“The treatment is despicable,” said Newton Mayor Dan Flynn, of the way the DOT has left the roadway after the project. 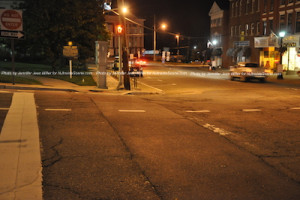 One of the crosswalk areas that has not been repainted since the state has redone the roadway. Photo by Jennifer Jean Miller. 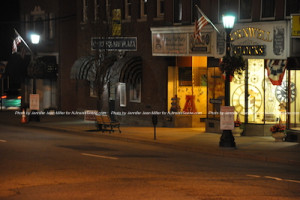 One of the unmarked crosswalks by Cornwall Clocks. Photo by Jennifer Jean Miller.

Councilman Wayne Levante had noted an issue about pedestrian safety, with the unmarked pedestrian crosswalk by Cornwall Clocks. Levante noted that it is difficult to see the crosswalk when one loops around from Main Street onto Spring Street, especially when navigating the turn into the traffic flow at 25 mph. 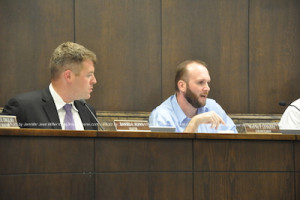 Mayor Dan Flynn (left) and councilman Wayne Levante (right) during the discussion about the crosswalks in Newton. Photo by Jennifer Jean Miller.

Some residents have told Levante that they are surprised by the crosswalk, and fear that they must stop abruptly, and could possibly be rear-ended by cars following from Main Street, or the line of cars flowing from Spring Street.

Another subject of angst has been the cars and even trucks that still venture onto Spring Street, making a right turn from Main Street. There are not only signs alerting to the one-way, but a large orange barrier blocking a portion of the roadway. Deputy town manager Debra Millikin also pointed out that GPS’s are still pointing drivers in the direction of the one-way, making a right turn in the opposite lane of traffic. 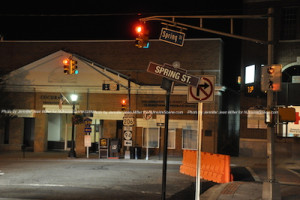 There are still some who drive the wrong way on the new one-way Spring Street, in spite of prominent barriers and signage. Photo by Jennifer Jean Miller.

Levante also inquired about the timing of the lights, turning left after coming off of High Street. Levante said that the lights are not synced. He also said that the traffic flow heading onto Water Street is especially causing dangerous situations for pedestrians as cars head past Aberlour on Trinity Street, all the way to the ShopRite.

Parking on Jefferson Street was another topic of discussion, through one of the ordinance drafts the council talked about. Resident Margaret Cosmos who lives on Halsted Street said that parents heading to St. Joseph School will often park on both sides of Jefferson Street, blocking residents who live adjacent to it. On her property in particular, which has parking behind the residence on Jefferson Street, she said there are often difficulties entering and exiting the parking area. Deputy mayor Sandra Diglio said that sometimes cars are waiting in the middle of the street as well, making it difficult for traffic to pass. Though there are signs forbidding parking in certain areas, drivers are not adhering to the regulations. Cosmos said that parking on Halsted Street is also “a zoo” on both sides, with people parking nearly to the curb, making it difficult to exit left from Jefferson Street onto Halsted Street. She expressed the issue could worsen on Halsted Street, though near the Halsted Street School, there is typically plenty of parking, though few who are near the St. Joseph area, will park and walk from that distance. 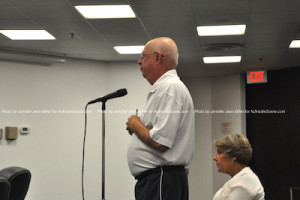 On Spring Street, though many have expressed they are pleased with the addition of the new parking spots, council members said that some business people are abusing the parking on the street. Levante suggested enforcement must be stricter, and that for some in business, it is the “cost of doing business,” for which those making a considerable salary will not mind paying the fines for the convenience of closer parking. Levante suggested that rather than parking tickets, the town should place boots on tires of offenders to hopefully avert them from the practice in the future. 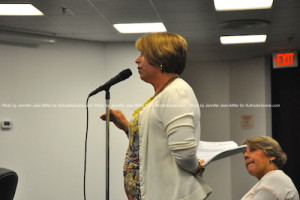 Sara Megletti of PB&J Stores speaks to the council about parking near Spring Street. Photo by Jennifer Jean Miller.

Sara Megletti from PB&J Stores stated that she was misquoted in the paper as knowing who the offenders were that are parking on Spring Street in the one-hour parking for the full day. For her customers, she said, she has suggested if they are planning to patronize the Spring Street businesses for more than one hour, to park in the lots. She also said that the officers on patrol on the street are the “best eyes and ears,” and discussed an app that could help them to follow up on the time that a car is parked on the street, rather than chalking car tires.

The council discussed an ordinance draft that will clarify pet leash requirements. Town manager Thomas S. Russo, Jr. said the new recreation supervisor Debbie Danielson has reviewed the requirements, especially in park areas like Memory Park. Russo said that the ordinance would explain that pets are welcome to the parks, as long as they are properly leashed and cleaned up after. Leashes should not exceed six feet in length, and those who walk dogs should be no less than 12 years of age. 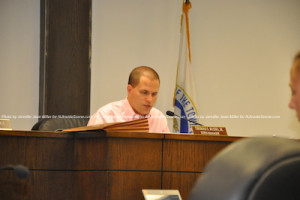 A third ordinance of interest was about safety, forbidding objects to be thrown from windows. The police noted activities on places like Spring Street, where, for example, residents were witnessed tossing keys down to another party standing on the sidewalk. Officers felt that activities of this nature could cause injury to a party and should not be permitted.