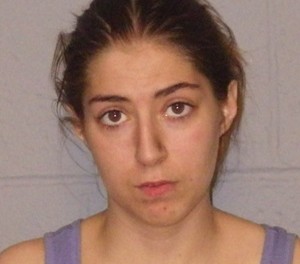 CHARGES: Hindering the apprehension of another and resisting arrest

ANY OTHER INFORMATION: The officers went to the 4C’s motel to arrest Rikki Bell Age: 19  on a Bergen County Superior Court no bail warrant.  They listened through the door and could hear Scavone talking to a female. The officers knocked on the door and announced who they were.  They heard Scavone tell the female something but they could not make out what he said.  He then opened the door.  The officers asked for and showed Scavone a picture of Bell.  He stated that it was his ex-girlfriend and she was not there.  He let the officers in.  Sgt. Antonello found Bell hunched over behind a broken door in the bathroom.  She was arrested on the warrant. Officer Luciani told Scavone that he was under arrest. Scavone pulled away from Officer Luciani.  Scavone was put in an arm bar but continued to pull away.  He was taken to the ground by Officer Luciani.  He was handcuffed and taken to the Police Department. A $1,000.00 warrant out of Paterson was found on Scavone.  Paterson would not pick up Scavone and gave him a new court date of 01/05/15.  He was given his charges and released.  Bell was charged with Obstruction by Sgt. Antonello. Bail was set at $1,000.00 from Hopatcong Municipal Judge Bowkley.  She was given over to the Bergen County Sheriffs Department.