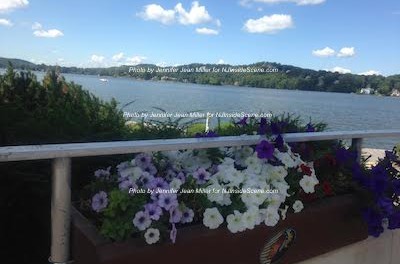 A real estate transfer took place between the Lake Mohawk Country Club in 2012 and the Leos unbeknownst to most Lake Mohawk residents, until the legal notice appeared on July 24 for the planning board’s public hearing at the Sparta Township Municipal Building on Wednesday, August 5.

The Leos were seeking additional property to increase their area surrounding their swimming pool and property overall.

Many of the residents had concerns about their property rights and if divvying beach properties could become the norm, with a resident at Monday night’s meeting expressing that another resident near Beach 4 (Gahonjonton Beach on East Shore Trail) has been eyeing up property there for annexation to their property — a request that has reportedly been denied for many years.

Residents at Monday’s meeting also held concerns because of Greg Leo’s role on the trustee board and if it presents a conflict of interest (Leo also owns the Lake Mohawk Pool and is a known real estate developer who owns The Leo Companies). The real estate transaction occurred prior to Leo’s service as trustee.

According to a Facebook Post on the Lake Mohawk Pool’s Facebook Page in 2013 when Leo was seeking office, his affiliation as a Lake Mohawk resident commenced in 1987 as a summer and part-time resident who owned a cottage on the lake. The family relocated full-time to Lake Mohawk in 2004 and he moved his business to town at the same time.

The club’s by-laws, specifically Section 16 “Conflict of Interest,” mandates that “the trustees shall at all times act in the best interests of the Club. Where a conflict of interest is or may be involved, the Trustee or Trustees so involved shall disqualify himself or themselves from participating in or voting on such matters. The Trustees shall be the sole judges of a conflict of interest and the Trustee or Trustees so involved shall not be eligible to vote in such determination.”

Leo was not present at the meeting on Monday, with fellow board members citing his absence due to a prior family engagement that evening.

A copy of the contract, redacted without the header of the attorney’s office that initiated the transaction, has been circulating around via email and those who told the board that they obtained a physical copy were also given the same, without indication as to who drew up the contract. The contract was drawn between the Lake Mohawk Country Club and the Leos noting the sale from April 30, 2012, though it was not signed officially by the Lake Mohawk Country Club’s then president Dennis Keefer (attested by Ernest W. Hofer, then secretary) until July 16, 2012 and the Leos on July 19, 2012. On the contract that has been circulating, no witness was listed adjacent to the Leos’ signatures. 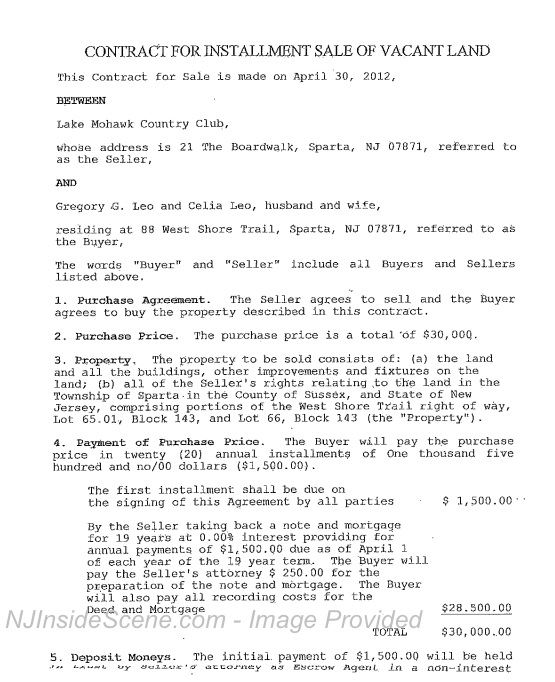 The property sold to the Leos does not indicate size on the contract, but specifies in the contract the club sold the land and buildings along with improvements and fixtures of the land. In return, the Leos put down a $1,500 payment with the attorney holding that in escrow until the transfer title. The closing was unclear, with it specified on May 15, 2012 at the “seller’s attorney’s office,” which was 20 Main Street, Suite 101 in Sparta, the address of the club’s former attorney, George Sweeny (Sweeny passed away on May 25, 2015). 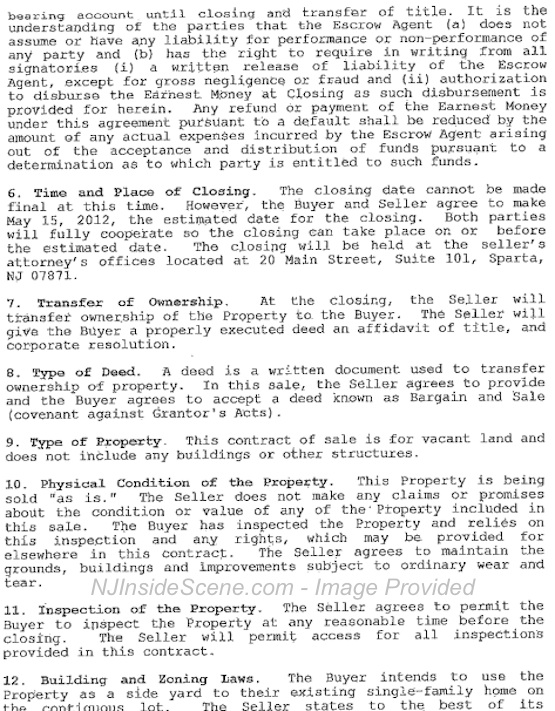 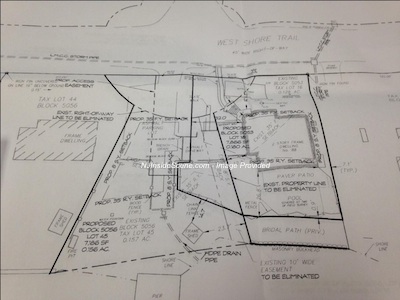 Residents who requested minutes from the Lake Mohawk Country Club property line transaction said that this document was not attached to the contract of sale. Image provided.

The contract notes a mortgage at zero percent interest due annually every April for 19 years, plus the buyer’s payment of the club’s attorney costs of $250 to prepare the note and mortgage.

Club members are asking the board for further measures taken before the said transfer fully occurs. One of the other concerns was that there was reportedly no recorded vote taken on the transaction, though some have vouched it was done in executive session. Yet, nothing was notated. Resident Paul Johnson suggested that those on the board review the Open Public Meeting Act and Open Public Records Act (OPRA) for meeting recording guidelines, stating that record of the executive sessions should have been retained with “enough information for a reasonable person” who may research at a later date. Johnson, who researched the files with resident Bill Greenlaw noted that no vote was recorded on the minutes.

Greenlaw spoke several times during the meeting and indicated the same. He questioned the contract’s validity because there was no vote taken, asked why the header on the copy he received was redacted and suggested the offer was likely expired due to the time that has passed since the document was signed in 2012. Greenlaw said that mistrust has now developed amongst some residents.

“Many members wonder if there are other undisclosed deals,” he said.

“We as Lake Mohawk Country Club members have been blocked to access our land,” he said, “We want it back.”

He suggested the contract should be voted on for cancellation.

When the board was asked if any rent was being paid on the land, audience members were told no rent was received.

One resident also said that the club’s former general manager, Fran Smith, rejected the sale many years prior and the transaction should be rescinded.

Representatives on the board asserted that the contract from 2012 was valid. The club also vouched it was authorized to sell club property on behalf of the membership.

The evening grew heated several times as residents called out and the board’s president, Gregory Yuskaitis banged his gavel to restore order.

Donald Newmark was another resident who challenged the board, posturing himself strongly in front of the board, indicating that by trade he is an attorney. Newmark asked that the board do its moral and fiduciary duty.

“Why don’t you have the guts to go to the membership?” he asked.

When one board member fired back, “Excuse me, I don’t need a lecture,” Newmark countered, “Yes you do.”

Newmark and Greenlaw both grilled the club’s attorney Megan Ward of Kelly & Ward in Newton, claiming Ward was overheard at the planning board public hearing stating that she would “consult with her client” that night in a recess and referred to that client as Leo.

“We are your clients as well,” Newmark said.

Ward denied representing both interests and said that Leo was pro se in the matter. The legal notice reflects that Kelly & Ward LLC was “Attorneys for the Applicants” with the applicants listed on the notice as the “Lake Mohawk Country Club” and “Gregory and Celia Leo.”

When asked why it has taken three years for the Leos to finalize the land deal, members of the board absolved Leo of the responsibility and said that it was on the end of the club, additionally blaming the contract as inappropriate. One resident took exception to comments made about the contract and felt blame was being wrongly placed on the club’s former attorney.

Some residents suggested to the board to cancel the original contract based on its ambiguity and allow Leo to fight it.

“He [Leo] is benefitting, we are not,” the resident stated.

Later in the evening, Newmark asked Ward what arguments she could take to void the contract. She replied that it was not appropriate for discussion at that time and the intention was to listen to the residents then filter through the information.

Chris Aldrich took to the floor and said that he was a member of the board in 2012.

“When the deal came up it stunk,” he said.

Aldrich said he was uncomfortable with the deal at that time and could not believe there were no meeting minutes. He also said there was no exhibit to the contract and that Leo “makes his living buying and selling properties.” He told board members if they allow this to happen that their credibility will also be questioned.

Others tempered the discussion with the contributions that the Leos had brought to Lake Mohawk. Patrice Kullman for one explained her history at Tamarack Beach since childhood and said that Greg Leo “has been down there hammering docks” and Celia Leo organized movie nights, planted flowers, dug up weeds and removed garbage from the premises to help. Kullman felt it could be discussed with the Leos and worked out.

Jennifer Phillips said that she grew up at Tamarack Beach as well and there was invalid information floating around. She also said she did not personally side with many of the views expressed during the course of the evening, though some statements were made by individuals stating they were speaking on behalf of all of the club members. She felt it could be worked out reasonably between the Leos and the club.

Donna Zimmerman also said she had heard positive commentary about the Leos and if all that she had heard was true, he would not be unreasonable in working together with the club and its members for an amicable agreement.

Resident Todd Muth said he does not live by Tamarack Beach but “all beaches are impacted with this issue. I’d like to see our beaches stay intact as they are.”

Another club member, Bill Dermody, said that the contract additionally misrepresented the land itself, with the 2012 contract headed “Contract For Installment Sale of Vacant Land,” while Dermody pointed out that the land was not vacant, but a beach that residents use for recreational purposes.

With concerns that property rights could be subject to new legal precedence, a group of Lake Mohawk residents has also taken action with a petition against the measure. 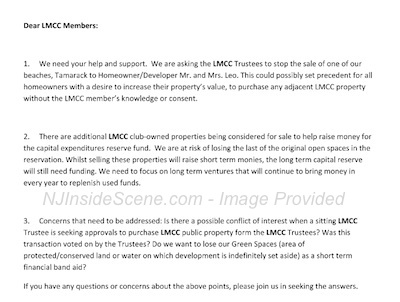