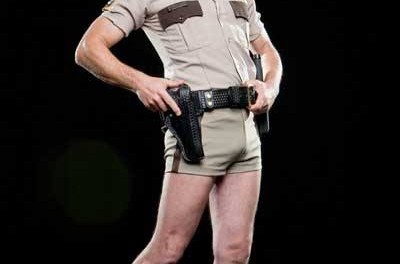 SUSSEX COUNTY, NJ – After law enforcement from across the country flooded Facebook Pages and chat rooms with discussions about Councilman David Fanale of Franklin Borough New Jersey’s choice of a profile photo with the cartoon Calvin, giving a middle finger and urinating on the fallen officers’ symbol, NJInsideScene.com, had an opportunity to interview Fanale via a discussion on Facebook and phone.

Fanale told NJ Inside Scene that the use of the cartoon was not out to intentionally hurt members of the police department, and when the publication asked if he planned to apologize for use of it, he said, “No.”

NJ Inside Scene has asked Fanale what has triggered his attack against police departments. He described law enforcement officers as “submissive pawns that don’t have to enforce unjust laws.”

“They can choose not to enforce arbitrary laws,” he added.

When the author of this story asked Fanale why he is challenging police, rather than lawmakers, he has said that top down action has not been effective, but bottom up is. He had said after speaking to local legislators, he considered it fruitless and did not receive answers, and what he described instead as “lip service.”

Fanale explained, “I’ll have contempt and I despise law enforcement. Public safety I don’t have a problem with.”

Fanale said his quest to become a “better American,” began in 2012, when he took animal cruelty investigation classes, for his business Garden State Wildlife Control. He said after the election, he saw what the Republican Party was specifically doing, and described their methods as “evil,” and refocused his direction.

Fanale describes himself as following a Libertarian Philosophy. He stated that laws now are restricting Americans, and described it as the comparison story of placing a frog in a boiling pot of water – that a frog jumps out when water is boiling, but if a frog is placed in water that is comfortable and then eventually brought to the boiling point, the frog will not realize the water is boiling until it is literally in danger.

He said that the implementation of the Bill of Rights has declined and the society overall needs a “serious wakeup call.”

What has been the main trigger for Fanale has been what he states, was what he viewed a violation of his individual rights, and especially the rights of his fiancée, Kerry Hodgson, when they were stopped in Roxbury Township New Jersey in 2013, with what he stated was without just cause.

In his discussion on the topic with NJ Inside Scene, as he has written online, he described the two officers as “pigs.”

He said he was not speeding, was in a parking lot, and simply waved to police officers when the stop took place.

“It was deplorable what they did to my fiancée, she was not deserving of that,” Fanale added.

Fanale said during the search, he let the officers think he was “John Q Public.”

“I let them go on with the abuse and unconstitutional search of my truck and Kerry’s belongings,” said Fanale.

Fanale said that the officers searched through the vehicle, and Hodgson’s purse, without just cause. He said that she placed the purse on the ground, and officers accused Hodgson of carrying a weapon in it.

He said he spoke to a police chief friend of his, who advised him to file an internal affairs complaint. He described the incident as a targeting of “two model citizens,” and was disillusioned by the internal affairs investigation.

“I tried to be nice, it didn’t work,” said Fanale on addressing publicly what occurred in Roxbury. “I’m continuing to draw attention to this plague in our society called law enforcement. I don’t have plans on stopping.”

Fanale himself worked in the profession, he said, first as a dispatcher in 1993, and then beginning the next year as an EMT. He commenced service as a medic in 1997 in the southern part of the country. He lived in Pennsylvania, he said, and then tried to seek reciprocity for his emergency service employ in New Jersey, but found the requirements too “onerous.” He said although he had an exemplary reputation as a medic, he made more money working in a tree service business, as he was waiting for reciprocity.

He feels, those in the emergency services profession, as he looks back, complain and whine excessively, basing it as well with his experiences in the field.

“They have the biggest cake job,” he said. “Life isn’t good for them, it’s great, from the dollars they steal from the general public.”

During the interview, NJ Inside Scene, which voiced its opinion on this topic in a column yesterday, which expressed upset, and explained to Fanale the upset in the law enforcement community and if he planned to apologize, he replied no.

“Unless they are Franklin residents,” he said, “they have no say in the matter.”

While Fanale has said he did not know the meaning of the symbol that the cartoon was urinating on, and that it was not something he was familiar with during his term of service with emergency services, he is not upset for creating distress in the law enforcement community.

“I am not politically correct,” Fanale said. “They need to man up and put their big boy panties on. They are a bunch of whining little girls. These guys are the most immature bunch of pu**ies, I have dealt with in my life.”

When NJInsideScene.com inquired of Fanale if he planned to apologize to a New York City Police officer, who emailed a letter to Franklin Mayor Paul Crowley in upset to the urinating cartoon, and who lost his wife, another New York City Police Officer, in 9/11, he also replied, “no.”

“I am speaking publicly about what people are saying in private,” Fanale added. “When I was campaigning in Franklin, there were more complaints about the police department than anything in my campaign.”

Fanale has voted against initiatives such as “Click It or Ticket,” because he feels it violates a person’s rights and choices. He considers it an arbitrary law by lobbyists. Though he added, “I wear my seatbelt because I feel it’s the right thing to do to protect me in an accident.”

Fanale said that he knows a law enforcement leader in Sussex County, who he refused to name, does not wear a seat belt, because the individual believed that a seatbelt caused a particular death in an accident. He feels wearing or not wearing a seat belt should be a personal choice.

When asked if he read the press release that Fraternal Order of Police 57 of Franklin Borough had written, Fanale replied, “no.”

“I don’t think about police unions, and I’m not going to legitimize them. They [FOP 57] mean nothing to me,” he said. “I don’t care what the FOP thinks. Unions are all the same. They are bullies and thugs. It’s organized crime.”

Fanale released this statement to NJInsideScene.com, which he posted on his personal Facebook Page, in friends only view:

“As a semi-free American, any personal, fact-based opinions of mine have absolutely no influence on my position as councilman. Any considerations of council matters are based on their application to civil liberties as outlined in our Bill of Rights, and I will not assent to any ordinances that would usurp those rights without the consent of the governed. Any material which I personally share in a semi-public forum, or on a personal social media page is irrelevant to the council, no matter how much the deranged law enforcement establishment wishes them to be.

That being said; I was sincerely unaware that the logo/emblem used in the meme was representative of fallen officers. Whether it was intentional or not, this spectacle which the police have created is a direct example of their contempt for the rights of Americans. Perhaps the public should consider challenging a fundamentally corrupt criminal justice system which pervades the entire spectrum, especially within law enforcement, begin to question the neo-soviet society which the law enforcement community AND our lawmakers are explicitly responsible for creating, and demanding that the persistent abuses of the public by the police be investigated by outside, private services to reduce the tendency of corruption.

Until the members of our society who are privileged with providing the public’s safety begin to deny themselves of the “us vs. them” mentality and turn away from the “warrior”, the “paramilitary” mentality, and stop perceiving themselves as “soldiers” and the public as the enemy, I will continue to light the brushfires in the public’s mind. The challenge of established beliefs doesn’t make someone wrong, especially when one is focusing on principles of sound reasoning, and fact-based logic.”

He added in a Facebook message to NJInsideScene.com, “Elected officials shouldn’t unconditionally support or condone irresponsible, reckless behavior from public servants. To the contrary, they should strive to maintain transparency and hold public servants accountable wherever necessary.”

In the meantime, police officers from around the country have continued to voice that Fanale should resign, and have rated down the Facebook Page of Fanale’s business, Garden State Wildlife, bringing it down from a five star rating, to a 1.5.

He describes the attack on his business as the “clear reflection of the mind of the law enforcement officer.”