NEWTON, NJ – The milling and paving portions of the Downtown Newton street refurbishment project was completed by Wednesday August 12, the date the town had anticipated for that segment of the project.

Milling of the street commenced as scheduled on August 11, with Spring Street closed for a period as the milling was underway, though the day kicked off with rainy conditions. Traffic was diverted to Trinity Street via Union Place, as well as on Madison Street. The lanes heading towards Spring Street from Union Place and Hampton Street were closed.

As the paving took place, the state worked on their half of the paving project in the square on Main Street, where the right turn lane had been removed and lanes of traffic are now diverted to Route 206.

Construction on the lower portion of the project continued until the end of the business day, while Spring Street in the downtown was reopened first for traffic and police directed cars away from both sections alternatively towards Trinity Street and Madison Street. Officers were stationed on Trinity Street at Hampton Street and Union Place during construction.

Tilcon handled the milling and paving portions of this project. 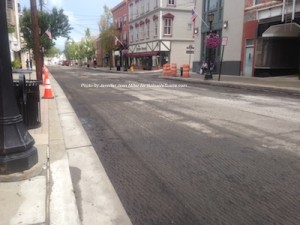 The road after it was milled on Spring Street, looking in the direction of The Newton Theatre. Photo by Jennifer Jean Miller.

The process to transform Spring Street into a one-way started on July 28.

Still for completion are the “bump-outs” in front of The Newton Theatre as well as on the corner of Spring and Main Streets. Crosswalks are slated for installation. Re-striping of Spring Street and parking spots are also planned. Parking will eventually be permitted on the left side of Spring Street, where it was formerly the lane of traffic coming from Main Street, with 20 more spots. Another highlight to Spring Street will be the decorative area in front of the Newton Fire Museum, which will be accented with brick pavers and an “N” in its center. This section will be a focal point during parades and Newton Day.

The work for the traffic signals on Trinity Street on the corners of Union Place and Moran Street are in process, along with sidewalk upgrades on Trinity between Moran and Union.

Downtown Newton businesses have remained and will continue to remain open for business, and parking is free in the following lots through September 11, 2015: Lot #1 (Adams), Lot #4 (Central Plaza) and Lot #5 (Eastern Plaza).

Weather permitting, officials on site during both the milling and paving portion of the project said the project end date is still currently set for September 7.