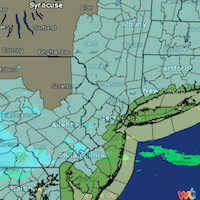 Radar image of the anticipated winter storm, predicted to arrive on Monday, Jan. 26. The green band on the map shows the area of greater accumulation, forecasted to be historic for New York City, Providence and Boston, with some experts indicating the cities could be shut down. Image courtesy of Weather Underground.

SUSSEX COUNTY, NJ – It has been predicted to be the storm to potentially shut down coastal areas from New York City to Boston.

Described as a “textbook nor’easter,” the weather experts at Weather Underground have coined this storm with adjectives such as “crippling” for cities including New York, Boston and Providence. The storm has the potential to also be one of the ten biggest on records, with accumulations of 24 to 36 inches.

For the Northwest New Jersey area, a Winter Storm Warning is in effect from noon on Monday Jan. 26 through 6 p.m. on Tuesday Jan. 27, signifying that the severe wintry weather is imminent, with significant snowfall and strong winds.

Accumulation predictions for the area range from 14 to 24 inches.

The storm in all areas will impact travel, including mass transit and air travel. Visibility during the storm will be limited, with one quarter of a mile at most at times expected. Windy conditions will also create drifts as the storm progresses. There may be an impact on the commute Monday morning.

The snow is expected to arrive in Northwest New Jersey after midnight and before 5 a.m., with the heavier snowfall later in the day and the potential for the snow to fall at a couple inches per hour through Tuesday morning. The snow is predicted to taper off on Tuesday afternoon.