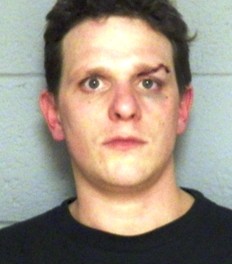 IF THEFT WHAT AND VALUE: Accused was caught in the act but ate a banana and took gum from the home

ANY OTHER INFORMATION: A neighbor called the homeowner to tell her that a male who has been wandering around the neighborhood had entered her home.  The homeowner then called the police.  When the officers arrived they found the house secure.  They heard someone inside.  The officers surrounded the home and called to the person inside.  Baglio who is known to the officers opened the door and mumbled that he could explain.  Baglio then became nervous. He was ordered to the ground but did not comply.  Baglio tried to go upstairs but was grabbed by the officers. Baglio broke free and tried to punch Sgt. Wojtach. Detective Sutphen punched Baglio on the left side of his face which allowed the officers to take Baglio to the ground.  He was handcuffed and taken outside.  There were other residents outside, as well as the homeowner who just arrived.  The homeowner did not know Baglio. As he was being taken to the patrol car she questioned him why was he in her home. The officers were told by the neighbors that Baglio was seen wandering around the street and appeared very suspicious.  The homeowner went through her home and found it was rummaged through.  Baglio was taken to headquarters, processed and later brought to the Sussex County Jail in lieu of bail.  At the jail he resisted Officer Sadowski and Detective Sutphen’s control.  He pushed away from Det. Sutphen while cursing at him.  Baglio was then turned over to the Sussex County Correction Officers.