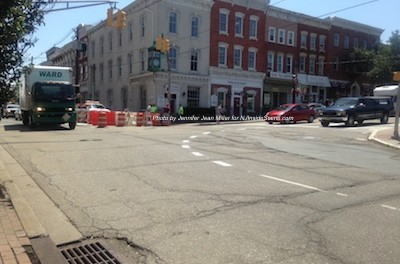 NEWTON, NJ – Construction has commenced to turn Newton’s Spring Street into a one-way street. Additionally, work is also beginning on Trinity Street to create traffic signals at the intersection of Trinity Streets and Union Place and Trinity and Moran Streets.

On Spring Street, the street was intended for conversion to one-way on Monday, July 27, though that occurred on Tuesday, July 28. Work began on lower Spring Street for depressed curbs with Tony’s Concrete working on that end of the project and then workers are planned to work on the downtown area of Spring Street on Wednesday, July 29 near Madison Street.

On Tuesday, the New Jersey Department of Transportation (DOT) officially lessened the amount of lanes from three lanes to two lanes from Main Street headed down towards Spring Street, with the right hand lane that had previously been there fully eliminated. Denville Line Striping was the contractor that performed the re-striping on the road. 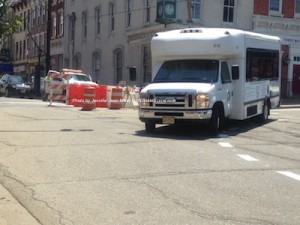 A bus pulls from Main Street to Spring Street with the blockade on the street preventing two-way traffic. Photo by Jennifer Jean Miller.

Newton Police, including Chief Michael Richards and Lieutenant Robert Osborn, Deputy Town Manager Debra Millikin and members of Newton’s DPW were stationed during the day at the corner of Main and Spring Streets, which was blockaded in the lane where the former alternate was.

Millikin said depending on the weather, which could create delays, construction is anticipated to last through September 7. That would include: paving, milling, creation of new crosswalks, parking spots on both sides, creation of decorative outcropped areas by The Newton Theatre and Newton Fire Museum and the new traffic signals on Trinity Street. 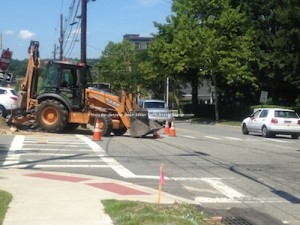 Downtown Newton is open during construction as Spring Street and its businesses will be. Additionally, lots including in town will offer free parking through September 11, 2015 at Adams (Lot #1), Central Plaza (Lot #4) and Eastern Plaza (Lot #5).

Traffic flowed smoothly throughout the day and during construction in the square area, though after the contractors had left it became heavier than usual with rush hour with traffic heading around the square flowing from Main Street, into the two new lanes and then as it poured onto Water Street. Another snag was an unexpected accident near the Busy Bee and Sussex County Community College by Swartswood Road and Mill Street where a vehicle hit a utility pole, which further impacted traffic as it diverted onto Clinton and Mill Streets, then up towards the square as cars were rerouted away from the accident scene.