One of the musical acts later in the festival. Photo by Jennifer Jean Miller.

WALPACK, NJ – The scenic Rosenkrans Farm overlooking the Delaware River was the site for the Middleville Music Festival on Saturday, October 4. 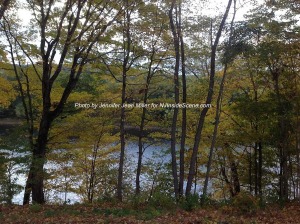 A scenic view of the Delaware River behind the Rosenkrans Farm. Photo by Jennifer Jean Miller.

A presentation of Brook Falls Farm, the event gathered an all-day lineup of musical talents, and groups interested in raising awareness for environmental causes. 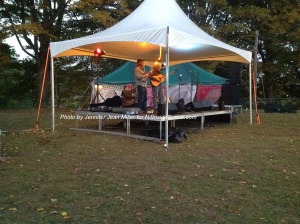 One of the musical acts takes to a smaller stage during the event. Photo by Jennifer Jean Miller.

The rainy weather did not deter attendees from enjoying the festivities earlier in the day, and the weather cleared later on, with the moon rising over the farm, with the temperatures cooling down in the evening. The event, which started at 10 a.m., concluded at 10 p.m. There were healthy food vendors that had items for sale, and Skylar’s Lemonade & Apple Cider Stand was on hand, donating a portion of the proceeds for a local animal shelter.

The moon rises over the Middleville Music Festival. Photo by Jennifer Jean Miller.

There were vendors with items for sale, and Body & Sole Massage Studio had a massage chair at their area, where attendees could take a break for a massage with several of the massage therapists at the event.

Environmental groups such as the Skylands Group of the NJ Chapter Sierra Club, was handing out information at their table. An upcoming screening of the film GMO OMG, coming up in Newton, a free and open to the public event, was one of the items discussed with members of the group, including Susan Williams, the group’s chair. Williams also spoke about the potential privatization of water and sewer resources in Sussex Borough. Timebank was another concept the group offered information about, where talents are exchanged, as well as Transition Newton and NW New Jersey, a concept with a mission to lessen dependency on fossil fuels. The group participated in the People’s Climate March in New York City.

Another point of interest was environmental activist Elizabeth Nelson’s anti-fracking mobile. Nelson has made cross-country treks to educate the destinations she has traveled to about the dangers of fracking, making her way to 36 states over 156 days. One of her major concerns is fracking in the Delaware River Basin. During her trips, she has made her way to support groups, including the Elsipogtog Nation in New Brunswick, Canada. More recently, Nelson has talked about a ban of fracking waste in New Jersey, that was originally a bill in the New Jersey Senate and Asssembly (S1041/A2108), and passed in the assembly, but was vetoed in the senate in August 2014. She mentioned, however, that the City of Elizabeth would like to enact a ban on fracking waste from entering its borders. 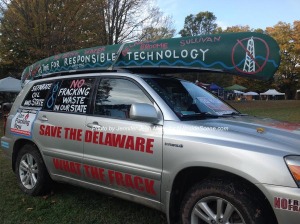 The anti-fracking mobile that made its way across the continental United States and into Canada and Alaska. Photo by Jennifer Jean Miller. 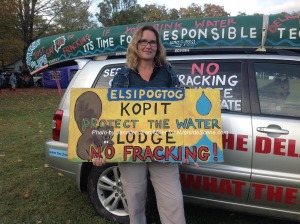 Elizabeth Nelson holds up her sign about the Elsipogtog Nation and stands in front of her anti-fracking mobile. Photo by Jennifer Jean Miller.