Blessid Union of Souls concert, courtesy of One Inning at a Time.

FRANKFORD TOWNSHIP – Hap Rowan was not feeling well for a while, and was dealing with vague symptoms, including pain and heart palpitations, which took about eight years for doctors to fully understand and make a diagnosis.

Hap is a Sussex County resident, who lives in the county with his wife, Mary, and three children. He grew up in the area, having graduated from High Point High School, and was a student at SUNY (State University of New York) Orange, where he played baseball.

Having been a baseball player, and lived an overall healthy lifestyle, Hap would have periods in which his health was not troublesome, while he did not realize instead that a rare carcinoid cancer NET (neuroendocrine tumor) was setting into his body.

While playing baseball (he was invited to a tryout that the Cincinnati Reds held at Dover High School, while recruiting talent from the area), one of his coaches instilled in Hap an adage that he has applied to his life, and especially, the experiences with his illness, “It’s good to have goals, don’t always look too far ahead,” he was told. “Just look at it one inning at a time.”

According to the NET Cancer Day website, NET Cancer is described as an “umbrella term for a group of unusual, often slow-growing cancers, which develop from cells in the diffuse endocrine system.”

NET Cancer is represented by a black and white zebra-striped ribbon, because doctors are reminded that, “When you hear the sound of hoofbeats, think zebra.”

That is because NET cancer is a silent cancer, which often mimics other symptoms, and is misdiagnosed – one of the reasons why it took eight years for Hap’s doctors to reach a diagnosis.

Steve Jobs, the visionary, founder and CEO of Apple, Inc., was diagnosed in 2003 with NET Cancer in his pancreas. However, Job’s death, to some medical professionals, is attributed to his shunning of traditional therapies early on, which in turn, allowed his cancer to persist.

For Hap, doctors at Sloan-Kettering detected a pelvic mass, which they coined a “carcinoid” or slow-growing neuroendocrine tumor. The tumor spread to some of his lymph nodes. Some of the mass was in his liver, which required embolization. Embolization helps to starve the cancer cells in the liver of the blood flow.

For Hap, the treatments to begin eradicating the cancer were very hard on his body. Having been an athlete his whole life, he has endured the disease and procedures better than some who were not in as good health to start with.

“Mary took the task of leading the charge,” Hap said of his wife. “Many times, I was too ill to do anything.”

Other procedures, in addition to the embolization, have included: radiation and a surgery.

There have been side-effects, as the cancer cells have been dying off, which have included fevers, which Hap has battled as the tumors raged with hormones, trying to hang on in his body. He had also dropped a considerable amount of weight.

Hap next proceeded to a special trial last year for other NET Cancer patients, for which he must head into Memorial Sloan-Kettering Cancer Center in New York once a week.

There are up and down days for Hap, and up and down weeks, and he still sticks with his adage, to take it one inning at a time.

Hap has support from many friends, who have reached out to drive him to New York on his treatment days. His co-workers at CP Engineers & Architecture, are friends who have driven them there. Also, then-Assemblyman Gary Chiusano (now Surrogate) and Senator Steve Oroho (R-24), have also taken him into the city.

“To me,” he stated, “Steve and Gary aren’t just elected officials…they are lifesavers.”

Oroho, and Chiusano felt so strongly about it, that they and their counterpart Assemblywoman Alison Littell McHose (R-24), sponsored a resolution designating Nov. 10 as Neuroendocrine Tumor Cancer Awareness Day.” 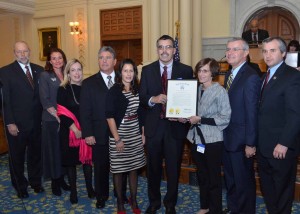 The day that NET Cancer was recognized by the State of New Jersey in a proclamation.
Photo courtesy of One Inning at a Time.

As part of also raising awareness about NET Cancer and to benefit the foundation One Inning at a Time,” a group which helps to provide funds to families in need who are struggling with the impact of cancer (the group has helped eight families), a benefit concert is being held on Saturday, Nov. 9, at The Newton Theatre, for a benefit show at 8 p.m.

The band, which has been a favorite of Hap’s for years, is known for such hits as “I Believe,” and “Hey Leonardo (She Likes Me For Me).”

“They’re a perfect fit for it [the benefit concert],” said Hap. “Their music helped me through some really tough times.”

Last year, the group had its performance at the theatre, on the same day as the official Neuroendocrine Tumor Cancer Awareness Day.

Lead singer of the group, Eliot Sloan, has forged a friendship with Hap and family. They are so acquainted the two call each other up to frequently chat.

“Eliot Sloan is just amazing,” Hap said, as he dialed for NJ Inside Scene to speak with him.

“We’re looking forward to you coming out,” Hap told him.

Eliot replied that the band has been in rehearsals, is ready to take special requests, and is looking forward to coming to New Jersey.

“He’s got such a great heart,” Eliot said of Hap. “He’s been a fan of our music for a long time.”

When asked about playing in New Jersey, after playing all over the United States and world (Hap said that he first saw Blessid Union of Souls perform at the Sussex County Fairgrounds in 1996), Eliot replied about playing at The Newton Theatre, “We love playing theaters. They were built for great sound and performances. It’s much more personal. I’m confident it will be a great show.”