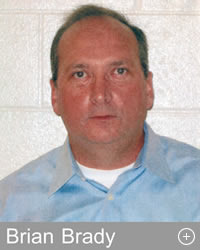 Brian Brady of Sparta, courtesy of the New Jersey Office of the Attorney General.

TRENTON – Acting Attorney General John J. Hoffman announced that a suspended police captain with the New Jersey Human Services Police has been convicted at trial on charges that he misused police databases for personal purposes.

Brian Brady, 52, of Sparta, was found guilty by Superior Court Judge Andrew J. Smithson following a six-week bench trial in Mercer County. Judge Smithson found Brady guilty of second-degree counts of official misconduct and computer theft. Each of those charges carries a sentence of five to 10 years in state prison. The official misconduct charge carries a mandatory minimum term of five years without parole, while the computer theft charge carries a period of parole ineligibility equal to one-third to one-half of the sentence imposed. Brady also will be required to forfeit his public position and will be permanently barred from public employment. Judge Smithson has not yet scheduled sentencing.

Judge Smithson acquitted Brady of other counts of official misconduct, theft by deception and tampering with public records. Those charges related to allegations that Brady submitted fraudulent time sheets that indicated he was working when he was traveling for personal pleasure or business, and that he used a state vehicle, state gas card and state-issued E-Z Pass on the personal trips. They also related to allegations that he filed fraudulent firearms qualification certificates.

Brady, formerly a councilman and mayor in Sparta, was the third highest ranking officer in the Human Services Police, reporting to the chief and the director. DHS immediately suspended Brady when he was charged by complaint in May 2011. The Human Services Police provide police services at the developmental centers and psychiatric hospitals operated by the Department of Human Services. They also are assigned to protect offices and case workers for the Division of Youth and Family Services.

“This captain apparently thought that the rules of his department and the laws of this state did not apply to him, because he repeatedly broke them to suit his own purposes,” said Acting Attorney General Hoffman. “This verdict demonstrates that nobody is above the law.”

“This police supervisor repeatedly treated a restricted law enforcement database like his personal information clearinghouse, even running background checks on all of the members of his minor league baseball team,” said Director Elie Honig of the Division of Criminal Justice. “There’s no room in law enforcement for this type of rogue behavior. I commend the trial team and investigators for ensuring that justice was done in this case.”

The state presented testimony and evidence at trial that Brady directed a subordinate employee to conduct background checks on members of his minor league baseball team using the FBI’s National Crime Information Center (NCIC) database, a secure database that is strictly regulated and restricted for police purposes. He also directed subordinate officers to use the police database and state databases to run a background check on a home health aide he was considering hiring for his mother.

Acting Attorney General Hoffman and Director Honig noted that the Division of Criminal Justice has established a toll-free tip line 1-866-TIPS-4CJ for the public to confidentially report corruption, financial crime and other illegal activities. The public can also log on to the Division’s webpage at www.njdcj.org to report suspected wrongdoing.